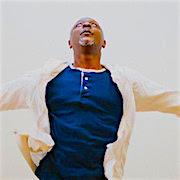 Opening June 14 at Yerba Buena Center for the Arts, the roughly one-hour work features the eight dancers of his company, Robert Moses’ Kin, along with guest performers and a sound score and text by Moses. At its core, the piece involves reflection: mirror images, body imagery, life as a dancer, telling stories through choreography set on one’s own and other bodies. Aging, race, reinvention, and mortality underscore the more granular, specific-to-dance elements.

In an interview, Moses tells two stories that are at the heart of the new work. Although they did not entirely launch his investigations, reflecting on them became a foundation or touchpoint and are key to how life intersects with art in his creative process.

“I was taking my son to see George Clinton at the Marin County Fair. My son is 11. On the way over, there were a group of friends on their annual college reunion. I sat down with them. One guy rides a bike 8 miles to work. I looked at him and thought to myself, ‘That’s a lot.’ He said something like, ‘Yeah, you don’t usually see an old, fat, black man on a bike.’ I thought, ‘What have we lost? What else do we not see?’”

Moses says that when he began Kin in 1995, African Americans were about 13 percent of the population in San Francisco. Today, that number has shrunk to 5 percent. “You don’t see that many black people,” he says. “What’s disappearing? I was thinking of the bike guy — his saying that with my son next to me. I went, ‘wow, this is something shoved in my face: the idea of mortality.’ I was starting new traditions with my son while thinking how I might disappear someday. How do you reoccur? How does your legacy go on? Without being down or dour, I was thinking, ‘Where is my place?’”

A second memory, recalling Mr. Dewey, a neighbor from his childhood, resulted in a similar reflection on stories lost, unseen, forgotten, or remembered. “Mr. Dewey was huge,” says Moses. “He’d sit outside on a little teeny stool that was nowhere near his girth. Other than his outside — a big, fat man — what did I not know about him?”

Admitting that “a lot of things crash when work is coalescing in your head,” Moses says the title includes heavy “extremes,” but if one word is primary, it’s “phoenix.” According to Moses, the dance he is making is about rebuilding, living different lives, finding rebirth.

At 56 and agile, Moses is by no means “exceptionally” aged or weighty. Those words hold importance mostly because of their association with mortality. As a young male dancer, he says age and weight bias weren’t overbearing, but his height and skin color were often pre-determinants. “I was short and black. I wasn’t going to be a prince in ballet,” he says.

He remembers the first time — at 11, the same age his son is now — when he was stopped by the police. “I never told my mother. I knew it would scare her. Now, being black is wrapped up in the fear. As an artist there are corners you get painted into: the way the company looks, the voice you have.” He resists definitions that might limit his work, instead claiming multiplicity that better describes him: teacher, choreographer, dancer, son, father, husband.

“Putting in a row all these lives I’ve lived for 56 years — of thinking creatively, being a black person, being a father — I’d be hundreds of years old. I’d be like that big man, sitting on a stool that carries his weight but is not big enough for it.”

Even so, with the new work, Moses has added another identity. Although he has previously written the complete text for a dance, he has never before composed all of the music. “I have to shed hiding behind a collaborator. If you hide, you’re not figuring out the primary centers.” About the results he says, “I’m trying to create music that has an emotional tone. It’s not just there by itself; ignored or used like a slave. The music is a creature. I’m creating it using a computer, but it’s not atonal or distorted. It’s music with melodies, rhythms, and structure you’ll understand. I’m most interested in the emotional impact of the sound.”

Which rides in line with his perspective when it comes to selecting company dancers. “I can coach anyone who has ability or experience, but you have to have a point of view. I’m looking for someone who makes me jealous. Someone who can make a note soar in a lot of pitches. I’m not interested in someone who can only bring me what they’ve learned: they need to bring me a life, color, opinions. Otherwise, all I’m getting is an echo.”

Nevabawarldapece, a new, live dance-and-music-and-spoken-word extravaganza choreographed by Robert Moses, is fitfully brilliant, yet at times hard to read.

The troupe’s mélange of percussive dance with cutting-edge electronics and live music brings down the house at Yerba Buena Center for the Arts.