“When you’re a Jet, if the spit hits the fan, you got brothers around, you’re a family man.” This lyric really gets to the crux of West Side Story — who are your brothers and “family.” West Side Story is beloved by so many … and has always been a bit complicated, hasn’t it? Sure, the plot springs from Romeo and Juliet, but with a lens on New York with two rival gangs pitted against one another. It’s just that, while one of the gangs is comprised of newly emigrated Puerto Ricans, Latino directors and casting have rarely played into its execution.

That changes now. Opera San José’s final production of the season, conducted by Christopher James Ray — and their first musical theater performance ever ­— is West Side Story, stage direction by Emmy award-nominated international director Crystal Manich. The response has been electrifying — OSJ just extended the run of the show, adding a seventh performance, after having to postpone the original production date in 2020.

“What made me love the piece was the music, certainly the dancing, and also the fact that Puerto Ricans were even a subject of an American musical,” said Manich. “That, to me, is what blew my mind when I was 12 because I had never heard the term Puerto Rican uttered in a pop culture way at the time.”

In “America” Rosalia sings about wanting to return to Puerto Rico for a visit, when the audience can see she wants to go back permanently … but take the American TV with her, something Manich said her father experienced when he moved to the mainland from Puerto Rico.

Looking back on her introduction to the musical, watching Rita Moreno — the sole Puerto Rican performer in the 1961 film — left an indelible mark on Manich, who’s Puerto Rican. The OSJ production is her first-time stage directing West Side Story but has been a long time coming.

“I’ve waited a long time to find the right moment. I knew I was going to direct it at some point,” she said.

She had watched the 1961 movie (she hasn’t watched the 2021 Spielberg version yet) and seen several live productions, but in reading the script she noticed mistakes with the Spanish. Unlike opera, ad-libbing provided an opportunity to introduce more Spanish into the show.

“I wish the text were also allowed to have flexibility because I do think that West Side Story could benefit onstage from having more Spanish in it,” said Manich.

She described how the Latino audience has been underestimated in terms of the quantity of media, television and film consumed, noting that as a group they are the second most frequent viewers of television, and that the trendline is going up.

“I think that the arts now are constantly talking about how we need to be more inclusive of Spanish-speaking cultures, in addition to others obviously, but Spanish is so popular in the United States — it’s spoken almost as much as English. You go through Spanish Harlem and anywhere in Miami — not just the Cuban area — you could survive and live there without speaking English.”

With tight contractual parameters on how West Side Story may be produced, Manich said she was able to “work around all of that, trying to find my own way in and how I wanted to depict Puerto Rican culture on stage.”

This included staging the prologue differently from the traditional, dance-driven approach showing the back and forth between the gangs. Instead, she’s adding in small scenes of their daily lives that grow into an all-out fight. The audience gets a glimpse of what Bernardo and Anita’s life looks like and how the Jets see and respond to that. Then, the Sharks and Jets coexist at Doc’s with the Sharks minding their own business playing dominoes, the Jets minding their own business at the jukebox, but then an altercation happens.

“We start to see that tension build so that we understand that — even more so than race — I really believe that West Side Story is a clash of cultures and a lack of understanding and a desire to not understand the other.” Manich said. “That's really what I'm showing is that the core of the conflict between the two sides, because we have cast both gangs very diversely, and it's because one of the first stage directions when I sat down to read the script for the first time was that the Jets are made up of a group of guys who are an anthology of what is considered quote unquote American.”

Tenor Noah Stewart will be playing Tony and has been described by The Independent as “a young Black tenor from Harlem with a radiantly open sound.” Trevor Martin will play Riff, with Jawan Jenkins as Action, and Leandra Ram as Anybodys. Philip Skinner is playing Doc. Manich applied that same perspective used with the Jets to the Sharks, too.

“People are very surprised when I tell them I’m Puerto Rican because I'm really pale. And then you have to go through the history of Puerto Rico and say, we are descended from Europeans and from Africans and from all of the mix that came from mainland America when Puerto Rico was absorbed by the U.S. government and, of course, indigenous people,” said Manich. “And so, when you have all of that mix, you realize that it's actually the same mix as what you have in mainland United States. So, in a way, what I'm saying is that the Sharks and the Jets are really no different from one another except for the perception of what is the other and what is culture on both of those sides.”

Music is also a unifier between the Sharks and the Jets, who both let loose to the mambo during “Dance at the Gym.”

“We have to remember that these gangs are made up of young people in their teens who are at the forefront of pop culture in a lot of ways,” said Manich. “Music is going to be part of their fabric.” The song Manich is most excited for audiences to see in this production is “Somewhere,” depicting Tony and Maria’s dream sequence.

“I’m dedicated to this idea that they actually dream of a very simple life rather than something that is out of reach, and something that they know — it has to do with New York and how they navigate the city,” said Manich.

Because yes, West Side Story is a love story between the two ill-fated lead characters, but also to the city of New York as both groups fight it out for their stake of it, little realizing that while differences exist, that passion for their place in the city is something they share.

West Side Story will be playing at Opera San José from April 16 until May 1, presented live at the California Theatre in downtown San José. For tickets and more information, visit operasj.org or call (408) 437-4450. 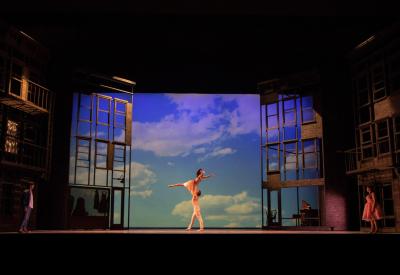 Spielberg Gets It Right With West Side Story

Tony Kushner’s new screenplay is at the center of the adaptation.

West Side Story: A Dream Realized

The incredible sound of the San Francisco Symphony, and the spirit from the musicians, singers, and MTT, combine for the finest sounding West Side Story you are likely to hear.

Bernstein’s still-vibrant musical gets a thrilling account at the Paramount from the Oakland Symphony and a bevy of strong soloists and choirs.

Making use of a variety of community partnerships, the company intends to welcome back its audience for a full season.

The general director’s vision has resulted in a remarkable series of video productions that have shown the company in a whole new light.

A five-month search ends with the appointment of well-respected stage director Shawna Lucey.