Credit a child-size piano in a Korean kindergarten classroom and spirited, healthy competitiveness for the music phenomenon otherwise known as the Ahn Trio.

The Korean-born Ahns — pianist Lucia, her twin sister and cellist Maria, and their younger sibling, violinist Angella — all trained at the Juilliard School of music and have performed at the White House, Lincoln Center, and Buenos Aires’ Teatro Colon, among other venues. Their collaborations include projects and recordings with rock bands, pop singers, dance companies, and visual artists. Immensely photographical, the Ahns have participated with ad agencies whose clients include fashion companies and national magazines. Classical music recordings and cross-genre albums result from a broad spectrum of inspirations; Angella’s and Maria’s appearance on Bryan Adams’s MTV Unplugged, Maria’s lifelong idolatry of David Bowie, the trio’s particular fondness for Brazilian bossa novas, and more.

Bringing a diverse repertoire to open the 2019–2020 season of Four Seasons Arts on Oct. 5, the program’s primary themes are discovery and exploration. Their program, titled “In Celebration of Man on the Moon,” arrives as people worldwide note the 50th anniversary of Apollo 11’s moon landing. “A program should be something that absolutely engages the audience and one where you take them somewhere. Music transcends, takes you from where you are to another piece,” says Angella in an interview.

On the program are Leonard Bernstein’s 1937 piano trio; Pat Metheny’s original composition, Yu Ryung; two works by David Bowie, one originally written with Metheny (This is Not America), another arranged by Kenji Bunch (Space Oddity); David Balakrishnan’s Skylife, arranged by Bunch; Lucia’s arrangement of Jiha Park’s Sounds Heard from the Moon; and Flying Machine, composed by Mark Baechle for the Ahn Trio.

“Not every piece is about the moon or sky,” says Angella. “Pieces relate in a way of discovery. The Bernstein trio, he wrote when he was a student, so it’s his discovery of the form. Pat Metheny we believe had never written a piece for trio, so that was new for him. Flying by Mark Baechle, because we’ve flown so much, we hear in it the absolute beauty of being in space, and also, the turbulence, the crashing! More than anything else, he brings out the sisters; sibling rivalry, arguments, then peace. It’s so much about the three of us.”

But all trails lead back to Lucia’s habit of landing on a piano bench to pound out a few notes. “We wouldn’t have gotten into music if it weren’t for Lucia. She fell in love with that little piano. She would climb up on it constantly. The teacher finally suggested my mom get her lessons. Maria and I didn’t want to be left out. We credit Lucia entirely because If she didn’t have that initial interest, who knows what would have happened?”

Although their parents are not musicians, they loved classical music and it remains likely the sisters would have had interest in careers or at least hobbies involving music. Recordings and broadcasts played constantly in their childhood home and Angella recalls going to operas, ballets, and concerts from a very young age.

Moving to the United States when all three girls were under age twelve and accepted into Juilliard’s precollege division, the Ahns found sanctuary. “We moved to New Jersey where everyone was white and sports were big. We didn’t fit in. But in precollege, everyone was like us: they loved music. That woke up the passion for us.”

Passion has led to perspectives that see the influence of Beethoven, Bach, and Brahms in today’s rock, pop, electronic, minimalist, and world music. “We gain depth, space — by being creative and open. Instead of looking at a score one way, you observe how the dancers are inspired, what they find in their creative juices. You gain their wisdom, artistry, and imagination as well. You become a bigger artist.” Especially with dance, Angella says the energy and arc of a composition are revealed in novel, visceral ways.

Turning attention to works on the upcoming program, she highlights the piece by Park. “We fell in love with her Sounds Heard from the Moon. Because the original instruments Park plays are piri, yanggeum, and other traditional Korean instruments, Lucia’s arrangement sounds very ethereal. There’s a slow groove to it and even though there’s pizzicato, there’s an orbital, circular, otherworldly feel.” Capturing its mysterious mood requires establishing the color within mere minutes. “You don’t have 30 minutes as you do in a symphony to get into it,” says Angella.

A subtheme to discovery and exploration might be supersonic time. Metheny’s Yu Ryung rocketed into existence after Maria crossed paths with the American jazz guitarist’s wife in New York. “She told her we’d been inspired by his music for years. He emailed us and said he’d write a piece but would have to study the art of writing a trio and maybe take a year to do the research.” Instead, Metheny sent a new trio within days of the email. “When we read it for the first time, we knew it would be effortless. The structure made sense. He came to rehearse it with us and just to be with him was incredible.”

Asked about balancing a performing life with her sisters, Angella says skills used to study music — listening thoughtfully, paying attention to details, and patience — are invaluable. As is time. “We’ve come a long way. As we grow as musicians, we’ve grown as people. Right now, we’re more appreciative of each other. We talk about the amazing experiences we have as a trio of sisters. You’re doing the most intimate thing, making music together and then sharing it with audiences. But the part that’s difficult with sisters is that with arguments, it’s not possible to just go separate ways or break up. We’ve had to work through difficult things. At the end of that, we say ‘wow, we’re continuing, we appreciate each other.’ We can have the biggest, silliest fight in rehearsal over how to end a phrase, then go out to lunch and laugh about some other thing.” 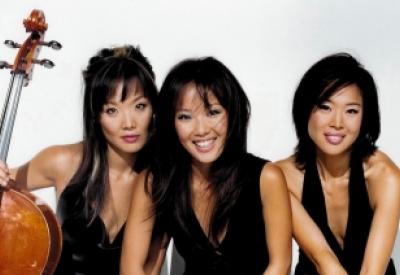 Music from the 1990s shows its age in [email protected]’s final festival concert of 2019.

In martha & monica’s concert at Old First Church, contemporary composers held their own against heavy hitters from 100 and 200 years ago.