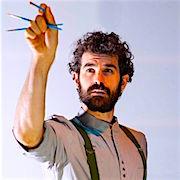 Spend Sunday in the Park with George at S.F. Playhouse

The ever-ambitious and daring San Francisco Playhouse is preparing for a long run of Stephen Sondheim’s Sunday in the Park with George, July 5 through Sept. 8. Company Artistic Director Bill English, who directs the production, is both expectant and apprehensive:

“This is a show I have always cherished and yet been terrified to bring to the stage because it feels so personal,” English says. “The story exposes the vulnerability of art and how that deeply affects the artists who create it. Sunday in the Park with George examines how artists struggle to balance their passion for storytelling with the desire for intimacy, and is more resonant than ever, reminding us how essential art and artists are to a free and compassionate society.”

Sondheim, universally acknowledged today to be one of the greatest composer-lyricists of musicals, took years to score a hit on Broadway. The reason: complex, sophisticated, unusual works that transcend the “Moon-June” genre.

Despite success with A Funny Thing Happened on the way to the Forum (1962), inspired by the farces of the ancient Roman playwright Plautus; the funny/sad look at relationships and vulnerability in Company (1970); the Ingmar Berman-film based A Little Night Music (1973), and the dissection of Admiral Perry’s “opening of Japan” in Pacific Overtures (1976), it was the blood-and-guts horror story of Sweeney Todd (1979) that won Sondheim his biggest audience approval.

Among similarly rich and demanding Sondheim musicals that followed, the 1984 Sunday in the Park with George is a look at the creative process through the life and work of the painter Georges Seurat, who died at age 31 in 1891. The musical won the Pulitzer Prize and was nominated for 10 Tony Awards including Best Musical.

Seurat is best known as a pointillist artist, using a technique of painting in which small, distinct dots of color are applied in patterns to form an image. Along with Paul Signac, Seurat developed this rigorous technique in 1886, which established it as a distinct branch of neo-impressionism.

Seurat’s most famous painting, A Sunday Afternoon on the Island of La Grande Jatte, is the setting, background, and cast of Sondheim’s musical as the scene comes to life, with dialogue and songs that tell about the characters and their relationships beyond the canvas, and Seurat and his fictional model/lover Dot in focus.

The curtain opens on an empty, white stage with George sketching:

White. A blank page or canvas.
The challenge: bring order to the whole.
Through design.
Composition.
Tension.
Balance.
Light.
And harmony.

In a coup de théâtre, as George is speaking, the white stage is transformed into a park on the island of La Grande Jatte. “Trees descend onto the grass; a bottle glides into view; a cut-out couple appear in the distance. The lighting gives the impression of early morning.”

English says of the work:

It is a love poem to artists, poets, painters, composers, and playwrights. It celebrates the voices that celebrate us, holding the artist up, saying, “We need you. We can’t live without you because you see us. You lift us up out of the muck of our ordinary lives and lead us to ourselves.”

Seurat invented a new way of seeing. His fascination with the science of color led him to use techniques that could deconstruct and recombine reality into a powerful perspective that exploded the art world. His work was so revolutionary and angered the established art world so that his work was completely suppressed.

Despite his ability to see, he himself remained unseen, never getting a major art show. He never was part of a mainstream art exhibition, nor did he ever sell a painting. We say, “How can that be?” It reminds us that we must support new voices, new perspectives, new visionaries, not only in the world of art, but in our own world in the theater.

Despite being his "baby" project, Saturday Night evinces the wit and maturity that characterize Sondheim's more famous works.

A new TheatreWorks revival of Sweeney Todd comes together in channeling the mad drive of the Sondheim classic.