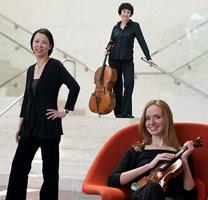 "The Bay Area is the perfect place for the Stanford Pan-Asian Music Festival," said Jindong Cai, Stanford faculty member and founder/artistic director of the seven-year-old Festival. From Feb. 2-14, this year's Festival centers on the theme “From the Steppes,” and features a dense array of singers, musicians, composers, dancers, and poets from Iran, Tibet and Central Asia, with collaborators from North America, including the New Pacific Trio, the New Spectrum Ensemble and Ballet Afsaneh.

There will also be art installations and symposia (some in Berkeley, in conjunction with the University of California), with scholars from East and West discussing the art and cultures of these lands — and a special focus on Mongolia and its traditional and contemporary performing arts, its famous throat-singing, virtuoso horse-head fiddle playing and (think about it) a presentation on Mongolian hip-hop.

"When I visited Mongolia last year," said Professor Cai, "I was amazed by the vibrancy of its arts and cultural development. Mongolia, as well as the entire Central Asian region, has been overshadowed for a long time by its more powerful neighbors. But through the Festival we want to show what they do today with their own music.They still do traditional Humi singing, but also hip-hop and ethno-jazz fusion, and some of their their composers have adapted the horse-head fiddle and the ‘Long Song’ into Western orchestral format."

The horse-head fiddle, Cai continues, "is closely related to the nomadic life Mongolians led until about 1930, riding all day long. It's a significant cultural symbol, like a soul instrument. If you walked into a yurt, there would be one high on the wall, and in the old days, only the men in the household could play it. Men still are the majority of players. And the horse-head fiddle doesn't just symbolize making music, but the whole culture — and reviving the culture: the last president of Mongolia issued an order that every Mongolian family have a horse-head fiddle."

Composer and scholar Simon Wickham-Smith, who will present the program on Mongolian hip-hop, noted that "the World Bank places Mongolia as soon to be one of the fastest-growing nations, because of its mining potential. Since 1990, U.S. culture has been available to Mongolians. Their last president had a good relationship with President Bush. Despite a fairly rough infrastructure, Mongolians can now wear jewelry and ride in limos, but their hip-hop isn't so much a celebration of the new material culture as a way in which the younger generation can talk about life in the streets, the condition of the majority, excoriate the political system and criticize the new democracy."

But the Pan-Asian Festival doesn't stop with traditional music, modern composition and popular music. "The Mongolian National Opera and Ballet is completely Westernized," Cai said. "They have an opera house and theater and perform 14 operas, 14 ballets every year, all classical. We have the director of their ballet coming to give a talk. She went to Moscow at 12 to study for eight years, and came back to become a principal dancer, later the director of ballet and opera. Most professionals studied in the Soviet Union or Eastern Europe."

A Beijing native, who first encountered and explored Central Asian music within China, where these cultures are officially referred to as "ethnic minorities," Professor Cai co-authored with his wife, Sheila Melvin, the book Rhapsody in Red: How Western Music Became Chinese. Now, after 20 years in the U.S. “I felt I should bring Mongolian music and culture here to show to our community. People need to know more as Asia takes to the mainstream, to understand where they come from, to understand the culture with the music."