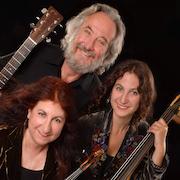 Old-time American roots music, taught orally and learned by ear most often serves social, spiritual, or political purposes. In addition to artistic value, the passing of a song or instrumental tradition from generation to generation has associations with parties, holidays, good times, family, falling in our out of love, church or worship, activism.

Asked if those features distinguish country, Cajun, bluegrass, blues, klezmer, fiddling, banjo, guitar, and other roots music from classical music, fiddler/vocalist Suzy Thompson at first agrees. But with a moment of reflection, she changes her mind.

Thompson is a longtime Bay Area band leader, founder of the Berkeley Old-Time Music Convention and a well-regarded fiddler/vocalist. She’s a member of the trio Thompsonia, along with flatpick guitarist Eric Thompson and the couple’s bassist daughter, Allegra Thompson. Her resume includes a four-decade string of recordings, tours, and appearances with award-winning bands, ensembles, fiddlers, and other old-time roots musicians.

“I’m thinking now of the classical music I studied as a child,” she says. “You almost had to read it off the page is what I was going to say — until I remembered learning long passages by memory. And passing along string music with the Suzuki method is done by ear. I suppose it saves time to have a score — to makes sure things pass down exactly or to keep a written record of a long composition. I guess we do that with all music.”

Which isn’t to say that the importance of moments when a single note is passed from voice to voice or from fiddle to fiddle isn’t vital. The Thompson family, along with a devoted community of roots musicians in the Bay Area, cherish the traditions of learning and playing by ear while embracing other ways to access music.

Allegra Thompson, who brings to Thompsonia both soulful bass playing and vocals self-described for one tune she performs as “present, low reverb, and not drippy,” provides a memory encompassing multiple influences. “I have a hazy memory of being at a music party, probably when I was in my early teens. There was a campfire. Someone was singing (Hugh Moffatt’s) Rose of My Heart, and I just liked it.” But she didn’t care for recorded studio versions she later sought when working on a track for a Thompsonia CD. The tempos were too slow and the albums were made when considerable reverb on vocals and instrumentation were the trend. “I changed the phrasing, sound quality, tempo.”

Access to multiple versions of the song and digital trails that led and continue to lead the 30-year-old bassist to other artists through YouTube, she says, keep the genre alive and expanding. “You no longer have to know somebody. You hear something you like and Google it. Click on a country singer, then to another person. It’s easier to get to the source, to old recordings, or to find other people with similar interests.”

Her mother remembers arriving in California in 1973, when as a female fiddler she was a phenomenon. She says that one of the positives of 21st-century college or conservatory roots-music programs is more support for women instrumentalist, not just vocalists. She mentions as examples the program being developed at California Jazz Conservatory in which Eric Thompson teaches a roots-guitar class and the American Roots Music minor offered since 2009 at Boston’s Berkelee College of Music. Regional styles are preserved, a sense of validation established; but there are cautionary aspects.

“It’s a good thing, but a kind of homogenization also, because students come out playing the same. In bluegrass and old-time music especially, there’s a fashionable way to play right now. It’s less idiosyncratic and that’s a loss,” she says. Recognizing deep players, musicians capable of virtuosity but loved because their music gets under a listener’s skin and transports people to “another place,” Thompson correlates attraction with intensity. “[With] some musicians, all I can think is, ‘How are they doing this?’ It’s organic, I don’t know words to describe it. I just can hear and feel it.”

Nothing But Rain, Thompsonia’s new CD, has its release during a double-bill show with Grammy-nominated fiddler Bruce Molsky at Berkeley’s Freight and Salvage March 14. Thompson says two themes emerged after completing the album. “Without trying, almost all of the songs have to do with water and came out of family groups, like ours is. We picked pre-bluegrass music from the South, [sung] in English — our favorites. We tried not to recreate the songs. We messed with them.”

“Messing” results in reconfigured traditional ballads, ragtime, and Depression-era tunes on the 10-track CD. “Boatsman” explores new sounds with a scordatura drop-D tuning. With the G and E strings tuned down to D, Thompson says the fiddle makes a sonorous, rich sound. “We took the field recording that’s solo fiddle and set it with guitar, which we also retuned to an open D chord. It slowed it down. The bass plays mostly one note, pulsing. It sounds like a water wheel.” Another song, “Rag Pickings,” is a classical-banjo rag from 1912, based on a recording by Fred Van Eps. “For 40 years or more I’ve been in love with the East Texas Serenaders, a picking band from Texas. I decided we’d try setting it like a 1920s Texas hillbilly serenade. It ends up sounding, except for the diminished chords, like a mix of “Maple Leaf Rag,” syncopation, sliding into the notes, and gaiety. It’s danceable, but not like a hoedown.”

And true to form, it has memory and purpose. The pre-Depression song reminds Thompson of pop tunes her grandmother used to sing. It’s levity, she suggests, is a perfect counterpart to modern day grimness and discord. Its purpose? Dance and create an old-time, up-spirited memory of your own.

Fiddling Around at the Berkeley Old Time Music Convention

Traditional-music mavens from around the country converge for a week of fiddle and banjo tunes, ancient ballads, workshops, sprightly dancing, and lots of jamming.