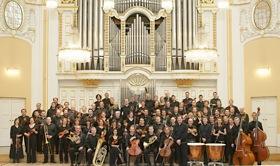 Rebecca Liao on October 5, 2009
On most weekdays, you can probably hear a collective groan on Interstate 80 from commuters traveling to and from the Sacramento area. Chances are, they just heard KDFC’s long-time host Dianne Nicolini announce that a perennial listener favorite was coming up, with the line, “But first, here’s Haydn [or his brother, son, nephew, second cousin twice-removed].” On Oct. 28, however, braving the commuter soundtrack to drive to the Mondavi Center at UC Davis (or simply staying put if you live near there) will be worth it, because the Mozarteum Orchestra Salzburg is presenting a piece that is both by Haydn and a favorite.

The 168-year-old orchestra is one of the premier symphony orchestras in Austria. Focusing on music from the Viennese Classical school, it presents the “Mozart Matinees” at the annual Salzburg Festival. Its musical sensibilities are particularly well-rounded, due to the variety of its repertoire: playing in the pit for musicals and operas for the Salzburg Landestheater, performing great symphonic works from all eras for the Salzburg Kulturvereinigung in the Large Festival Hall, and presenting a thematic series in the concert hall of the Mozarteum. The orchestra has had myriad glowing adjectives attached to its name at one time or other. In the end, though, it is simply very Austrian — more sensitive and less heavy-handed than the Germans, without any sacrifice in musicianship.

The program will begin with Mozart’s overture to The Marriage of Figaro, whose opening theme, incidentally, also opens the musical lock on the door to the edible garden in the original screen version of Willie Wonka and the Chocolate Factory. (Music Director Ivor Bolton looks better in a tux than Gene Wilder did.) It will close with Schubert’s Symphony No. 9 in C Major, also known as “The Great.”

Now, what about that Haydn favorite? His Cello Concerto No. 1 in C Major will feature Johannes Moser as both the soloist and the concert’s way of fulfilling the orchestra’s motto, “The cutting edge of classical music.” Moser may be our next Yo-Yo Ma, not because they play with similar styles, but because they are both enthusiastic ambassadors for classical music. Where Ma pairs with pop artists for crossover recordings, Moser promotes the Youtube Symphony Orchestra and participates in outreach activities with children and young adults across U.S. campuses, introducing connoisseurs of synthetic sound to prepared and toy cellos and pianos. Performing contemporary pieces is his signature. Even Pierre Boulez sings his praises, and he’s a much tougher customer than Bobby McFerrin.

There’s no doubting Moser’s musical heft. His tone isn’t quite commanding, yet his phrasing flows from a seeming sixth sense of the way in which musical figures relate to each other and of how to convince the listener that he’s playing a piece as it was intended to be played. In his hands, the cello seems to become a living being; we almost forget there’s a musician behind its sound. Is it something we have never heard before? Not really, but after Lang Lang’s appearance last month, shouldn’t we see what youth is really capable of?