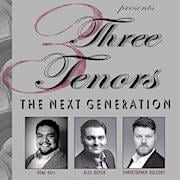 Three Tenors — The Next Generation Looks to the Future of Opera

At the age of 20, Pene Pati said he discovered opera, and at the time, knew only of Luciano Pavarotti. Pati learned all of his musical technique in the beginning from watching YouTube videos of Pavarotti. When the Three Tenors came on the scene, Pati said he was a “huge fan since day one” and later joined his brother and cousin to form the popera trio, SOL3 MIO. So, you could say things are coming full circle for Pati as he and fellow tenors Christopher Oglesby and Alex Boyer take the stage as the Three Tenors — The Next Generation. For one night only, Saturday, Feb. 1, Vallejo’s Empress Theatre will put on a performance you won’t want to miss. 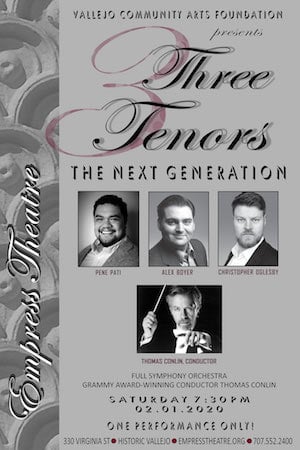 Pavarotti, José Carreras, and Plácido Domingo were well-established in their careers when they first performed as the Three Tenors. The Next Generation features three emerging vocalists, making the opportunity to see them perform at the cusp of coming into their own so enticing.

The San Francisco Chronicle described Boyer’s “large potent sound” in his depiction of Canio in Festival Opera’s production of Pagliacci as offering a “welcome measure of anguish and dark menace to the role.” The Washington Post depicted Oglesby’s “beautifully sensitive singing.” Last year, Pati debuted in the title role of Roméo et Juliette and brought down the house.

“To be part of a group with those two is actually great fun. I can’t wait,” said Pati. “The fact that the three of us have sung together, we can be serious in our own arias and at the same time with the three of us onstage, we can be playful.”

In the spirit of the original Three Tenors, taking opera outside the opera house, the Next Generation welcomes opera buffs and aims to introduce opera to a new audience, too. Pati spoke of the need for connection and making opera accessible.

“We are in that time that people see opera as a highbrow art form and they kind of feel like they don’t connect,” said Pati. “Opera is for anybody. Opera is for someone like myself. I’m a huge sports fan — I watch basketball. I play rugby, myself, and I also enjoy opera.”

Grammy-award–winning conductor Thomas Conlin will lead a full orchestra for The Next Generation. He approached the vocalists with selections for the evening, but allowed them to choose pieces, too. The program will include arias by Verdi, Leoncavallo, Donizetti, and others. Pati is excited to sing “Cielo e mar” (Sky and sea) from Amilcare Ponchielli’s La Gioconda in public for the first time. And he will solo on “Nessun Dorma” (Let no one sleep), an aria from Puccini’s Turandot that carries deep meaning for Pati. and that he clung to when he first left New Zealand to pursue opera.

“That song resonates with me so well, so the fact that I get to sing it with the orchestra at that concert is going to be quite emotional for me,” said Pati. “I don’t see it as a show-offy piece, I see it more as one that means a lot.”

SF Opera Merola and Adler program master teacher, César Ulloa, once likened Pati to a young Pavarotti, and he’s not alone in that comparison. Stepping into an aria so strongly associated with Pavarotti has its challenges.

“It’s an essential piece, which makes it kind of scary because everybody knows it — not only the opera buffs — everyone,” said Pati. “They’ve all got Pavarotti’s idea in their heads.”

The Three Tenors—the Next Generation will run for one night only in Vallejo on Saturday, February 1 at the Empress Theatre. Tickets run from $70–$200 and can be purchased at empresstheatre.com. 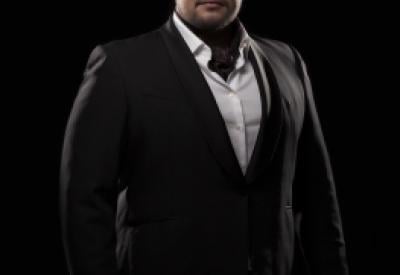 Three Tenors! - The Next Generation