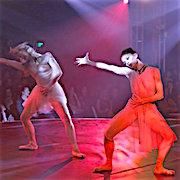 Transcending the Classical Mold With FURY

Conversations about the contemporary relevance of classical music often elicit hand-wringing. But multimedia productions like filmmaker Kate Duhamel’s FURY go beyond that sort of discussion, focusing on something larger instead. Duhamel’s work, playing Feb. 1-2 at August Hall, embraces classic music’s rigorous structures and traditions — then brazenly flings them into palpable, pliant fusions with indie pop.

Last fall, the show’s Midway Theater venue configured a stage and runway ramp with audience in-the-round and space for rock concert-like standing. The 10 musicians in the string quartet and band were situated in shadow and distanced, separated by the long ramp from the dancers’ main playing space. Now, one week prior to the opening of the updated production at the August Theater, in an interview primarily about the score and musicians, composer Dutton says the team is still “fiddling” with the stage configurations.

“We’ll be more lit, with more dynamic use of light on the musicians. The quartet is either going to be centered between the keyboard and the band, with dancers coming between us, or we may have the quartet on one side, the band on the other. The ideal situation was having the quartet and band split down the middle so the dancers could shoot straight out,” says Dutton.

That approach included placing the quartet on risers, with the band surrounding them. Dutton decided that, while interesting visually, the split would compromise the quartet’s need to cue each other for musical gestures. Sections in which the quartet previously played alone but which are now more integrated with the band mean the final decision will serve whatever retains greatest energy between the musicians, she suggests.

All in all, the slightly smaller space emphasizes an acoustic and visual atmosphere simultaneously immersive and reflective. “What’s cool about FURY is that it feels like a larger-than-life narrative, but it also feels intimate and introspective. The dancers and musicians are up-close, but there’s a distance because they’re still onstage, not wandering around amid the audience,” says Dutton.

The surreal, dystopian story told through dance — of characters battling to secure scarce fuel, water, and technological scraps essential for survival after a nuclear apocalypse — requires Dutton’s score (created in collaboration with YASSOU’s James Jackson and Lilie Hoy) to stretch immeasurably. While remaining within five clicks of the metronomic markings, occasional rubato allows tempo changes, but the greater variance is in the work’s overall framing. “I had in my mind originally that I had to match the string composition with the band,” says Dutton.

Although it remained important that the piece retain the purity of classical music inserted into what Dutton calls “YASSOU’s out-of-the-blue, pop style,” she questioned whether the strings should sound like a pop film’s soundtrack or something more like a contemporary classical string quartet. “In the end, I went rather to the middle: it’s atmospheric and melodic, with movements that are about rhythm and gesture. It’s a rock ballet with strong, compelling rhythmic aspects. The main thing [in a tender, ‘green light’ section] was to get the dancers to move in gentler, alone-together movements and then express the loss when they realize togetherness doesn’t exist. When they battle to get that back: it’s the most emotional part of the story.”

Asked about the legacy of classical music composers and an art form considered in its time to be complete, Dutton defers judgement. “I love classical music and many other kinds of music. But I recognize it’s harder to appreciate and stay with classical music if you haven’t had the training or exposure to it. It doesn’t have that primal, heart-pounding beat of rock, so it requires a different type of listening. On its own, pop music’s short form and repetition makes it feel disposable, quickly dated. I marry my classical composing with more accessible forms. It would be wonderful if these could augment each other, exist independently but side-by-side. The timelessness of classical music paired with indie pop makes both feel refreshed.”

A refreshing look at the timeless story of Odysseus.

Fantastic Negrito Takes the Stage in Berkeley With Taj Mahal

The Grammy-winning Negrito is a musical chameleon who defies easy classification.