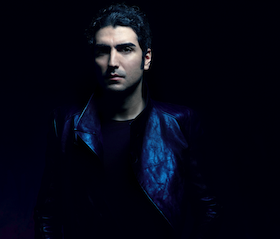 “If I were a real Sufi,” says Hafez Nazeri, “I would have been detached from all the needs and material things in this world. And I know I am not able to do that.”

Instead, he’s on the phone from his adopted home in New York City, to which he emigrated in 2000. He’d abandoned the “rock star” status he’d achieved in his native Iran, as the son of iconic vocalist Shahram Nazeri and as a singer and virtuoso on the setar, a lute in use by Persians before the advent of Islam. Now Nazeri father-and-son are on tour behind Hafez’ sui generis Sony Classical release, Rumi Symphony Project – Cycle I: Untold, which they’ll showcase at San José’s Flint Center on March 23.

The recording, which in addition to the Nazeris features a large choir, the Marin-based Indian percussionist Zakir Hussain, and a handful of American classical and jazz soloists including cellist Matt Haimovitz, is named for the preeminent 13th-century poet of the Sufi sect of Islam, Jalāl ad-Dīn Muhammad Rumi, who lived in what was then called Persia and composed his thrilling devotional verse while dancing to music. Hafez Nazeri, having refused requests to continue performing Persian classical music after his emigration, enrolled at the Mannes College of The New School, on the Upper West Side of Manhattan, and began study of the very different canon of Western classical music, with the goal of properly commemorating the 800th anniversary of Rumi’s birth, in 2007.

But “those people had a hard time with me,” Nazeri says of the Mannes faculty, “because they needed to start me from scratch. I was nearly 20, and they had 13-year-olds who could write symphonies, where I didn’t know how to write a single line. I was great at what I was doing before I came to Mannes, but for me to start playing scales on the piano, it was very painful. But it was the best gift I ever got in my life.

“And being in New York added to that gift. I was at [New York] Philharmonic rehearsals every time the school would provide us a ticket. I was going to all the conferences and all the concerts every night at school, studying opera, and doing composition,” Nazeri continues. “And I wanted to learn conducting.” All of this helped him evolve what he launched as the Rumi Project in 2001, whose mission, aside from the octocentennial, was to celebrate Rumi’s unifying spirit, reflected in a quote from the poet in Untold’s liner notes: “We dance behind veils. Muslim, Christian, Jew are the masks we wear. In truth, we are not here. This is our shadow dance.”

Universality aside, Nazeri’s challenges at Mannes forced the recognition that different cultures had been dancing, and making music, in different manners. “In Persian scales, we have quarter-tones that don’t exist in Western classical music,” Nazeri points out. “And very complex rhythms, with accents which [Western] players are not used to…. In the music that I come from, you are judged by the great way that you do improvisation, in comparison to [Western] music, where you’re judged by how good you read the score and how good you write music. Completely different worlds!”

“In the music that I come from, you are judged by the great way that you do improvisation.” Aside from the forms of traditional instruments — which have included, aside from the setar, the santur (similar to a dulcimer), ney (end-blown flute), kahamcheh (spike fiddle), and tombak (goblet drum) — Persian classical music also maintains a classification in a set series of pieces called radif made up of short melodic phrases called gusheh, which are in turn classified into systems called dastgah, historically related to Indian ragas. “Persian and Indian music have the roots of seven or eight thousand years of history, so they truly represent human existence, in my opinion,” says Nazeri. In his own life, “I had grown up in a house that was the place of all the greatest masters, so since the time I was in my mom’s belly, I was hearing these sounds every single day. There are recordings of me at the age of 3, doing some of the most difficult Persian repertoire, and by the age of 5, I was teaching my father’s advanced students how to sing, believe it or not.”

Nazeri's father was a pioneer at incorporating Rumi’s poetry into Persian classical music — “and there are a lot of people still criticizing him for those changes” — so it’s no surprise that his son has included in his recording a couple of those poems, intoned passionately by Shahram Nazeri in the original Farsi language. The other elements of Untold — which is only one cycle in the ongoing Rumi Symphony Project — realize the mission that transplanted its composer. “Western music should learn from the freedom and passion and the soul of Eastern music, the journey to reach God, to find the real truth,” Hafez Nazeri declares. “And I think the East can learn about the sophistication and beauty of the harmony and the orchestration of Western classical. I wanted to take musical elements from East and West and integrate them, so they become one, and united.”

Nazeri feels this process may contribute to other means of redefining and revitalizing Western classical music. There could be an even more profound effect of Nazeri’s amalgamation on the state of music-making in his homeland. “I’ll be very [curious] to see how Persian people are going to react to Untold, because it takes Persian classical music 500 years ahead,” he says, with aspiration, not immodesty. “If you look at [Persian] music in the most advanced way, it sounds very close to 14th- or 15th-century Western classical music,” more commonly termed early music. “So I’ve taken it and retransformed it and brought it into the 20th and 21st centuries, by incorporating dissonant harmonies, chromaticism, a very modern extended technique of orchestration, weird modulations, and things which do not exist in Persian music.”

“I had grown up in a house that was the place of all the greatest masters, so since the time I was in my mom’s belly, I was hearing these sounds every single day. There are recordings of me at the age of 3, doing some of the most difficult Persian repertoire.”

The resulting cross-cultural hybrid is attractively exotic. “It’s as if an Iranian man marries an American woman,” says Nazeri. “Their children are not anymore Iranian or American, they’re new creatures, and you have to name them something.” Has he come up with anything that could be used at a christening? “I need the critics to come up with something universal!” he says with a laugh.

Whatever you call it, it’s attracting attention. “In 2007, I premiered the Project in L.A., at Disney Hall, with the Los Angeles Philharmonic, and it was sold out much in advance,” even without any recorded manifestation. “One piece from Untold — ‘Chapter IV: Eternal Return’ — was born at that time. Then I had a concert at Carnegie Hall in 2009, where I premiered the real Rumi Symphony Project, and this is where Sony people came to my show, really liked the Project, and wanted to release Untold. They wanted to record the same program I did at Carnegie. But when I stepped inside the studio, all these new pieces started to come to me — much more advanced, much more complex. And this is why this recording took 5,000 hours to finish. It was endless! People thought I was crazy, the way we had to postpone release dates and things.”

The craziness had to be infectious, involving as it did innovations unfamiliar even to the composer, who also served as coproducer, singer on those solo vocal parts not covered by his father, and soloist on his own iteration of the setar. Fabricated by Iranian luthiers with two extra strings and greater range, allowing for harmonic deployment of the instrument outside its traditional monophonic mode, the new instrument was dubbed the hafez, named, like its player, for another Persian poet, some hundred years Rumi’s junior.

“Western music should learn from the freedom and passion and the soul of Eastern music, the journey to reach God, to find the real truth.”

“There was a war going on” at times, Nazeri says, involving the musical and cultural challenges to the American musicians participating in performing and recording his music. But in a promotional video soon to be available via YouTube and social media, “everyone says they were learning every day from the process, and that we could see it was getting better, so we could not stop.”

Nazeri has special praise for his coproducer, David Frost, who just two months ago won a Grammy as Classical Producer of the Year. In the promotional video, Frost “said working with me was very challenging, because he was examining every aspect of the performances and the music. But he was also there with me emotionally, to create a balance between the musicians and me. He’s one of the most beautiful-hearted humans I ever met in my life.”

The resulting CD, which provides the program for the Project’s current tour, involves a cosmological journey set forth in the liner notes, from the Big Bang through the Milky Way to Earth, with the development of life forms and humankind’s spiritual evolution, toward enlightenment and beyond to “a new Big Bang illuminating a new horizon and a new life that is as yet … Untold.”

Nazeri points out that there’s much to explore for both performers and listeners. “On track #2 [for example], you have nearly 85 singers singing this huge cluster that is nearly three octaves [wide], with chromatic dissonance. And you have my vocal, improvising; I start in major [mode] and go to minor, but it matches so well. On track #3, my father is the solo voice. From tracks #4 to #10, you hear the voice as a flute. The technique, called tahrir [a sort of yodel], is the most essential part of Persian music, at least four or five thousand years old. But I’ve made it rhythmical, to create a sort of instrument sound.” Matt Haimovitz’ and Johannes Moser’s cellos and Paul Neubauer’s viola provide more familiar-sounding interludes of reflection.

On the first two stops of the tour, which started earlier this month, all 800 available copies of the Untold CD sold out quickly. Nazeri suspects that “Someone like me, who always battles like a soldier, is not going to have a very long life” (he’s 33, his father 62), yet he aspires toward a homecoming, accompanied by his new American musician friends, this summer, after 14 years’ absence. “There’s a lot of hope with the new government. One of their policies is to create dialogue with the West,” Nazeri observes. “So if the government allows, I want to bring these stars with me to Iran and have a little festival, with master classes and things for the younger generation, so they can get to know what’s going on in the West. I feel maybe this is the right time. And it’s to the government’s benefit, really, more than it is to my benefit. They won’t be able to create silence in the younger generation.”