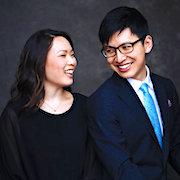 Chamber music should be all about intimacy, right?

So it seems fitting that the concept of the delightfully user-friendly Piedmont Chamber Music Festival, celebrating this week its fourth-annual installation at the hundred-seat Piedmont Center for the Arts, should have been born in the bedroom of married chamber music violinist Wayne Lee and pianist Juliana Han.

“It was in Chicago, in January of 2016, where my string quartet, the Formosa Quartet, was meeting,” recalls Lee, over lunch with his wife and a journalist. “We had just come from Piedmont, where Juliana met my parents for the first time. I’d taken her around town, and pointed out the Center, which was a relatively new multipurpose arts facility with really good sound and size …”

“… and a beautiful piano, a Steinway L,” says Han, tagging on her mate’s phrase, as they both do, in chamber fashion. “The piano had been totally rebuilt by John Callahan, whose gorgeous space is over in Alameda, and it had this gorgeous, warm sound, and the space suited it well. And the piano’s owner was Gray Cathrall, who’s the editor of the Piedmont Post, and he put it in the Center so that everyone there can use it.”

“So in Chicago,” says Lee, returning to his story, “I remember lying in bed and saying that Piedmont would be a great place for a festival. I probably bolted straight up in bed! Because it was a chance for Juliana and I to play together in a more formal setting, it was an excuse to be in Piedmont and the Bay Area for more than just visiting parents and friends, and it was a chance to give back to my community.”

Lee had actually spent the first years of his life in San Francisco and Daly City, until his parents, immigrants from the Guangzhou area in southern China, had decided to relocate on the other side of the Bay, in Piedmont. “It was probably the schools there,” he says. “I’d had piano lessons and violin lessons, but no public-school music program until we moved to Piedmont.” He joined the orchestra at his new school, and went on to become the youngest member of the San Francisco Symphony Youth Orchestra, and then got accepted at Juilliard, several years before Han, who’d taken a different route to get there.

Han had been raised in Cincinnati by parents of Taiwanese heritage, attending a magnet arts school. She excelled as a solo pianist, but was stressed by too many competitions on the road, and she entered Harvard with hopes of being “a normal person.” There, she studied biochemistry, “because I wanted to figure out how the world works,” and went on to grad school in law. Despite those academic demands, she also performed in the Harvard-Radcliffe Orchestra, and signed up for chamber-music coaching, “which was pretty much a guaranteed ‘A,’ so I took it seven times.”

After securing her doctorate in law, Han landed a high-stakes job in corporate law in New York City, and went on to advise Mayor Michael Bloomberg. “I worked 360 days of the year and had five days off when my parents came to see me. During those five days, I signed up for piano camp at the Mannes School, and I made the last day of my vacation an audition day at Juilliard.” She’d chosen to apply to the collaborative piano program, which required her to audition with a violinist, and she selected the name of a man she’d encountered in chamber music circles: Wayne Lee, who’d joined the Formosa Quartet in that same year, 2012.

A few weeks later, Han was accepted by Juilliard, much to the consternation of her law-office colleagues. Three years later, she was urged by a roommate to attend Lee’s birthday party, and, by his report, “something clicked.” The two stayed in constant contact, even when he was visiting relatives in Taiwan and she, in connection with her Juilliard program, was studying German, for vocal diction, in Berlin.

The Piedmont Festival seemed an extension of the couple’s romance. “From what Wayne told me, and from what I saw for myself later on, music education was more of a priority in Piedmont than at many other places,” Han points out. “The community was more supportive of the arts, and people seemed to know each other, they seemed like the right audience.”

“The basic framework of the Festival has been the same since the beginning,” says Lee, “which is, bring in really great musicians from all over the country for three featured concerts.” "If you look at the best chamber musicians in the country, we know who they are,” adds Han. “They’re generally thrilled to be there in Piedmont, where they stay in Piedmont homes and have meals brought in by Piedmont residents.”

Aside from the members of the Formosa Quartet, “many of the participating musicians we knew before,” says Lee. “I met [violist] Nick Cords while playing with The Knights, in Brooklyn.” “We’re bringing not just the best people, but people who are perfect for that program,” notes Han. “They have to be versatile enough to play on every concert.”

The categories assigned to the three concerts — Classical, on July 24, Not Classical, on July 26, and Pop, on July 28 — are not meant to be taken too seriously. “On the first program, we do have a Mozart piece, but we also have a neoclassical piece by Poulenc, and a piece by [Iranian composer] Behzad Ranjbaran, which is Persian classical. On the second program, the first piece is by Lei Liang, who’s Chinese-American, and it’s a string quartet inspired by Mongolian folk music. There’s Joaquin Turina, who’s Spanish and less classical; Orlando Gibbons, who’s early 17th century — preclassical — and Brahms, who’s classical/romantic. Then there’s Pop, for which [cellist] Clancy Newman has created incredible caprices where he takes hits off the Billboard charts, like ‘Uptown Funk’ [a 2015 hit for Bruno Mars and Mark Ronson], and transcribes them for solo cello. We don’t even know what he’s playing yet. Zach DePue, who used to be in the Philadelphia Orchestra, plays a lot of bluegrass fiddle, and he’ll do a solo violin set. We’re breaking down people’s preconceptions, maybe, by giving these concerts provocative titles.”

“I wonder if other festivals have more of a passive mission,” Han proposes. “We hope people will start thinking about, oh, I’ve never considered what ‘classical concert’ means. And what about non-Western music? We’re a starting point for further exploration, hopefully a more active way of presenting music.” Furthering that distinctive mission, the presenting musicians introduce each piece, and remain at the venue after the concerts, to interact with the audience more completely and informally.

Greater participation of the local community in planning and promoting the Festival has become vital to Han and Lee, who now live in Iowa, nearby her teaching job at Augustana College and his at the University of Illinois. “It’s the opposite of New York,” chuckles Han. “This past year, I was traveling about half the time,” adds Lee, “so when I’m not traveling, it’s great to come back to a quiet place.” In January, Lee’s Formosa Quartet released a folk-music-based album, From Hungary to Taiwan, on Bridge Records, which will be on sale at the Festival.

Next to their home life, the Piedmont Festival provides the couple with the closest professional approximation of quality time. “Crafting a performance together is a whole different level,” says Han. “It’s a shared intensive experience that gets deeper into everybody’s personality and beliefs.”

“And when we make it work,” sighs Lee, “it’s like nothing else.”

The acclaimed violinist shares how she lives with music, rather than trying to conquer it.

Valley of the Moon Music Festival focuses on the influential women who commissioned and promoted composers, from their homes.