What Are We Masking With the Word “Gentrification”?

Composer Ted Hearne started thinking about gentrification — and his role in it— when he was living in Fort Greene, Brooklyn. In the time he was there, from 2000 to 2005, the neighborhood changed dramatically. One bar that he and his friends would go to is still there, he says, but all the other businesses on that block are gone. Hearne lived in a small two-bedroom garden apartment in a building owned by a Black woman. When he first moved there, all the other tenants in his building were Black, but by the time he left New York, they were all white.

Before moving out, Hearne read an article that reported that the neighborhood had the biggest disparity of wealth in the state and his own experience confirmed that.

“Some very wealthy people moved in. Holly Hunter bought a house on my block. Björk bought a brownstone on the next street,” he said. “Working with Saul, we discussed how when we talk about gentrification there are a lot of things underneath that word. There are societal and global trends, and it’s kind of a buzzword that means different things, but there are deeper issues of displacement.”

Saul is poet and musician Saul Williams who worked with Hearne on the oratorio Place, being performed at Cal Performances on March 12. Place premiered in 2018 at Brooklyn Academy of Music (BAM), produced by Beth Morrison Projects, and was a finalist for the 2021 Pulitzer Prize along with receiving two 2021 Grammy nominations. The piece is a dialogue, with Hearne writing the first part of the libretto, Williams responding in the second part, and Hearne composing the music.

In 2020, the oratorio was released on video, but the March 12 presentation will be the first performance of Place with a live audience since the start of the COVID-19 pandemic. Opera News called it, “exquisite, a work of genius” and went on to say, “For reasons both musical and thematic, this piece should be listened to closely.”

Hearne started the oratorio thinking of his personal map of Fort Greene, and the places he went that were important to him there. It quickly became bigger than that, with Hearne wanting to go deeper into his own role in gentrification.

Hearne has not been shy about addressing political topics in his compositions, with previous work including Sound From the Bench, a cantata about corporate personhood inspired by Supreme Court oral arguments, and The Source, whose libretto is taken from Iraq and Afghanistan war logs. In Place, Hearne explores how he benefits from oppressive structures.

“Growing up as a white man of my generation, I wasn’t taught really to consider my identity very much, and I was taught that my perspective was the neutral one,” said Hearne, who was born in 1982. “I have a son and I have a father, and what are the things I may or may not be passing down to my kid? The first thing Saul wrote as a response was “What About my Son?” over and over again, and I thought that was so powerful. He also wrote a poem back called “Is it OK?” that kind of spoke to the over-consideration of one’s perspective.”

Isabel Wilkerson’s The Warmth of Other Suns: The Epic Story of America’s Great Migration, individual stories of some of the millions of Black citizens who moved from the South to northern and western cities over decades, along with Robert Caro’s 1974 tome, the Pulitzer-Prize winning The Power Broker: Robert Moses and the Fall of New York about the urban planner who designed and implemented scores of highways and bridges, often at a huge cost to the community, influenced how Williams thinks about migration and displacement. He said gentrification may be a relatively new word but pushing communities out has been happening for centuries.

“Of course, there’s tons of redlining and all the systemic practices and what schools are funded and not funded and the loss of small business loans,” Williams said. “There are so many things, but this is not new information. What is new is people who are suddenly willing to pay attention to it.”

Williams said he’s been thinking about who was pushed off the land to build the concert halls they’re performing the piece in, such as BAM and UC Berkeley, and about how people have been displaced for years.

“People want to relegate this to being a modern conversation, but the real question isn’t why has this changed, but why hasn’t this changed,” he said.  “We see this huge migration happening in Ukraine and refugees from Central America and Haiti are entering the United States. I’m in Miami now, and I read this morning that 30,000 people from New York, New Jersey, and Connecticut have registered with the Florida DMV. That’s migration too, and rents are rising as a result of all these Northeasterners moving here.”

Artist Sanford Biggers did the set design and Williams says he wants the piece not to be like a “bland smoothie,” but jarring, and like one of the quilts Biggers is known for.

“I’m really interested in music being made as a patchwork,” Hearne said. “The piece deals with different sounds and artifacts and samples. With Sanford Biggers’s quilts the edges are visible, and the materials are clashing. There are layers in the pieces and they’re adjacent to each other and there are different dimensions, and you hear the edges — it’s not about creating a perfectly cohesive whole.”

Williams, who recently directed a musical science fiction film, Neptune Frost, that premiered at the Cannes Film Festival last year, enjoys how working with others pushes him and opens into new relationships. This collaboration, for example, led him to ask Hearne to do additional scoring for his film.

“The thing about collaborating with masters in their own field is it heightens your relationship to your own craft,” he said. “It brings out qualities and trains you to see.” 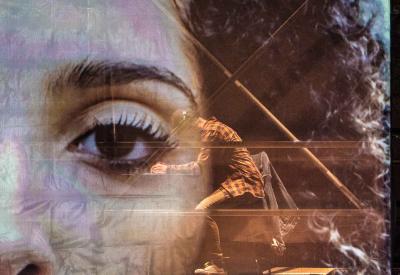 Filled with music and ideas from outside the concert hall, Ted Hearne's new work opens doors, but it was not the only fresh performance at Davies this past week.

A new CD offers a glimpse of the composer’s much-postponed multimedia collaboration with poet Saul Williams on issues of gentrification.

From Piano Trios to Protest Music, Conrad Tao Does It All

Percussion Strikes a Balance Between Human and Machine