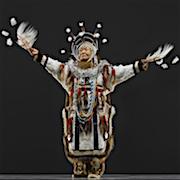 You Can Get Anything You Want at the Ethnic Dance Festival

If someone says the San Francisco Ethnic Dance Festival is unbelievable, believe it.

Celebrating its 40th anniversary in July, the bountiful two-weekend event at War Memorial Opera House displays the Bay Area’s world dance and music scene. On a broader scale, the festival upholds community, diversity, while broadcasting acceptance and celebration of ethnic and cultural variety.

As Artistic Directors Emeritus Carlos Carvajal and CK Ladzekpo step aside after 12 years at the helm, three new directors step up to steer the festival into the future. Patrick Makuakāne is founder, artistic director, and Kumu Hula (master teacher of hula) of San Francisco’s renowned Nā Lei Hulu i ka Wēkiu Hawaiian dance company. Latanya d. Tigner is a dancer and choreographer at Oakland’s Dimensions Dance Theater, directs Dimensions’ youth company, and is a lecturer on the dance faculty at UC Berkeley. Māhealani Uchiyama is founder and artistic director of the Center for International Dance in Berkeley, Kumu Hula of Hālau Ka Ua Tuahine, and an award-winning choreographer and composer. (New artistic co-director bios may be found here.

In an interview conducted via email, Tigner offers insights on festival history, perspectives on its evolution, and a forecast hinting at directions they hope to travel as the new directors preserve and expand the festival’s mission to bring Bay Area and global dance to more communities.

The Memorial Opera House is spectacular. Other than high visibility, what does the location and venue add to the experience visitors have at the festival?

Due to the uncertainty of the future of the Palace of Fine Arts, the festival’s longtime performance home, EDF has bounced around the city in the last couple of years. YBCA’s state-of-the-art theater proved a great location, mainly because of its proximity to BART, but the house was too small. Last year when I first heard the festival would take place at the 3,000 seat War Memorial Opera House, I said to myself, “Why not!? A festival presenting cultural practitioners of the highest caliber deserves to take place in this city-owned, world renowned, cultural facility.” The presentation of the festival in this venue lifted the notion that only the ballet, opera, and big touring companies deserved to perform there.

This is the festival’s 40th anniversary Entering the next decade, will there be a continuation of traditions? Will there be innovations, expansions, or changes in format?

We will definitely stay true to the tradition of presenting a festival as ethnically diverse as possible of artists/practitioners of the highest caliber; we will continue to honor their cultural traditions and artistic visions through the technical production of their work. I may not be at liberty to speak to the festival’s expansions, but I will say Mahea, Patrick, and I are committed to building lasting relationships with ethnic communities not currently represented at the festival, re-establishing relationships with past communities and artists who for some reason have not auditioned in a few years and seeking out practitioners/artists creating contemporary iterations of traditional forms such as soukous, son, salsa, and Afro-pop for example.

In your work with youth at Dimensions and at UC Berkeley, are you seeing new directions taken by young choreographers, perhaps more cross-genre collaborations or works with more/less political content? Is there a retro movement that returns to indigenous or ancestral dance forms?

Dimensions’ youth (ages 8–18) definitely create work charged with social and political commentary. Because they’re training with Dimensions, they draw from Guinea, Haitian, Congolese, Dunham technique, ballet, jazz, modern, hip hop, house, dance hall, tap, spoken word, and more to realize their vision. As for the students at Berkeley, they primarily train in modern and contemporary dance because that’s the dance program’s focus. I recently created a class, African Dance Presence in Hip Hop, which focuses on specific West, Central, and South African dances/steps that appear throughout the African Diaspora.

I will say there are artists such as Byb Chanel who are restoring and reenvisioning lost African ritual practices. Dohee Lee, a Korean born artist, looks to the past and the contemporary to revision Korean rituals accessible to all who attend her performance rituals or ritual performances.

What are the festival features you’d most like to highlight?

The coming together of communities to witness the similarities of their traditions makes me smile. The “ah ha” moments of these realizations spark deep conversations around cultural practices. Some even lead to collaboration, such as Dimensions Dance Theater and Lily Cai Chinese Dance Company’s Common Ground (1992), which Deborah and Lily created in response to the riots in Los Angeles sparked by the infamous Rodney King verdict.

I love, love, love the multigenerational offerings. Some of the young performers (meaning 16 and under) have brought the house down with their artistry. This year we have 10-year-old soloist Ananya performing on the second weekend. When I say powerhouse, I mean powerhouse. I can’t wait to see her in the Opera House. Seeing these young folks perform at this level of understanding, demonstrates a passing down of tradition and culture. I hope this entails history, ritual practice, cultural context and not just technical training for performance. That’s cool, but traditional practices and culture can get lost when we transform dance practices/rituals into entertainment pieces for the Western gaze.

Can you speak to the support the artistic directors have received and how the community-at-large might help to continue or make more substantial your efforts to bring ethnic dance to more audiences.

The entire staff has been beyond supportive of our transition into these roles. As for the community, I welcome suggestions and introductions to different ethnic communities interested in sharing their dance traditions with others. I’m also interested in (holding) conversations that will bring the festival to communities o