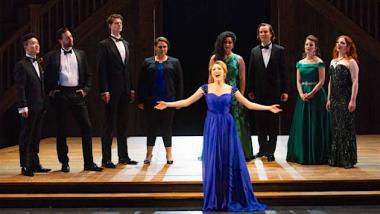 The rare joy of witnessing young talent in full flight was multiplied last night in the War Memorial ... 29 times. That’s the number of artists participating in the correctly named Grand Finale at the conclusion of the 2018 Merola Opera Program.

Twenty-three singers from around the world, five apprentice coaches, and apprentice stage director Marcus Shields, who was responsible for the show’s staging, produced a spectacular evening at the end of two-and-a-half months of training, coaching, master classes, rehearsals, and public performances.

They now go forth “into the world,” in the footsteps of former Merolini such as Susan Graham, Thomas Hampson, Mark Delavan, Bryan Hymel, Joyce DiDonato, Patricia Racette, hundreds of other alumni of the program’s 61 years.

On the big open set of San Francisco Opera’s upcoming Roberto Devereux, Shields met the ever-daunting challenge of connecting unrelated opera scenes by having the Merolini provide a supportive, unobtrusive background to those in the spotlight.

Below the stage, the S.F. Opera Orchestra, conducted by Nashville Opera’s Dean Williamson, shifted smoothly from one genre of music to another, doing equal justice to Rossini (after a somewhat labored start, at the orchestra’s return from summer vacation), Donizetti, Richard Strauss, and an especially poignant Bernstein — accompanying Alexandra Urquiola’s haunting rendition of “I was standing in a garden” from Trouble in Tahiti.

Several performances during the three-hour-long evening brought to mind a current movie in the news as the large audience responded enthusiastically to splendid singing by “Crazy Great Asians.”

Among singers from South Korea, the first to score big was tenor WooYoung Yoon, with eight pure and glorious high C’s in Tonio’s aria “Ah, mes amis!” from The Daughter of the Regiment. Unlike famous performers of this knotty aria — which brought Luciano Pavarotti to the world’s attention — Yoon didn’t rush into the climaxing ninth C. He paused, took a big breath with a sigh — bringing friendly laughter from the audience — and then hit the rafters and held the note right into the inevitable ovation.

Baritone Jaeman Yoon, also from Seoul, sang a sonorous Rigoletto in the “Tutte le feste al tempio” duet with Meigui Zhang, as the soprano from Chengdu brought to vocal and dramatic light a Gilda both devastated and resolute in her misguided love.

At the beginning of the evening, the L’Italiana in Algeri overture was followed by a duet from Mascagni’s L’amico Fritz, with Brian Michael Moore in the title role, suffering from terminal ennui, while Megan Grey’s Beppe did everything possible to cheer him up. Patricia Westley demonstrated exemplary bel canto in “Care compagne ... Come per me sereno” from Bellini’s La Sonnambula.

Most of the evening demonstrated the effectiveness of Merola’s diction training, but Addison Marlor’s Czech in an aria from Smetana’s The Bartered Bride was of special merit.

Williamson’s orchestra did especially well accompanying Brittany Nickell with a gorgeously sung Magda in a La Rondine scene. The soprano then switched instantly to a completely different musical-dramatic role, partnering Christopher Oglesby splendidly in a duet from Richard Strauss’s Capriccio. Anne Maguire did herself proud with an aria from Cilea’s Adriana Lecouvreur — with Brooks providing support this time on the celeste.

Similar high spirits were at play as Jacob Scharfman’s Malatesta plotted with Cheyanne Coss’s Norina against Don Pasquale of the Donizetti opera.

Puccini’s La Rondine got special attention at the concert, with two buoyant excerpts that included the entire class of 2018, which by now is on its way toward conquests on other stages ... except for the few who will be selected for SFO’s Adler Fellowship. That list will be announced soon.

Merolini Have a Ball With La Cenerentola