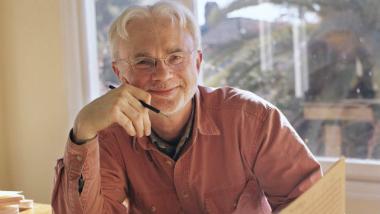 The first thing John Adams did when he came on stage at Disney Hall Sunday to conduct his Naive and Sentimental Music was tell the audience to ignore his program notes, to forget his 20-year-old musings about German philosophy and Friedrich Schiller’s concept of the “naive” (intuitive) artist versus the “sentimental” (cerebral) artist.

Looking back on the 20 years (almost to the day) since the Los Angeles Philharmonic premiered Naive and Sentimental Music (which Adams dedicated to the Phil’s music director, Esa-Pekka Salonen), he said he sees the work in very different, distinctly Californian light.

“It’s a symphony, a symphony in three landscapes,” said the former New Englander who arrived in the Bay Area in 1968. The changing, liberating nature of the time, and the natural splendor of California had a transformative effect on Adams and his music. It formed the inspiration behind his masterwork, Naive and Sentimental Music and later his LA Phil commission, The Dharma at Big Sur, which he created to celebrate the opening of Disney Hall.

Adams describes the opening movement of Naive and Sentimental Music in terms of a simple melody strummed for flute and a strummed guitar that enters like a song by Joni Mitchell — an innocent Little Dorritt of a melody that then ventures out into the world where it has the Dickens beaten out of it, but triumphs in the end.

The second, and most eloquently beautiful movement, Adams said, is his attempt to create an orchestral moment of “perfect stillness,” the type of Bay Area experience you might encounter during a visit to Muir Woods when the fog settles in and droplets fall from the branches of giant redwoods. Then, with a crafty smile, Adams explained how the final rondoesque movement, takes on a minimalist superstructure and gradually grows in orchestral intensity until, in Adams words, “it takes the roof off.”

The performance of Naive and Sentimental Music that followed  achieved exactly the effects Adams described. Schiller’s head-trip fell away and the three symphonic California landscapes shown through.

If one were given a crystal ball and could experience a performance of Julia Wolfe’s Flower Power 20 years from now, I wonder if she, like Adams, might tell her audience to chuck all the historical trappings referred to in the program and just let the music work on its own terms. Because there is without question musical significance in her creation.

But this weekend, as the work (also an LA Phil commission) had its world premiere, the performance not only bore the weight of Wolfe’s socially charged title (which those of us to whom it was applied, hated), it also included a distracting lightshow (designed by Jeff Sugg) that interspersed psychedelic mandalas with photos of antiwar/civil-rights demonstrations and images of hippies frolicking in Golden Gate Park. These visuals attracted undue attention and made statements that weren’t necessarily in the music. Wolfe tied down the interpretation of her own piece, when it might be better for audiences to confront it on its own terms.

The music certainly had eloquent advocates in the musicians of the LA Phil plus five members of New York’s Bang on a Can All-Stars: Robert Black (bass), Vicky Chow (piano/keyboards), David Cossin (drums and percussion), Ken Thomas (clarinets), and Mark Stewart (electric and acoustic guitar) who, with his long mane of white hair and bright hippy vest, could have once been lead guitar for Big Brother and the Holding Company.

During its 30-plus minutes, Wolfe’s piece meandered through a series of orchestral altered states that began with an overly long development section. At first it sounded like a slurred chant of “Om” in the low strings. But over time it morphed into the whirr of helicopter blades and then an incessant siren wail..

It all built to a confrontation between flower power and military power as marchers placed flowers in gun barrels and protestors mobbed the Capitol Mall. “Right On!” “Power to the People!” (the title of an upcoming LA Phil festival).

In the end, love triumphed, at least in Disney Hall, as a rain of multicolored paper flowers filtered down from the rafters. It was totally groovy.

Wolfe’s piece figures prominently in a mélange of a concert.

Macro to Micro: Wagner to Webern With the LA Phil and Zubin Mehta

The LA Phil’s former music director puts the 12-tone system in context for those willing to listen and learn.

I Still Dance is the latest work Adams has written for the orchestra.