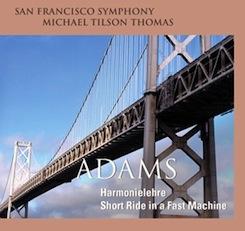 Adams, to the Max

The San Francisco Symphony’s new recording of John Adams’ Harmonielehre makes me wonder why the composer was ever described as a minimalist.

If the slow changing of things over a long stretch of chattering strings is a product of the 1970s, why does so much of the piece sound like late Sibelius, with added piccolo frills and percussion sparkles? There is always something new happening in Harmonielehre, and it’s about as far from the Philip Glass zone-out-music mode as one can get without losing the idea of a steady rhythmic pulse.

James M. Keller’s liner notes begin: “When musicians see the title Harmonielehre, their minds leap to the daunting treatise written by Arnold Schoenberg in 1910–11 and dedicated to the memory of Gustav Mahler.” You know, I doubt that very much. Schoenberg’s Harmonielehre is just a harmony textbook — a pretty good one, as I recall it, but not “daunting,” and not related at all to the serial technique that Schoenberg devised a decade or so after he wrote the book. And if one musician in a hundred has heard of the book, let alone clapped eyes on a copy of it, I’d be surprised.

Anyway, Harmonielehre the piece is a whole different subject, and a much more enticing one. To embark on the first movement is actually to take a trip to who-knows-where. And I say “embark” on purpose; the chugging accompaniment really does suggest a train journey. The entire long movement is nearly all constantly changing scenery, broken only by a middle section where the train appears not to be moving, and the Sibelian strain is no longer the first movement of the Fifth Symphony but something out of the Second.

The performance, from December 2010, is extraordinary in its control of the long arcs in all three movements.

The second movement, called “The Anfortas Wound,” is the healthiest meditation on infirmity I’ve ever heard. As it must be: You can’t portray sickness artistically when you’re suffering from it. Here the long unison string lines are more Shostakovich than Sibelius; so is some of the percussion. But the keening trumpet solos come from neither.

The finale, sparkling with piccolo and violin harmonics and high-pitched percussion, works its way around to the same sort of ostinato wave that drove the first movement to its conclusion — something like the Sibelius Fifth Symphony again (down to the key, even), but with added woodblock and piccolos.

The performance, from December 2010, is extraordinary in its control of the long arcs in all three movements. Everything happens organically; no sudden lurches occur, and the music simply comes on, wave after wave.

Short Ride in a Fast Machine — the piece dumped from Britain’s “Last Night of the Proms” event twice, because of short rides in fast machines that had recently killed Princess Di one year and then the victims of 9/11 in another — is a jolly, woodblock-driven joyride. It’s not the sort of scramble the title might suggest — the feeling of speed is all dynamics and pacing, not frenetic note-spinning. The S.F. Symphony’s performance, from September 2011, is marvelously jocund, and also marvelously tight.