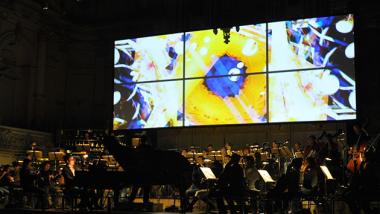 Most of what I know about Thomas Adès has come through the critical accolades that have surrounded him for the past two decades.

Born in 1971, he is a brilliant and vibrant pianist who was second in the piano class of the BBC's Young Musician of the Year competition in 1989. As a composer, he made his name at 24 with the controversial (for explicit sexual content) chamber opera Powder Her Face. His symphonic poem “Asyla” (1997) cemented his reputation and his works have received major awards and many performances. Nowadays, he travels the world as conductor of his own compositions. The San Francisco Symphony invited him to debut with a program of his choosing, including one of his own works.

The piece that Adès brought to San Francisco was In Seven Days (2008), a work for piano and orchestra with accompanying visuals projected on six video screens, based on the creation as it is described in the Book of Genesis. It was a collaborative project with Israeli filmmaker and video artist Tal Rosner (b. 1978) who was Adès’s life partner at the time.

In conjunction with his own composition, Adès selected other works that are inspired by stories of creation: Charles Ives’s The Unanswered Question, Milhaud’s La Création du monde, and Sibelius’s tone poem Luonnotar, featuring soprano Dawn Upshaw, which originates in the creation myth from Finnish folklore.

Seeing Adès at work makes it obvious that he was not invited for his qualities as a conductor. He is a thoroughly adequate time-keeper in his own piece, keeping the orchestra synchronized with the video projection, and I very much enjoyed his conducting of Milhaud’s jazzy ballet with the gorgeous alto sax solo, where the music more or less speaks for itself.

The same can be said for the wonderfully spatial concert opener, Ives’s Unanswered Question, with SFS trumpet Principal Mark Inouye solemnly positioned front and center, conductor Adès plus a woodwind quartet further back to the right, and the string section completely offstage, led by assistant conductor Christian Baldini.

But there is really no point in inviting Adès for more Sibelius. His conducting is simply a few levels of depth and refinement short of what is necessary to deliver the score convincingly. Under Adès’s baton, even Dawn Upshaw’s vocal greatness couldn’t lift the level enough to make this a memorable rendition.

Under Adès’ baton, even Dawn Upshaw’s vocal greatness couldn’t lift the level enough to make this a memorable rendition [of Luonnotar].The main reason for Adès’s presence on the S.F. Symphony stage, must therefore have been his work as a composer. Unfortunately, all I heard was one banal idea morphing into the next, vague references to symphonic rock or to movie soundtracks, endless, rippling motion up and down unimaginative scale progressions, pianist Kirill Gerstein clawing his way through a piano part full of Elton John quotes, and way too many reminiscences of everything I dislike about Philip Glass.

Rosner’s video imagery didn’t lift the spirits either; uninspired at best and drab at worst, its main gimmick was that every visual element is somehow derived from one of two architectural sources: the Royal Festival Hall in London and the Walt Disney Concert Hall in Los Angeles. The resulting video held the middle between the output of an ancient piece of music visualizer software and a screensaver.

It is perfectly possible that Adès's reputation has influenced my expectations too far, and I will certainly explore his music further. But that will be in spite of what I experienced on Saturday evening and not because of it.

And maybe the world and I will just have to disagree.