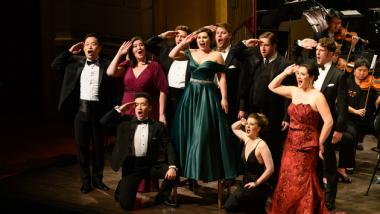 “The Future Is Now,” the annual Adler Fellows concert, always has an Oscar-night buzz. While there are no statues handed out, the highlight reel of arias and duets by the rising singers of San Francisco Opera’s prestigious training program carries a built-in air of anticipation. How captivating (or maybe not so) will the next number be? And the one after that? The 2019 edition at the Herbst Theatre on Dec. 6 featured 17 selections, preceded by Bernstein’s Candide Overture.

The concert induces a further form of handicapping. It’s irresistible to wonder which of these young artists, and it might be quite a few of them, are bound for stardom? The roster of Adler Fellows who have achieved major careers is a long and distinguished one.

And finally this year, there was an added enticement to look ahead. The day after being appointed as San Francisco Opera’s new music director, effective in 2021, Eun Sun Kim conducted the company’s orchestra. Right out of the gate, with a Candide opener that capered and galloped and sighed, sending off bright flashes of color throughout, Kim confirmed what those who had heard her work in the vibrant and coruscating Rusalka at the War Memorial Opera House last summer already knew: San Francisco Opera’s musical future is in excellent hands.

In past years, picking clear stand-outs in a field of strong Adler contenders has been a futile exercise. Once again, on Friday night, the singing was of a high order. Technical skills glittered in a repertoire that ranged from Handel to Tchaikovsky, Mozart to Massenet. Voices full of character and emotional amplitude rang out. Some considerable acting chops were in evidence, even under cramped conditions at the Herbst that afforded the singers scant room to maneuver on a stage occupied by a full orchestra. Confidence, style, and self-assurance were the order of the night.

It’s more than a little noteworthy, then, when a singer rises above an already lofty plane to makes a particularly striking impression. Two did this year.

In a pair of knockout arias, bass baritone Christian Pursell carved out richly drawn, lustrously sung musical portraits. Unfurling a voice of remarkable solidity and mobility from top to bottom, he closed out the first half of the program with the title character’s probing cavatina from Rachmaninoff’s Aleko. Pursell dug into the Russian lyrics and gave them a ripe, mournfully agitated cast. He returned after intermission as a preening soldier in Ambroise Thomas’s Le Caïd (The Qaid). Speeding through the pattering French lines, Pursell fused razor-sharp diction and wittily detailed moves into a second feat of operatic alchemy.

Mezzo-soprano Ashley Dixon dazzled first in “Dopo notte” (After the night), a fiendishly decorated trouser-role aria from Handel’s Ariodante. The percolating vocal line and abundant ornaments came off without a show of strain or effort. Dixon was in an evening gown; by the foaming final measures, a listener could easily imagine her character in costume on the stormy seas Ariodante was recollecting. Later on, as Massenet’s Cinderella, Dixon rendered the hopeful ball-goer’s infatuation with Price Charming (the admirable tenor Christopher Oglesby) with a demure, flowing liquidity.

There was lots more to relish. Soprano Natalie Image brought a silvery tone, tight vibrato, and rippling emotion to a selection from Mozart’s Idomeneo. At the end of the evening, she kicked off her shoes and plopped down to feel sorry for herself in Donizetti’s La Fille du Régiment (The daughter of the regiment), then sparked to life when the company of her adored soldiers — the rest of the Adler ensemble — marched down the Herbst aisles to join their beloved “Daughter.”

Oglesby made a small feast of “Vaudémont’s Romance” from Tchaikovsky’s Iolanta, his voice blooming open wonderfully at the high end. Mezzo Simone McIntosh brought a cyclonic vocal power to a fervent aria from Mozart’s rarely heard Lucio Silla. Countertenor Aryeh Nussbaum Cohen was by turns muscular and tender in a number from Handel’s Siroe. Berlioz’s “Le Spectre de la Rose” (The specter of the rose), from Les Nuits d’Été (Summer nights), revealed Cohen’s intense stage presence but stretched his vocal range. Risk, even when the results fall sort, is a a good thing.

Among the less satisfying moments was a duet from Verdi’s Don Carlo, harshly sung by soprano Mary Evelyn Hangley and tenor Christopher Colmenero, neither of whom had tailored their voices to the size of the 900-seat hall. Tenor SeokJong Back, who never quite inhabited Cavaradossi’s “Recondita armonia” (Concealed harmony) from Tosca, sang a number from Cilea’s L’arlesiana with a daring, expansive vigor after intermission.

With one exception, a porous backdrop for the Tosca aria, Kim and the orchestra partnered splendidly with the singers. It was no mean feat for the conductor, who was positioned behind the singers and had to connect with them by musical intuition and sidelong glances. Even in a slightly imbalanced program that had all the early and Russian music in the first half and the mostly lighter French and Italian fare in the second, the evening glowed with vocal and orchestral variety. It all raised the implicit promise of much more to come.

The Future Is Bright With S.F. Opera’s Adler Fellows

A powerhouse concert showcases the impressive range of talent and accomplishment in the class of 2018.