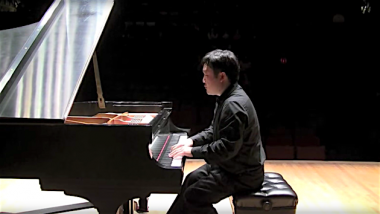 A year after its compelling, personality-filled debut, the second edition of the San Francisco International Piano Festival has returned. Presented by New Piano Collective, an intrepid group of alumni of the Eastman School of Music headed by local pianist Jeff LaDeur, the pianists are currently presenting daily concerts at different venues in and around the city. 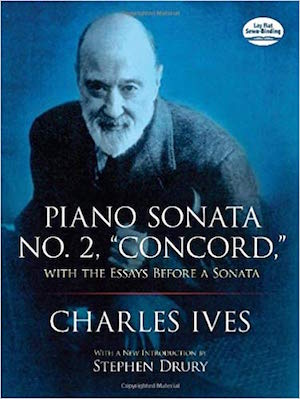 The concert at the Gunn Theatre at the Legion of Honour was an exploration of possibilities of what a piano recital can be in the 21st century. Albert Kim used recorded sound and visuals to augment the sensory experience of the performance beyond the sound of the piano. in performing Charles Ives Sonata No. 2: “Concord.” A large projection screen was hung above the piano, displaying photographs from around Concord, Massachusetts, as well as the text of “Essays before a Sonata,” a narrative about the work written by the composer himself. To those unfamiliar with the work, the essay provided contextual information to better understand the work. Those who found the projection to be distracting could just close their eyes and listen, as the stage itself was dimly lit and there was little else to see.

The impactful four-note figure from Beethoven’s Fifth Symphony was peppered throughout the work, providing a unifying force, while the four movements representing poet/philosophers, Emerson, Hawthorne, The Alcotts, and Thoreau brought an “impression of the spirit of transcendentalism,” as Ives wrote. The cacophony of the street scene contrasted vividly with the peaceful hymns in “Hawthorne,” but the mostly peaceful movement, “The Alcotts,” conflicted with the angry outbursts of the Beethoven theme. Kim maintained a high level of command through the musically and intellectually challenging piece.

In these days of sensory overload, with the audience accustomed to experiencing multiple sensory stimuli simultaneously, are elements beyond sound truly necessary in a concert? We now expect supertitles at the opera, and the San Francisco Symphony has experimented with adding projections and visual elements, the movie nights notwithstanding.

When presenting a less familiar repertoire, many artists make brief remarks about the piece to provide context. For programmatic music, such as the “Concord Sonata,” there is a compelling argument that it benefits the audience to augment the performance with visuals to provide the narrative. Multimedia displays give today’s audience a richer and more engaging experience to help form a stronger connection to the work. It is perhaps not unlike the audio tours at museums. You can always take it or leave it.

The concert opened with Charlie Usher’s Aubervilliers, with “mono audio.” Over a persistent, dimly audible G-sharp tone from a speaker, it sounded as if Kim was improvising against the recorded “noise.” Was it to evoke a night scene, walking through Aubervilliers in the outskirts of Paris? It was a stirring introduction to the Ives sonata.

The second half of the concert returned to a more orthodox setting, with just a Steinway on the stage. But the performance by Bobby Mitchell was anything but conventional. Mitchell described Schumann’s Piano Sonata, Op.11, signed “Florestan and Eusebius,” as being “strange” and “emo.” As he dove into the work, he certainly elicited all the tension and agitation suggested by its exaggerated rhythms. While the extreme mania of the personality was well depicted, save for the serene Aria movement and the Intermezzo in the Scherzo, the tempi and rhythm were at times extremely capricious to the point where dotted rhythms were indistinct, and the 3/4 rhythm of the last movement was often lost, with quarter notes played as if they were eighth notes. While it drove the sense of mania to the extreme, the overall piece lost coherence in Mitchell’s interpretation.

New Festival Lets Pianists Be Themselves (Like You Could Stop Them)

The San Francisco International Piano Festival has the pianists in charge of what’s on the program, making for an eclectic mix of interests and experiences.