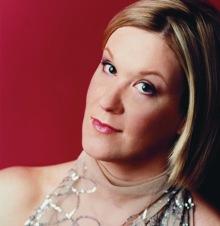 Alice Coote: Song at Its Finest

Mezzo-soprano Alice Coote is a great artist. In an unforgettable San Francisco Performances recital Friday in Herbst Theatre, which also marked her local recital debut, Coote and her equally brilliant accompanist, Julius Drake, lavished on their audience an entire evening of songs in English, giving more attention to tone and color than I have heard in many a year.

Rather than merely underscoring and italicizing words in ways that can seem fussy or overly intellectualized, Coote and Drake unstintingly probed for deeper meaning. The seemingly infinite varieties of nuance that Coote attached to her chosen repertoire seemed to spring organically from the heart of each composer and poet, and rang with emotional truth. Drake was her equal partner, transcending the limitations of his half-open instrument to play with eloquence. The results were mesmerizing.

The mezzo’s dress and body language immediately signaled that this would be a night like no other. Ditching concert gown formality, she strode on stage in black tight slacks, a body-hugging, glistening silver-spangled top that descended below the waist, and a pair of stiletto heels that might easily find their way into a San Francisco magazine photo shoot. It was a terribly “don’t mess with me” outfit.

Launching into Edward Elgar’s Speak, music! and Pleading, Coote was a whirligig of restless energy: leaning, bending, lurching, then standing erect like a warrior of song — doing whatever she felt necessary to communicate sound and feeling in Herbst’s notoriously dry acoustic. Unfailingly projecting across the proscenium to her audience, she deftly used movement, which settled somewhat after the first set, that was not only fascinating but also deeply expressive.

A Voice of Infinite Variety

As anyone can attest who witnessed either of Coote’s San Francisco Opera performances, her 2002 debut in Handel’s Alcina or her 2008 turn in Mozart’s Idomeneo, she is an impassioned artist who seems to hold nothing back. Sustaining her through the huge outpourings of energy that have earned her the coveted Brigitte Fassbaender Award for Lieder Interpretation and the Decca Kathleen Ferrier Prize is an impeccably controlled, rock-solid instrument.

Most notable are her rapt, hushed voice, which she can pare down to a mere sliver of sound; her ability to sound high notes with either substantial force or ravishing, sweet purity; and a huge palette of colors and dynamics that she alters to express wonder, horror, joy, despair, and the like. How many singers are capable of investing a single word with three different shifts of dynamics and color? Coote not only did so with the word last in the song “In Haven” from Elgar’s Sea Pictures, but in addition made emotional sense of each shift.

Her instrument is not perfect. On this night, at least, hoarseness occasionally marred the unbroken flow of sound, especially when she pulled out all the stops at the end of Sea Pictures. There was also occasional shrillness when she sang full-out higher in the range. So fine was her artistry that the faults rarely detracted from her impact.

Ranging Over the British Isles

Save for one riveting set by Dominick Argento, who was born in 1927 in York, Pennsylvania, the recital consisted solely of songs from the British Isles by composers who were born in the 19th century and lived into the 20th. Elgar surfaced twice, first in the opening set, then in the five songs from Sea Pictures that closed the first half. Between came music by Quilter and Stanford. The second set, which began with four songs from Argento’s stunning Songs From the Diary of Virginia Woolf, also included music by Pell, Stanford, Warlock, Vaughan Williams, and Gurney, plus two seldom-programmed female composers, Liza Lehmann and Maude Valerie White.

Argento wrote his eight-song cycle for Janet Baker, who debuted the songs with Martin Isepp in 1975. The cycle begins with what may have been Woolf’s first diary entry in April 1919, and ends with the last entry in March 1941. Three months later, she committed suicide.

If the first entry ends on a heavenly note (Drake was outstanding as he sustained Coote’s energy through the piano postlude), the final entry’s musical repetitions and abrupt shifts leave no doubt that Woolf was deeply disturbed. Argento’s laser-sharp ability to probe beneath the writer’s seemingly innocuous words to reveal an unbridgeable psychic split seemed tailor made for Coote’s interpretive genius. The final song was so emotionally devastating as to leave me gasping in disbelief.

The contrast between Argento’s psychic exhumation and the old-fashioned simplicity of Lehmann’s Love, if you knew the light and Ah, moon of my delight could not have been greater. Coote’s gorgeous, pure, high climax on the word soul, together with her ability to repeat the final line of the second song extremely softly while maintaining the energy of her louder singing, were exceptional.

The set of classic English songs that followed was performed with the same artifice-free artfulness that distinguished the work of both Baker and Kathleen Ferrier before her. If Coote’s rendition of Vaughan Williams’ Silent Noon was more interventionist than Ferrier’s, her near-silent intoning of the line “’Tis visible silence, still as the hour glass,” and her perfect octave leap at the end, were on the same exalted plane.

Only a supreme artist would dare to conclude a recital, not with a glorious high punch, but instead with a soft, low note that describes impending death. With Drake’s piano dying off at the end at the end of Gurney’s Lights Out, the artists took their leave. Despite prolonged applause and three sets of bows, Coote honored the song’s meaning and signaled that she had given her all. She most certainly did. May she only return soon.