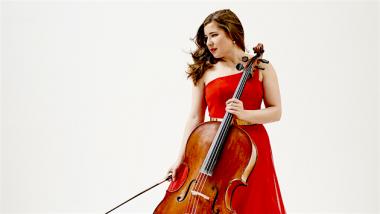 Alisa Weilerstein Performs Bach in a Monumental and Exhausting Recital

The accomplished young cellist Alisa Weilerstein is known more for her performances of Elgar and Shostakovich than for her work in the music of the Baroque. With an extensive discography and a busy calendar of concerts and recitals, she is deeply committed to passionate interpretations of the grand pieces of Romantic and modern cello repertoire.

Even so, for Weilerstein as for many cellists, the formidable heights of J. S. Bach’s six suites for solo cello loom as a challenge not to be ignored. This week, she played all six in a single recital for Cal Performances, 42 separate movements lasting three hours, all from memory — a feat as extraordinary as free-soloing El Capitan.

The Bach suites share with Baroque architecture a powerful sense of structure underlying a swirling, even flamboyant surface that both decorates and transcends its framework. The structure is inherent in the clarity of phrase, affect, and genre that the late Baroque — and Bach, especially — lived and breathed: An exploratory prelude begins each suite, followed by a predictable series of dances — allemande, courante, sarabande; a pair of minuets, bourrées, or gavottes, and a final gigue. How artfully Bach shapes and stretches this formula amounts to a masterpiece of invention and surprise unmatched by any other Baroque composer.

Weilerstein’s interpretation gave us inventiveness at almost every turn, reveling in surprising sounds and sinuous lines of melody — but very little sense of structure. We might hear a firmly articulated line — say, a fugue theme precisely sounded with bell-like clarity: but consistently, and almost randomly, Weilerstein would toss us into a sea of sixteenth-notes, foaming and uncertain waves of sound. Cadences that should have marked the end of a section of dance music — the expected moments of pause as the dance turns back to repeat a section, or prepares to move on to a new section — were played not as signs of structure, but as startling surges of energy, as her bow fiercely accelerated, almost as if she could not wait for the next discovery.

Such impetuous interpretation was often thrilling, but had its costs. Bach’s carefully constructed outline was too often indiscernible, obscured by a fierce mountain stream of notes and sounds. Points of repetition, subtle variations, and intricate rhythms of phrasing were submerged beneath the rich and often gorgeous texture of line and sonority. Sometimes a dance just needs to be a dance.

At first — and at moments throughout the long recital — Weilerstein’s passionate and deeply Romantic interpretation felt exciting, even revelatory. But without the necessary signpost moments of relaxation, quiet, and even silence, the suites could not maintain the initial sense of exhilaration. The third suite, in C major — a key that allows the cellist to revel in the resonance of her open strings — marked the high point of the recital, where inventiveness and form were still compatible. The fourth suite seemed particularly muddied and uncertain in shape, and the two final suites, formidable in technical demands and length, came too late in the recital to sustain a momentum of engagement.

This season, Cal Performances programmed two recitals of the entire Bach suite — Yo Yo Ma’s in the vast Greek Theatre in September (which I also reviewed for San Francisco Classical Voice), and Weilerstein’s in the more intimate First Congregational Church of Berkeley. As splendid as Bach’s music is, and as dynamic as the performances were, programming all six suites is too much for one evening — if not for the cellist, at least for most of the audience.

Weilerstein has recorded other, more modern, music for solo cello; a shorter recital pairing some of the Bach suites with, perhaps, Kodaly might prove ultimately more fulfilling.

The cellist gives a marathon performance of Bach at the Greek.

An Interview With Alisa Weilerstein