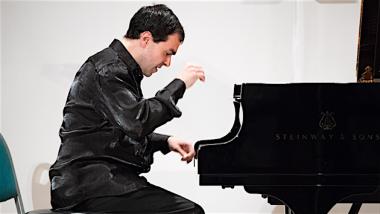 Spanish music by Spaniards — a definition that lets out Bizet, Debussy, Rimsky-Korsakov, Ravel, and several other French or Russian musical tourists — rarely gets a comprehensive hearing in America. We do encounter some short pieces at piano recitals now and then (and of course, what would the guitar repertoire be without Spanish music?) But the kind of century-spanning survey that the Jacaranda series closed its 15th season with May 19 at Santa Monica’s First Presbyterian Church was unusual, welcome, needed, and often enlightening.

Rather than scatter its energy among a slew of composers or concentrate upon just one, Jacaranda picked three with roughly a half-century separating their work: Manuel de Falla, who most personifies Spanish-made music to the outside world; Roberto Gerhard, who became a modernist-in-exile in England after the Spanish Civil War; and an intriguing post-Franco figure who turns 40 next year, Tomas Peire-Serrate. Each half of the program had a clever chronological pattern: the first half went from Falla to Gerhard to Peire-Serrate, and the second reversed the order — Peire-Serrate, Gerhard, and back to Falla.

Consequently, the distinct flavor of Spanish (or actually Andalusian) music led off the concert in Falla’s Fantasia Baetica, a flashy, technically difficult ramble in and out and back into the idiom as delivered with plenty of rubato by Spanish pianist José Menor. When we revisited Falla at the end, guitarist Michael Kudirka was ready with Homenaje a Debussy — which sounds nothing like Debussy — and one of Falla’s greatest hits, Danza No. 1 from La Vida Breve. The impact of Falla’s wholesale adoption of spiky neo-classicism, the Concerto for Harpsichord and Five Instruments, with new-music expert Gloria Cheng on the keyboard, was diminished by the placement of the solo instrument behind the quintet, making it sound like a chamber piece with harpsichord continuo.

Gerhard is a terribly underrated figure, rarely heard anymore even though he burst forth in the 1950s and ’60s with several rigorous yet stimulating orchestral pieces that are full of imaginative color. His homeland roots were revealed in the Three Impromptus for piano (with Menor), whose initial Spanish flavor gradually turns abstract, and the Fantasia for guitar, played with swagger by Kudirka. The String Quartet No. 2, as played by the Lyris Quartet, showed Gerhard at his most introspective and severe, full of weird special effects, finally generating some agitation down the stretch. I wouldn’t recommend this selection as an introduction to this composer, though. Better to start with the four numbered symphonies, especially the Third with its wild, spooky injections of early electronic sounds.

Finally, Jacaranda gave us a glimpse of present-day Spanish music though Peire-Serrate, who is currently at UCLA pursuing a doctorate and working in Hollywood, and who appears to be an internationalist somewhat removed from his native Catalonia. His Toccata for piano was a tour-de-force of relentless 16th notes and contrasting dynamics, with Menor bringing forth a wealth of shadings from the keyboard as the composer turned the pages of his score himself.

Of Peire-Serrate’s other two scores — React for clarinet and string quartet, in which the wind player (James Sullivan) is the protagonist, and Awake for clarinet, flute, violin, cello, and percussion — it was the latter that impressed me the most. Awake was awash in fluid, sensual sonorities where the colors are everything, with delicate crystalline strokes on cymbals, vibraphone, and glockenspiel, and deep rolls on the bass drum when things started to buzz ominously midway through. It may have been a coincidence — but probably not — that Jacaranda’s entire 15th season was given the overall title “Awake” in anticipation of this lovely work.

As an introduction to the riches of the Spanish classical tradition, you could not do any better than this concert.