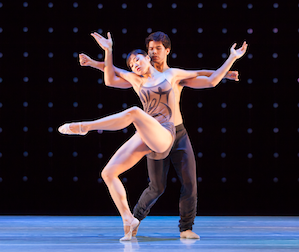 Alonzo King: Lost in the Stars

Alonzo King, having been anointed a brilliantly breakaway classical choreographer by a prominent dance critic, is in the process of displaying just about everything he can do — in one show. Or maybe everything else he can do, since his new evening-length work, Constellation, takes his Lines Dance Company ballerinas off-pointe and away from the naturalistic environment of last year’s stunning Resin.

This year at the Lam Center, the dancers are in soft shoes, the electricity is generated by the lighting as much as by the intertwining and endlessly reaching bodies, and the music ranges from medieval (an amazing recording of the Russian Orthodox The Great Litany) to baroque, and classical to contemporary. King, his lighting designers, costumers and guest artist, in addition to his dozen fantastic dancers, serve up a rich, at times overwhelming feast.

But first a word about the word constellation, the ballet’s title (replacing, most sensibly) the original title, “Shadow Dispersing Clarity.” It can refer to a grouping of stars, but it can also mean a gathering of related persons, things, or ideas. The constellation of the latter sometimes poses a problem. There are so many things going in so many directions; so many people in so many differently styled costumes; so many moods in the solos and the partnered work. Constellation has infinite reach, to put it positively, but at times it suffers from ADD.

The twinkling lights, credited to Axel Morgenthaler, who worked with set designer Jim Campbell, do suggest constellations when they show up as backdrops. Sometimes they’re strings of lights hung closely together; other times, they appear to be mounted on scrims. And strikingly at one point, they’re panels carried by dancers, whose legs are imaged upon them as well seen as walking beneath them ... sort of like the little girl on the box of Morton’s Salt, image within image. Another time, strings of lights become reins for a pair of men, who lean against them to emphasize the interplay of the body and gravity. At the start of Act 2, little lighted balls roll onstage, providing a touch of comic relief. The dancers pick them up, play with them, pass them, and one dancer holds them at chest and waist level…Orion on the hoof.

Israeli mezzo-soprano and Adler Fellow Maya Lahyani was onstage to sing music of Handel, Richard Strauss, and Vivaldi. In a ruffly raspberry kimono designed by Colleen Quen and Robert Rosenwasser, she was in lustrous voice.

Maybe it’s time to discuss the dancing. Take this delay as an indicator of how distracting everything was.

The dancers are amazing in the amplitude of their movement, in the investigation of space that King brings them to, and in the gutsy trust they put in themselves and in each other. The men, some of whom appear to have minimal classical training but a superbly explosive quality, and some of whom look well versed in ballet, illustrate the endless kinesthetic possibilities that a choreographer of King’s inventiveness can explore. The women are powerful, and many are tall. They have tremendous reach in their arms, in their legs, in the speed of their turns and the space they can devour with their leaps. In partner work this can be distracting if they’re paired with men who are smaller, since the choreography sometimes (though not always; there was a lovely man-woman brawl that ended in a draw) suggests traditional male/female roles. I trust that here I’m opening a huge can of worms. Everyone’s equal, but some people are simply bigger than others and it doesn’t necessarily make for a good outcome.

The final duet, stunningly performed by Meredith Webster and David Harvey, was a case in point. Close-partnered, involving leaning into each other for support, delineating each other’s bodies, and rolling over and around each other to pull closer and reach apart, it was filled with emotional intensity. It seemed to end, went away for one section, then returned for another entire section, leaving the duo panting and this onlooker exhausted. It exemplified the onrush of imagery and music and the overall lack of room to breathe sadly endemic in Constellation. In dance as in life, sometimes there truly can be too much information.