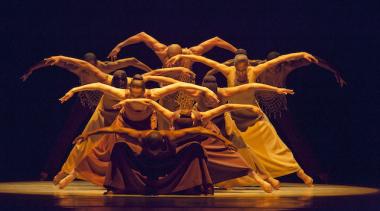 It’s really difficult to continue to square the lack of choreographic brilliance with the stageful of brilliant dancers. Although it’s wonderful that the Ailey company is doing so well by the works of Paul Taylor –- his Piazzolla Caldera is to be performed Thursday night and Saturday afternoon –- you continue to hope for better original creations.

Two exceptions on the opening bill: the masterwork Revelations, the Ailey-choreographed 1960 cornerstone of the repertory; and, for sheer beauty, gutsiness, and tender nuance, the pas de deux “A Case of You,” plucked from former Ailey star and artistic director Judith Jamison’s longer 2004 ballet, Reminiscin’.

Open Door, by Ronald K. Brown and Awakening, by Robert Battle, the company’s artistic director, premiered in 2015. In their first west coast outings, both wowed the crowd. Open Door, set to Afro-Latin melodies by Luis Demetrio, Arturo O’Farrill, and Tito Puente, opened the evening with two of the troupe’s most experienced dancers, Linda Celeste Sims and Matthew Rushing, moving singly and together to the sinuous rhythms of Demetrio’s “La Puerta.” Together with eight other dancers for the ensuing festival of theatrical, Latin dance, they rippled sinuously in unison, extended themselves into stunning arabesques, reflected the rhythms with every gesture. The ballet evoked the allure of the tropics, but felt overlong --- and short on dramatic tension. Still, there was knockout dancing by all, particularly Daniel Harder and Belen Pereyra as a couple in red and, soloing, Jamar Roberts of the soaring leaps and energetic floorwork.

Roberts, in fact, captured the evening’s Hardest Working Man title. His second appearance, leading the cast in Awakening, the first piece made by Battle since becoming artistic director in 2011, was even more demanding.

Dedicated to longtime Ailey benefactor Joan Weill and set to “Turning,” a discordant, brassy, John Mackey composition, Awakening puts a unisex cast of 12 in white pajamas by Jon Taylor. They’re sleeping; they awake, crawl, rise, cower, and huddle. Several times, it falls to Roberts to lead this cluster of beings from the right side of the stage to, oh, sort of the left. Three times they wind up where they started, which may speak to some astral-planetary orbit, roughly hinted at by the appearance of twinkling lights in geometric pegboard formation, designed by Al Crawford. Eventually, they cease to be passive and begin to resist, although we’re not let in on what they’re resisting. It’s hard to tell if they’re stars, the subjects of space invaders, a lost astronaut corps or maybe even Chosen Ones, judging from the extent to which Battle’s choreography quotes from Nijinsky’s 1913 Rite of Spring, with ferocious jumps to match the banging brasses. This is not unpleasant, but it’s not very original, either, and there is no discernible message.  That the dancers are becoming a strong, invincible community seems to be one takeaway as they form interlinked trios and disport themselves in folkdance motifs.

As for Roberts, he is as eye-catching a presence in the company as Jamison used to be. Tall, he’s gifted with strength, musicality, and an awesome wingspan. He was also a generous partner, dancing with Jacqueline Green in Jamison’s “A Case of You,” a duet that’s intimately extroverted, achingly loving. It’s set to a Joni Mitchell song, huskily voiced by Diana Krall. Green, another standout, gowned by Jon Taylor in stunning scarlet, runs at her partner, springing into his arms, wrapping him in her legs. Another time she’s flung herself up high, high on his thighs, there to be held; later, she’s his seesaw, held between his legs. The partnering is audacious and stunning; so is the sweetness reflected in turns, lifts and embraces. The authority of the choreography removes any hint of syrup from the goings-on. It feels like real life, only better.

Revelations drew superb performances all around. Particular standouts included Linda Celeste Sims and Glenn Allen Sims, both breathtaking in “Fix Me Jesus”; Matthew Rushing the eloquent soloist of the difficult and heartrending “I Wanna Be Ready,” and Michael Jackson Jr., Sean Aaron Carmon, and Michael Francis McBride as the “Sinner Man” trio.