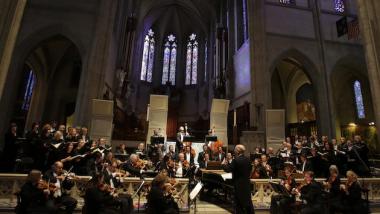 A confession: The prospect of hearing all four of Bach’s orchestral suites and nothing else did not promise the most absorbing Sunday afternoon. Similarly structured, with elaborate and sometimes pompous-seeming ABA overtures followed by a sequence of dance movements bound by a single key signature, the pieces had never been on my Bach Hall of Fame ballot.

I’m happily chagrined to say, after the American Bach Soloists’s delectable concert at St. Mark’s Lutheran Church in San Francisco, that my ballot is now up for some serious revision. (Are the Brandenburgs due for a challenge?) One delight followed another in this shining account of the orchestral suites. It provided yet another example that even the Bach we think we know can astound, fascinate, ravish, and reveal new depths when the music is played with the kind of conviction and artistry that was on such abundant offer here.

Sunday’s concert had multiple stars, the composer first among them. Bach, as he so often did, both employed and flouted the limitations of form to frame his genius. In poised minuets and spry gavottes, a pensive sarabande or busily-figured gigues, the music both observed and mastered conventions. And then there were the rule-bending innovations, from the brassy, festive exuberance of the Réjouissance in the Suite No. 4, which opened the concert, to the seraphically becalmed Air (famously known by its G-String moniker) in the program-ending Suite No. 3.

Fugues broke out here and there. So did witty byplay, in woodwind conversations and transverse passagework in the strings. There were moments of folksy, Brueghelesque thumping and others of surpassing delicacy and sensual inquisitiveness.

ABS Artistic and Music Director Jeffrey Thomas earned star status with his peerless work on the podium. The suites (like other Baroque works) can turn busy and dutiful when they’re played too much for speed and showiness. That never happened at St. Mark’s, one of four weekend venues for the ensemble. Even when things got whirring along, a sense of savoring both the broad design and finely wrought detail prevailed. Tempos were both tactful and compelling, the textures transparent and brawny by turns. Contrasts and balance were the defining virtues.

The instruments, whether period or period copies, figured importantly. The strings sounded lithe and mellow, never too sharp-tongued or incisive, as modern instruments can. The light-voiced brasses had a jolly time, barking and braying through their fanfares. The oboes needled and twined together. The bassoon burbled and sang. Only the timpani, which perhaps unavoidably sounded a little too thunderous in the vaulted sanctuary, overstepped.

Just after intermission, bassoonist Dominic Teresi commanded attention with bubbly and lyrical riffs in the Suite No. 1 Ouverture. The oboes chipped in cheerfully in the Bourrée. The violas had a glowing little ensemble number in the closing Passepied.

All the strings, with the demure assistance of harpsichordist Corey Jamason, gave the Suite No. 3 Air (on a G String) a reading that was sweet without ever turning saccharine. The phrasing was choice, with just enough air between the plush, wonderstruck exhalations.

About the extended opening numbers of each suite, the “Ouvertures”: they pose the most formidable challenges in the suites. Thomas and the players had their only stumbles here, especially in a slightly unruly beginning to the Suite No. 4 and then some fuzziness in the Suite No. 3. But credit Thomas and the band for trying to capture the full amplitude of these big musical scene setters. The contrasting sections stood out in high relief, with plenty of bravura shine throughout. And when the grand and stately pace of the A section returned each time, there was a sense both of satisfaction and anticipation.

Monteverdi's Genius on Full Display With the American Bach Soloists

A program of ravishing beauty draws from the timeless Vespro della Beata Vergine.

Drama there was, but ABS’s revivifying take on Bach’s masterpiece was mainly gorgeous.