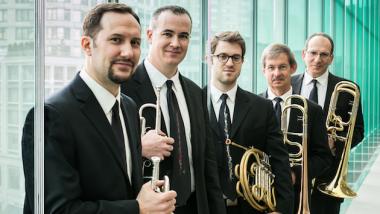 The American Brass Quintet Blows the Roof Off Bing

Stanford Live’s theme for the 2017–18 season is “The American Sound.” The American Brass Quintet, visiting Bing Concert Hall on Sunday, October 15, made a special contribution to that theme with a set of brief marches and dances from the Revolutionary and early Federal period in the late 18th century. The dances were by Alexander Reinagle, a Philadelphia resident probably best remembered today by beginning piano students. The pleasant tunes and plain block harmonies, with occasional ornamentation, of all these pieces translated well to brass arrangement.

Of course, it doesn’t take a reach back over 200 years for a brass quintet to sound American. As trumpeter Kevin Cobb explained to the audience, the modern brass quintet is a post-World War II American development. In its nearly 60 years of existence, the ABQ has commissioned and otherwise acquired a vast repertoire of new works, mostly by American composers. The Quintet brought three of them to Bing, two written within the past couple of years and the third dating from 1987.

The Brass Quintet No. 2 “American” by Kenneth Fuchs is a single movement in an extroverted modernist style, with some lyric passages but dominated by crisp, declamatory jagged chords and extensive use of mutes, which made their only appearance in the concert here. These were used to give this work a variety of colors, from distant hunting calls to duck-like quacks to the classic “wah-wah” effect.

The other two contemporary works were more neo-Romantic, generally lyric and melodic in style, occasionally quieter and thoughtful in character, and presenting the brass with broad, open sound. Eric Ewazen’s Colchester Fantasy, written in 1987 while he was teaching in that English town, has four movements named for local pubs, but eschews any distinctive Englishness of style. Ewazen was inspired by the meanings of the pub names — thus “The Dragoon” is the harshest and most military movement and “The Marquis of Granby” is a formal chorale — and while maintaining a consistent tone color, creates variety with much accentuation and changes in dynamics.

The third new piece was written earlier this year by Steven Franklin, a then 21-year-old recent graduate of the Curtis Institute, whom the Quintet members had met a couple years earlier when giving a master class there. His Three Romances is openly inspired by, though not intended to copy, Romantic music from Robert Schumann — who wrote a work with the same title — to Richard Strauss. The result, even in its lighter moments, is restrained music of dreamy melancholy, constructed largely by intertwining multiple melodic lines that move in and out of the general mix. The harmonic and melodic style has a distinct cinematic flavor.

A brass ensemble concert should not be complete without some juicy and crunchy 16th-century music. The ABQ provided two sets of these: one of English partsongs and instrumental consort pieces and the other of continental canons. The partsongs, mostly by Thomas Morley, were exact transcriptions of the original vocal lines, but arranged with imagination: One two-part song was played by the two trumpets, immediately followed by a three-part song given to the other members of the quintet, two trombones and a horn. The canons, which included works by Palestrina and Josquin, built up great masses of overlaid sound. They were preceded by a brief lecture by hornist Eric Reed explaining what a canon is, with musical examples given by the other players.

This was my first experience of brass chamber music at Bing. It’s a small enough auditorium for a vivid and close-up sound from these powerful instruments, only occasionally in the Franklin piece getting harsh enough to overwhelm the sonics and causing the quality of the sound to break up. But Bing is also large enough to provide a solid and prominent reverberation that gave the quintet’s sound a welcome fullness to match its immediacy.