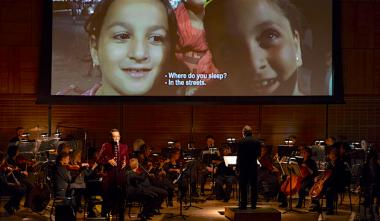 What do ancient rug fragments, Indo-Pakistani ragas, and Syrian refugees have in common? They all inspired pieces played by the American Composers Orchestra led by George Manahan Thursday, April 11, in Zankel Hall. The main event of the evening was the New York premiere of Du Yun and Khaled Jarrar’s Where We Lost Our Shadows, but the program was rounded out with Morton Feldman’s Turfan Fragments (1980) and Gloria Coates’s first symphony, Music on Open Strings (1973–74).

The rugs inspired Feldman. In a program note, he describes ancient carpet fragments too decayed to reveal a clear pattern but sufficiently preserved to establish a long textile tradition; he then likens his piece to these fragments, gesturing at Western music without fully embodying it. The result was a hushed work where blocks of obsessively repeated cells were juxtaposed with no transition.

Some blocks were dense, with different instruments playing cells of different lengths in a miasmic tapestry, while others comprised a single note plucked out dozens of times without variation. The dense blocks were surely tricky to coordinate, but the sparse ones seemed equally virtuosic in their required precision; in such exposed music, even the smallest human error — and there were, inevitably, several — sticks out like a dandelion in an astroturf lawn.

Subtle virtuosity was on display in Coates’s string-orchestra symphony as well. At first, the instruments were tuned to an unusual five-note scale so that they could play a heavy, angular melody entirely on the open strings, gradually dissolving into a sea of queasy glissandos. Later, the musicians, while still playing, re-tuned their instruments to the standard Western tuning, with each player transitioning at a different time in a bewilderment of constant flux. As a piece of music, it was satisfying; as a piece of intonational witchcraft, it was jaw-dropping.

The panel that preceded Where We Lost Our Shadows gave the impression that the work would follow the story of a group of Syrian refugees entering Europe, so one might have expected it to be more overtly programmatic than the other two works. And indeed, there were moments that suggested a clear narrative, like the furious wall of sound unleashed after a mention of war or the plaintive oboe line slowly drowned out by crass interjections, but as a whole the piece treads lightly when it comes to its overarching story.

Though the work includes video interviews by Khaled Jarrar of several Syrian refugees,  they are short, and do little more than sketch the middle of a story whose beginning and end are omitted. The confident hope evinced by the children is devastating, but it’s suspended in a decontextualized present.

Paradoxically, this lack of overall narrative helped the piece cohere. Instead of the video dictating the music, the two mediums felt on equal footing, parts of a larger whole about human migration writ large. So instead of wondering why ragas played a key role in a piece about Syrians, I found myself meditating on how people and musical traditions wend their way around the world; the story of the Syrian refugees felt like one example, not an organizing spine.

Not everything gelled. Vocalists Helga Davis and Ali Sethi were magnificent in their solo moments, but their distinctive styles clashed when they sang together. Percussion soloist Shayna Dunkelman’s blistering toccatas sometimes overwhelmed the other performers. The transitions between the videos and the orchestral passages were jarring at times. But when nine players held up large suns of reflective foil and shook them at the audience — an echo of the work’s beginning, when Dunkelman held up a massive sun and sent a spotlight shimmering around the otherwise pitch-black auditorium — the hall was awash with peace. It was an optimistic ending, a vision of a harmonious future, easily achieved. I hope we make a world that lives up to it.

Soprano Julia Bullock’s revelatory one-woman show blazes with insight and emotion, and the soprano’s own power.

Musicians Speak Up - and Act - Against Mistreatment of Refugees

Musicians call for Europe and surrounding countries in Africa and the Middle East to support Syrian refugees.