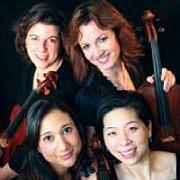 Americanism on the Rise

David Bratman on March 24, 2009
The San Francisco Piano Quartet discovered American music on Sunday afternoon at the Noe Valley Ministry in the city, as part of the Noe Valley Chamber Music series. That is to say, they presented a program tracing the discovery of self-awareness of Americanism in the works of several generations of composers. An academic presentation on this complex subject it was not, but as a pretext for presenting a series of interesting chamber compositions, it worked fine.

Pianist Avi Downes gave the brief narration connecting the pieces together. The concert was framed by dividing Antonín Dvořák’s Piano Quartet in E-flat, Op. 87, into two parts. The concert began with the first three movements and concluded with the finale. The players gave a light, engaging performance notably free of drag. They were more effective in the heavy tuttis, and some light whisperings, in the first movement than in the dramatic interludes of the slow movement. The third movement was the most charming, a scherzo redolent of Viennese waltz framing a lively, Czech-style, dotted-rhythm trio section.

The Piano Quartet was not one of the compositions Dvořák wrote during his three-year sojourn in America in 1892-95. Rather, it was one of the earlier works that had convinced Jeannette Thurber, the philanthropist who invited him to come here to teach, that Dvořák’s understanding of his own Czech musical culture went deep enough that he could help Americans develop their national musical style.

The rest of the concert was devoted to exploring the composer’s legacy as this agent of our self-discovery. First we had works by two of his American pupils. Harry Burleigh was the man who introduced Dvořák to African-American spirituals and folk music, a discovery that led Dvořák to proclaim that this music should be the basis of an American national compositional school. In recognition of this, Downes played Burleigh’s arrangement of the spiritual In the Cold Moonlight for solo piano. It came across more as a quiet piano miniature than a religious hymn.

The American sound in classical music that developed in subsequent years, however, was more of a blend of African-American music with Eastern European immigrant music and some other sources. Here the post-Dvořák trail begins with another one of his pupils, Rubin Goldmark. Although American-born, Goldmark was closely attached to his Hungarian Jewish roots. (His uncle Karl remained in Budapest and Vienna and became a famous composer there.)

Downes told us that the first movement of Goldmark’s Piano Quartet in A Major is said to have rhythmic contours affiliated with Dvořák’s music. That’s putting it pretty mildly: From the moment that it began, even the melodic contours seemed awfully familiar. If it were played as a blind taste-test, I think most listeners would say, “Dvořák!” after just a few bars, and only later would they wonder if they’d named the right composer.

To the extent that Goldmark’s quartet differs from Dvořák’s, it does so in being heavily scored and more contrapuntal than its model. It’s also not quite as incisive. Nevertheless, it was a highly regarded work at the time of its composition in 1909, and it would be worth hearing in full.

Links to the Czech Master

The remainder of the program consisted of three works, one for each of the Quartet’s string players, accompanied by piano, by composers of three succeeding generations. Goldmark offered the link to the first of these, for at one point he gave a few composition lessons to the young George Gershwin. After Gershwin’s death, the great violinist Jascha Heifetz — a friend of the composer’s — arranged Gershwin’s Three Piano Preludes for violin and piano. Robin Sharp, also known as concertmaster of the San Francisco Chamber Orchestra, played these with Downes. Heifetz put a lot of imagination into these arrangements, which Sharp executed with gusto. The bent notes and double-stopping, some of it softly adding a new line behind the piano, increase the gentle, jazzy feeling of the pieces.

Leonard Bernstein, who considered himself Gershwin’s heir in melding popular and classical music, came next. Elizabeth Prior, with Downes, played a viola and piano arrangement of two Meditations from Bernstein’s Mass that the composer had extracted for cellist Mstislav Rostropovich. Naturally enough, given their dedicatee, these are virtuoso pieces, employing a great deal of double-stopping and other effects such as harmonics and playing on the bridge. Prior played all this slowly and carefully, giving the music lyrical effect without flamboyance.

The final work was the most open jazz-classical fusion of the bunch, the “Quasi bebop fugato” movement of Bay Area cellist-composer Sam Bass’ Jazz Sonata for cello and piano. Downes warned, before starting to play, that this is a work for fun, not seriousness, yet musically it’s quite interesting, especially a cello passage in pizzicato ostinato, with the same phrase being repeated many times in plucked notes. Angela Lee performed this and the rest of the movement with bright energy and, yes, a sense of fun.

The last thing that performers of works like these should be is shy. The San Francisco Piano Quartet is not an aggressive ensemble, but each of these musicians seemed happy to take the spotlight for a few minutes and display her own talents in the service of these steps in the journey of American musical self-discovery.