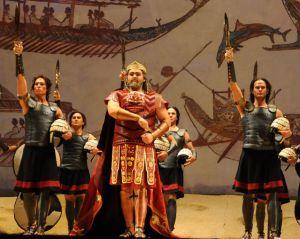 It has been a while since I checked in with Opera San José. On Sunday afternoon I heard its new production of Mozart’s Idomeneo. The opera was jointly produced with the Packard Humanities Institute, and the infusion of Packard cash was evident throughout the performance. In the tech world, the greatest successes are usually those first to market. Later entrants — in this case, the still-evolving Opera San José — have to struggle to gain a foothold. Even though OSJ has grown tremendously since it moved into the lovingly restored California Theatre several years ago (also a Packard project), the company’s work has often been characterized by a community theater ethos. With this production, however, OSJ was able to shed most of that and step everything up to the level of its ambition.

And what better opera to achieve that with than Idomeneo? Smaller (even larger) companies rarely present this opera, because it’s certainly not small. In the work, written when he was 25, Mozart attempted to outdo the grand, Greekish tragédies lyrique by Gluck that Mozart had encountered in Paris. Running over three and a half hours, the opera abounds with large choruses, integrated dancing, and difficult arias, not to mention eight or nine scene changes.

It’s also the most orchestrally conceived of Mozart’s stage works. The score’s musical riches are worth the effort, even though that effort included the construction of over 180 costumes by costume designer Johann Stegmeir.

Enter Packard. The tradition of a patron’s informing the content of an opera is as old as opera itself; indeed, it was the Elector of Mannheim who specified the subject and approved the libretto, cast, and other aspects of the Idomeneo commission. The sets, props, and costumes in this new production draw their inspiration from Greek archeology — something Packard also funds. Archeologically inspired design is not new to opera. The sets were very elaborate; especially impressive was a three-story temple in Act 3, designed by Steven Kemp. All these elements gave the production a coherent, unified vision, even as the occasional archeological curiosities got the mind churning (my favorites: the wacky, cello-shaped fur-and-leather shields). The production designers also allowed Mozart’s 18th-century opera design to come through by respecting things like the continuity of short and deep sets. As with opera of that era, these sets and costumes could be used in a variety of works. I would be surprised if OSJ and Packard fail to rent this production to other companies.

Like most Opera San José productions, Idomeneo is double-cast. I missed opening night due to a Caltrain accident, yet that proved fortuitous since, as a result, I heard second-cast tenor Alexander Boyer’s excellent singing of the title role. Although he has difficulty with coloratura, his beautiful but weighty tone is perfectly suited to this role. The other principal singers I heard — Betany Coffland (as Idamante), Jasmina Halimic (Elettra), and Sandra Bengochea (Ilia) — were fine but lacked the basic tonal beauty I associate with Mozart singing. I believe OSJ could broaden its artist residency program to include more veteran and established singers. Many young singers feel pushed to sound mature and operatic, while losing focus on the natural beauty of their voices. The result is a too fast but thin vibrato, as well as a mannered, “factory” style.

Additional principal roles in Idomeneo are the chorus, orchestra, and ballet. For the production, Opera San José brought guest conductor George Cleve, who, as a veteran Mozart festival director, knows his Wolfgang. He clearly drilled the orchestra in the appropriate style, and nothing seemed out of place. When the chorus held back in such choruses as the deceptively simple “Placido è il mar, andiamo,” it sounded quite lovely, but, like many opera choruses, it could turn into a vibrating wall of mush during loud passages. The program listed a special choral consultant, leading me to think the effort was hard-won. As for the dancing, opera companies often neglect ballet, but in this case OSJ employed a professional corps of 15 dancers, to Dennis Nahat’s effective choreography.

The evening’s only disappointment was a harbor and storm scene concluding Act 2. In the 1781 premiere, this was the highlight of the evening. Many extant 18th-century pictures show such operatic harbor scenes; some could have served as a point of departure for the set designers. Instead, the stage was left open, with a vague cyclorama backdrop bereft of perspective. This proved uninspiring for the stage direction: a clump of choral chaos. The scene also literally lost its sail (somebody seems to have omitted the part for wind machine).

Most American companies with sufficient resources present Idomeneo in gargantuan halls, thus distorting the innumerable details of this masterful score. To attend such an excellent production in the ideal 1,114-seat California Theatre is a rare and special opportunity.