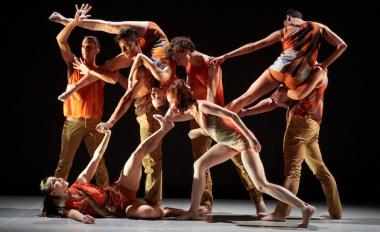 Amy Seiwert, whose Imagery dance group has fielded a wide range of creations, calls what she makes and what she does “ballet,” but that’s rather like calling Swan Lake “modern dance.” The nice thing about her work and the work she encourages, though, is that it doesn’t really matter what she chooses to call it. Based on Thursday’s first performance of Sketch 8/Origin Stories at ODC Theater, Seiwert, 19 years into a California-based career as a dancer and dance maker, is a woman of substantial creative gifts. These gifts she has turned to creating what she refers to as a safe environment for risk-taking in contemporary ballet choreography.

In Sketch 8 (the first Sketch was in 2011), Seiwert displays her gift for recognizing and eliciting talent in other artists, a knack for picking eight insanely good and versatile dancers — four men, four women — identified here as “collaborators,” and a distinctive choreographic voice.

She chose two other women choreographers to premiere works as well, artists with voices and goals of their own. It made for a rewarding evening.

The premise of Seiwert’s Sketch series is that it’s investigative and exploratory in its attempts to expand existing definitions of ballet, and if a new piece doesn’t quite work out as a finished ballet, it doesn’t really matter. Innovation matters, as do courage, collaboration, and experimentation.

It may come as no surprise to learn that all three ballets, or modern dances, or things somewhere in between, created by Seiwert and the other choreographers, Jennifer Archibald and Gabrielle Lamb, were successes. What is success? Let’s see if we can figure it out.

In the program book, each choreographer described a challenge she had set for herself in making her new work.

For Lamb, who directs her own company, Pigeonwing Dance in New York City, and has choreographed for stage and screen, including the Royal Winnipeg Ballet, Ballet Austin, and many other troupes (she also won a Princess Grace Award for choreography), the challenge in Lacunae, which opened the show, was adjusting to creating less of the piece on her own body than she was accustomed to. She did, after all, have eight other bodies to work with. But that new material created new challenges: “spaces we perceive as empty ... nevertheless hold history, meaning, and potential.” Thus lacunae. Lamb also spoke of the Holy Wind Spirit of the Navajo, and the idea that when it enters a person’s body, it gives “life, motion, speech, and the ability to stand upright and balance.” She wanted to engage, she said, with the invisible field of turbulence and tranquility fundamental to our existence.

Her work contrasted close and interdependent balancing and contact, separation and distance. The dance began with all the dancers in a row, a line of independent entities that would soon incrementally draw together into a unit. It then became possible to see among the eight dancers how, because of the density of Lamb’s creation — the dancers took on the aura of a densely knitted textile. This even though they were wearing tops and shorts and (except for foot socks) were barefoot.

None could have existed on that stage space without the others, and yet it was obviously vital that they move apart; breathe, as when they regarded one another from the four corners of the space. It was hearty. It was soulful, even sweet in some of its partnering. And the dancers’ unity, despite their disparate company affiliations, training, and origins, was and would remain extraordinary throughout the evening.

Lacunae was also a good deal of fun to watch and — thanks to Estonian composer Maarja Nuut’s fiddle, vocals, and electronica — to hear.

Archibald, the Cincinnati Ballet’s first female resident choreographer, is African-American and a graduate of the Alvin Ailey School. She has won choreography grants from Ailey and the Joffrey Ballet, has launched a hip-hop curriculum for Columbia/Barnard, and next season will have premieres at Tulsa Ballet and Ballet Nashville. Her new piece Shutter explored “how many layers of urban movement research can seamlessly fit into classical ballet.” She wanted to challenge why some cultures believed taking a picture could steal the subject’s soul and disrespect the spirit world, a question that she said encouraged self-reflection and creative exchange.

Shutter clicks accented the music, by Anna Thorvalsdottir, Seskamol, and Angus MacRae. And although the eight dancers rarely froze, the clicks helped isolate disparate instants, like lifts, for the audience’s delectation. Here again were strongly interconnected clusters, albeit with a more sculptural aspect. The dancers’ interlaced forms in the darkened light conjured up ancient statuary, such as the Elgin Marbles in negative hue. Too, there were suggestions, as two men shut each others’ mouths, of over-posed poses ... a nicely ironic touch. Dancers stood out more as individuals in this piece; Joseph A. Hernandez, dynamic and muscular, made striking work of an extended solo, and Sarah Cecilia, striking and slim, commanded all eyes whenever she moved.

In an apocalyptic series of lifts and strangled poses, it appeared that the worst fears of ancient peoples about the capture of spirits had been realized. Interesting as well, how that assemblage of catastrophic moves called to mind moments from Picasso’s Guernica. Shutter’s inexorable buildup of intensity was most compelling.

Seiwert’s new ballet, Unlocking/Elpis, challenged her to create a narrative work, rather than simply responding instinctively to music. The Elpis myth, attached to the Pandora myth, is too complex to render here except to note that Elpis is the strongest and meanest of all the evils Pandora unleashes upon the world, and here, she was one icy character, beautifully played by Kelsey McFalls, a strong ballet dancer working on point, like all except one of the women (Sarah Cecilia danced in soft slippers; the differences were practically unnoticeable because Cecilia is classically trained.) The myth was set to moody live music played on the spot by the composer, violist Christen Lien, who hauntingly narrated the libretto (and did promotional graphics for the show, too – can you say “polymath”?). She was garbed in black, as were the company of dancers, by Christine Darch, who did all the costumes for the show, just as Matthew Antaky did all the immaculate lighting.

For the record, here are the other dancers, every one of them exemplary: Alysia Chang, Aidan DeYoung, Matthew Doolin, Beth Ann Maslinoff and Austin Meiteen.

Seiwert is well-cast as the leader of Imagery. Unlocking/Elpis is a beautifully calibrated, controlled, yet extravagantly wide-ranging tour de force, and one falls readily into the grip of the narrative, the insistent hold of McFalls, and the havoc that swirls around the stage as the company reacts to the new force in their midst. Not surprisingly, the crowd went wild.

Seiwert is leaving the Bay Area to become artistic director of the Sacramento Ballet, where she danced before joining Smuin Ballet. But luckily, her Sketch series will continue through an innovative scheme to appoint artistic fellows. The first, to lead the Sketch group for the 2019 season, is dancer and choreographer Ben Needham-Wood, Smuin Ballet’s rehearsal assistant. He will be mentored by Seiwert and Annika Presley, Imagery’s managing director, and will choreograph two pieces for Sketch. That the Sketch group will be sustained in Seiwert’s absence is great news. Looking to the future, the success of Imagery and Sketch leading to new opportunities for gifted women choreographers would be the best news of all.

American Ballet Theater makes the next move in righting a power imbalance; time for S.F. Ballet to step up.

Ballet star-turned-choreographer set to premiere her first full-length ballet at the Cowell Theater, before taking it on the road.