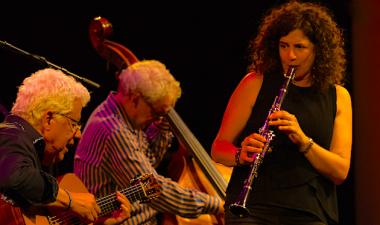 Growing up in Tel Aviv, Anat Cohen started absorbing standards from the Brazilian Songbook without having any idea of the music’s origins. As an aspiring clarinetist and tenor saxophonist attending the vaunted jazz program at the Thelma Yellin High School of the Arts, she learned to play classic songs by Milton Nascimento and Gilberto Gil from recordings by Israeli pop star Matti Caspi, with lyrics translated from Portuguese into Hebrew. It wasn’t until she moved to the U.S. in 1996 to study at Boston’s Berklee College of Music that she discovered the source of the songs, a revelation that sparked her ongoing, career-defining engagement with Brazilian music.

While establishing herself as one of the most celebrated jazz musicians of the era — she’s on the cover of the current issue of Down Beat, jazz’s oldest and most widely read periodical — Cohen has recorded half a dozen albums exploring various strands of Brazilian music, from the foundational instrumental style choro to the supremely sophisticated Brazilian jazz compositions of Moacir Santos.

She hasn’t recorded yet with Trio da Paz, but judging by the pleasure emanating from the Dinkelspiel Auditorium stage on Saturday night, a collaboration is overdue. Performing as part of the Stanford Jazz Festival, the Brazilian trio opened the concert with a Dorival Caymmi samba and a marvelously constructed original by guitarist Romero Lubambo combining his love of Bach with the northeastern baião rhythm.

Like his bandmates, bassist Nilson Matta and drummer Duduka da Fonseca, Lubambo has thrived in New York for more than three decades. While they’ve toured and recorded widely as Trio da Paz, North America’s definitive samba jazz ensemble, the players all work extensively in other settings (Lubambo is a longtime collaborator with vocalist Dianne Reeves, with whom he performs Sunday as part of San José Jazz’s Summer Fest).

Cohen joined the trio on soprano sax for da Fonseca’s gorgeous “Dona Maria,” playing the melody in unison with Lubambo’s nylon-string guitar. With its dramatic structure and coruscating line, the piece sounds like an Afro-samba from the songbook of Baden Powell.

The concert’s centerpiece exemplified why Cohen has dominated the clarinetist-of-the-year category in jazz polls for the past decade. On Hermeto Pascoal’s spritely “Chorinho Pra Ele” and Jimmy Rowles’s exquisite pastoral “The Peacocks,” her liquid tone seems to levitate weightlessly over the trio’s buoyant churn. They closed the concert by dedicating it to the recently departed bossa nova patriarch João Gilberto, who’s ineffable pulse was woven throughout the evening.

While Brazilian music is central to Cohen’s artistic identity, she’s a multifarious creative force. As part of the Jazz at Lesher series she performs two concerts Saturday with her Tentet directed by Oded Lev-Ari, a talent-laden ensemble that just released a stellar second album Triple Helix (Anzic).

The renowned keyboardist learned from the best. He’s in the Bay Areas for a variety of gigs, including dates with red-hot singer Veronica Swift.