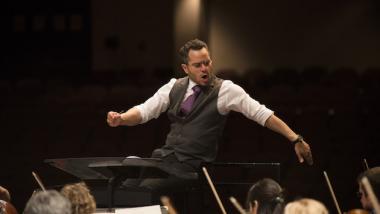 Some of Grams’s inconsistency may have stemmed from his chosen repertoire. According to Symphony staff, each of the conductor candidates (Grams is the third of five) chooses his or her own repertoire, with the exception of the piano concerto. The only requirement is that at least one of the pieces needs to be “modern,” i.e., written after 1900. The previous two candidates chose works written within the last 20 years, but Grams played it safe by selecting Rachmaninoff’s Symphonic Dances, which hails from 1940 but is unabashedly Romantic. Grams’ other selections were Berlioz’s rarely performed King Lear overture and an orchestrated version of Debussy’s piano classic, “Clair de Lune.”

The choice of the King Lear overture was particularly unfortunate. In introducing the piece, Grams said that it “gets programmed rarely — and you’re about to find out why.” And indeed, there isn’t much to it. Grams asserted that the music “sounds like it would be from a mad king,” but to contemporary ears, it sounds pretty tame, almost like a Rossini overture. The musicians played well, and Grams conducted solidly, but there was no kindling to ignite.

In contrast, the subsequent Ravel concerto (the one for two hands) was crackling within seconds. Goodyear is a self-effacing pianist who plays it straight, but the sounds coming from his fingers are incendiary. His technique is dazzling, his rhythmic sense is infallible, and the speed with which he traverses the fingerboard is astonishing.

The first movement of Ravel’s concerto sounds like a French version of Gershwin’s Rhapsody in Blue, with some nearly identical phrases. Goodyear slid right into his part, balancing well with the orchestra while bringing out the syncopation. He likewise eased into the second movement, playing his simple but evocative part with great sensitivity. His playing was so peaceful and tranquil that it got everyone’s attention, and a sustained hush descended on the audience.

Goodyear broke the silence with a relentless perpetuum mobile in the Vivace finale. He played with tremendous energy, but was always in control and delightfully expressive. Grams and the orchestra matched him note for note, including a torrid bassoon solo.

After intermission, the attention was once again on Grams, who had arranged the orchestra in a somewhat unusual pattern of first violins, cellos, and basses on stage right, with violas and second violins on stage left. The arrangement gave the orchestra a deeper sound, but it was often difficult to hear the violas.

The Symphonic Dances is one of Rachmaninoff’s best works and it’s hard to forget. The driving rhythms and descending triplets in the opening bars become etched in the brain as Rachmaninoff restates, develops, and expands upon them. Grams was precise in cueing entrances, and he paced the first movement exquisitely, the gradual build-up at the outset resolving into a thundering fortissimo.

Grams’s beat is easy to follow. His left and right hands function independently, allowing him to add expressive effects with his left. He used every square inch of the podium as he addressed the different sections of the orchestra.

Despite all that, Grams’s head often seemed to be buried in his score, detracting from full engagement with the orchestra. All the tempi and dynamics were there, but there were few sparks and not much forward momentum.

Thankfully, momentum arrived in the finale. Here Rachmaninoff displays his skill as an orchestrator, and the musicians proved equal to the task, negotiating the tricky rhythms and rapidly changing instrumentation with ease. Grams led them flawlessly and spiritedly.

Another odd repertoire choice ended the concert as a kind of encore: André Caplet’s orchestration of Debussy’s beloved piano piece, “Clair de Lune” (Moonlight). Here Grams was in his wheelhouse, evoking lush sound from the orchestra with grace and confidence.

A star turn by a young violinist, and strong conducting from guest Mei-Ann Chen started the new year off right in at Weill Hall.