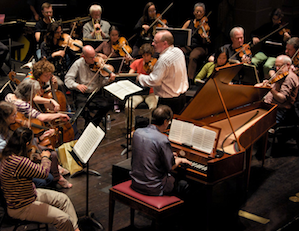 Anniversary commemorations have long been a favorite impetus for concert programming. Although 2014 is still young, such offerings are well under way. One of this year’s honorees, C.P.E. Bach (born 1714), was the inspiration for Philharmonia Baroque Orchestra’s (PBO) Saturday evening performance at First Congregational Church in Berkeley.

PBO played those passages, the plentiful sighing figures, and the stern dotted rhythms with precision. The concert also brought one of world’s foremost performer-scholars, Robert Levin, back to the Bay Area stage. C.P.E. Bach’s Keyboard Concerto in B Minor gave him opportunity for technical display early on, via scales, arpeggios, and other figurations in fast notes. Levin’s simple black outfit, however, aligned with both his playing style and his onstage demeanor — engaged yet collected. He responded physically to some of the more urgent rhythmic patterns, but overall his gesture and comportment were measured. The other players did not disappoint. PBO’s interludes and interjections were exceptionally clean, and the balance between harpsichord and orchestra, at both softer and louder moments, was impressive.

As the program notes suggested, it is easy to overemphasize sturm und drang qualities in C.P.E. Bach’s music. While PBO’s programming included a fair share of bizarre harmonic shifts and unexpected chromatic inflections, there was no lack of graceful galant lines or downright playfulness. The Concerto for Fortepiano and Harpsichord in E-flat, which brought a second acclaimed keyboardist, Ya-Fei Chuang (who happens to be Levin’s wife), to the stage, was littered with both. Chuang added her own lyrical skills to the mix, but the duet was especially delightful when they teamed up for both intimate and more virtuosic passages.

Doubtless the audience expected to stand on more familiar formal and stylistic footing with Haydn’s Symphony No. 68 in B-flat, the final piece. Yet Haydn’s music always brings something unexpected, no matter which of his generic “children” is on offer. The opening Vivace featured a lithe texture and a compact sonata exposition. Given its efficiency, conductor Nicholas McGegan’s decision to take both sets of marked repeats on the opening movement was a welcome one. The satisfying four-bar phrases of the minuet led into a trio filled with dynamic and textural contrasts. Those were more extreme, however, in the long Adagio, in which McGegan’s gestures suggested a particular concern for maintaining the intensity of the violins’ piano sound as an effective opposite for the periodic forte interjections of the full orchestra.

The violins played with delicacy later matched by Andrew Schwartz’s simple, yet poignant (if short) bassoon solo. He played with stable, clear tone. The bassoon’s brief shining moment proved merely a prelude of things to come, as the closing Presto featured a remarkable dialogue between bassoons and strings. Schwartz and Kate Van Orden switched deftly between upper-register work and strong bass notes. PBO handled the comedic ending with care: Haydn draws down the sound to nothing but then restarts the orchestra with rapid exchanges of fragments of the opening theme between seven soloists. He quickly ratchets the texture back up to close with a suitable bang. More than a few patrons rose to their feet to sustain a loud, well-deserved ovation.

The collection of microphones on stage surprisingly didn’t seem a visual interference by the end of the evening. Hopefully their presence meant that a fine recording was also made. If so, it would bear material witness to the world-class music-making that the audience was privileged to experience.