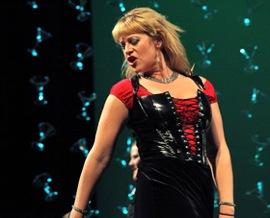 Few operas have been worked over as much as Bizet's Carmen. At the San Francisco Opera, 167 performances make it the fourth most popular opera (after La bohème, Madama Butterfly, and Tosca), and every company in the area has tried to produce it, sometimes in a different directorial — or even musical — concept.

In the East Bay, where Berkeley West Edge Opera's Carmen Fixation opened Saturday night, memories are still fresh of what was then just Berkeley Opera's English-language version by David Scott Marley, and Festival Opera's outstanding production of Peter Brook's La Tragédie de Carmen, both a decade ago. And just last week, 3-D Carmen from Covent Garden opened in movie theaters. There have been a dozen film versions, from Cecil B. DeMille's in 1915 to Carmen: A Hip Hopera.

What's different about the Berkeley Carmen? Company Music Director Jonathan Khuner described what it is not in his collaboration with Artistic Director Mark Streshinsky:

Mark's idea was to excise the "production numbers" and concentrate entirely on the obsessions of the principal actors. We would slice the icing off the cake ... no soldier drill, no cute children's chorus, no happy smugglers, no gypsy folk dances, no quaint tavern owner, no bullfight parade.

So that's what ain't we got, what's left then? "Bizet's marvelous narrative music ... the arias duets, and ensembles that tell the intimate story of people caught in the grip of passions they can't even explain to themselves," says Khuner.

I had a different experience. Above all and almost alone, there is Buffy Baggott's superb, self-assured Carmen, with a great big velvety voice, passion galore, sultry as all get-out, and even the expert use of a bullwhip. It sounds as if it might have been too much, but the great thing about Baggott is that she is the complete package, every part in proportion, nothing excessive. Simply, she is Carmen.

Michael Taylor's Escamillo was fine, but the rest of the cast was disappointing at the opening performance. There was no "grip of passions" in Pedro Rodelas' Jose; the voice sounded uncertain (perhaps he and I shared bronchitis). Jillian Khuner's Micaela was vocally okay, but characterization of the "simple girl from the provinces" was way too mature and unconvincing. Stage presence in the minor roles was iffy at best.

Robert Ashens conducted the hardworking orchestra on one of its better nights, with a few instances of unsteady tempos and balances that didn't always work.

The structure of the evening was strange. An amusing 10-minute precurtain speech by Streshinsky was followed by a half-hour first act, intermission of the same length, and then an hour-long second act. Unlike what you'd expect from that, the short first act was slow and unsteady, the second act more like what you'd expect from Streshinsky, one of the finest young stage directors around.

The reworking of the piece opens with a brief pantomime scene showing how Jose (not called a Don here) killed a man for cheating at cards — something neglected in "conventional" productions. It doesn't seem to add much to the work. What follows takes place on yet another great Streshinsky unit set, called Club Zingara, with a huge backdrop of glasses. The director even manages to bring the bullfight into the club through a telecast.

Here's an idea for another "different" Carmen production: how about a one-woman show, with Baggott?