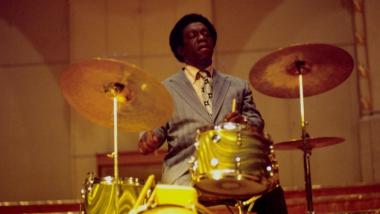 Art Blakey’s message continues to reverberate nearly three decades after his death at the age of 71. A foundational figure in modern jazz, the protean, Pittsburgh-raised drummer first made his mark in Billy Eckstine’s pioneering mid-1940s bebop big band. The under-documented ensemble brought together just about every horn player turning the jazz scene on its head, including Charlie Parker, Dizzy Gillespie, Fats Navarro, and Dexter Gordon.

Blakey truly found his calling a few years later with the Jazz Messengers, a combo he designed to showcase blazing young players and their compositions. Before Blakey, bandleaders with little intention of sharing the spotlight mostly hired young cats out of economic necessity. Blakey not only promoted the rising generation, he eagerly anticipated them leaving the nest so he could introduce the next flock.

sextet concluded the four-act Jazz at Lesher summer series, which in quality rivals the jazz offerings of any performing arts center in the region. Snide comments about the “Cultureblock” Tunnel aside, this Diablo Regional Arts Association-presented series has quietly given the lie to the anti-suburban snobbery that contends there’s no worthwhile culture east of the Caldecott.

A prolific artist who has long embraced Blakey’s self-appointed mission to nurture young talent, Peterson performed in the Jazz Messengers’ Two Drummer Big Band from 1983 until Blakey’s death. Aside from two substitutions, the Lesher combo featured the band from Peterson’s recent double album Legacy Alive: Volume Six at the Side Door (Onyx Records), a heavyweight roster built on the forcefully nimble bass work of Essiet Essiet (who, like the crackling Lynch, was a member of Blakey’s final band).

Tenor saxophonist Bill Pierce, whose four-year run with the Messengers bridged the iterations with Marsalis and Blanchard, played with the pliable, rounded tone and probing intelligence I remembered from his tenure with another epochal drummer, Tony Williams. With Berkeley High graduate Craig Handy on alto sax, the horns blended with precision and swaggering panache.

The only non-Messenger on stage was pianist Zaccai Curtis, 37, a stellar improviser who has followed the path favored by Blakey, graduating from Peterson sideman to an employer of the drummer (on a series of albums co-led with his younger brother, bassist Luques Curtis). The pianist sounded particularly crisp and articulate on trombonist Curtis Fuller’s “À la Mode,” a strolling arrangement of a modal theme with running commentary from the horns.

Blakey is often remembered for his power. If a player didn’t hit the bandstand with confidence he (it was usually he) would get steamrollered. But Jazz Messengers recordings capture working bands that play with Blakey’s exquisite dynamic and rhythmic control. Along with Horace Silver and Miles Davis, Blakey drove the evolution from bebop to hard bop, a sound marked by blues and gospel feeling and pronounced syncopations. No one was better than Blakey at bringing the band back in after a pause for a beat or two.

Peterson demonstrated his mastery of these hits throughout the set, with a particularly pregnant pause on Benny Golson’s “Along Came Betty” and a fine-grained version of Clare Fisher’s “Pensativa,” which featured some particularly beautiful trumpet work by Lynch. Another highlight was a feature for Handy, whose lustrous tone took on dozens of different shadings on a searing performance that started with “Everything Happens to Me,” swerved into “Acknowledgement” from Coltrane’s A Love Supreme and concluded with some honking blues.

Peterson closed the set with a thrilling workout on Juan Tizol’s “Caravan,” the title track of a 1963 Jazz Messengers album by the longest-serving and most celebrated version of the band. It’s a tune that arrangers love to wrap in exoticism, but drawing on the classic rendition, they didn’t add to the North African cadences of the original, delivering the rising and falling theme as Peterson’s crisp, snapping trap work propelled the unit. It sounded magnificent, and like they were just starting to burn.

The Many Faces of Summer Fest

Just dipping a toe in the musical waters of the San José jazz celebration is a full-immersion experience.

A new box set shines light on the saxophonist’s creative process within the context of his musical circle.