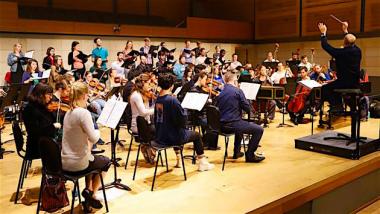 The American Bach Soloists’ annual summer Festival & Academy, which wrapped up its ninth year on Aug. 12, is an inspired and inspiriting event. While the public concerts may be and often are estimable, process finally matters more than product. For two weeks of intensive rehearsals and performances, student and recent graduate musicians join ABS professional stalwarts in a sustained act of mutual trust and admiration.

The pace and enlivening pressure create a collective heat of creation. Audiences can sense it before a note is sung — in the proud and often polished stage presence of the classily dressed participants. Everyone basks in the warmth of what’s already evident and what’s to come for these emerging artists. It’s a full-dress rehearsal for the future.

With ABS Artistic Director Jeffrey Thomas on the podium, Semele served as front-and-center showcase for the vocal soloists, who came and went from the ABS Academy chorus positioned behind the orchestra. The singers’ entrances and exits and mostly well-judged stage business of flirty sidelong glances, soul-searching looks and the occasional caress, provided just enough theatrical touches to flesh out the story.

Some of these star turns were shiny indeed, with soprano Arwen Myers leading the way as Semele. In aria after aria — four alone in Scene 2 of Act III — Myers used her light, clear and nimble voice to fashion a portrait of an innocent drawn into waters over her head. Early on, in sinuous and persuasive expression of her distress, she fretted in one of the libretto’s many adroit rhymes: “O Jove! In pity teach me which to choose/Incline me to comply, or help me to refuse!” By the end of the first act, she’d taken the plunge into “endless pleasure, endless love,” spilling out coy and playful trills.

Myers’s mastery of ornamented lines was put to the ultimate test in “Myself I shall adore,” in which she turned the fourth wall into a mirror to preen and admire herself. One silvery trill, decorated run and arpeggiated filigree followed another. “O sleep, why dost thou leave me” was tenderly shaped.

Not everything this young singer did came off quite so well. Myers’s voice lacked power and emphasis at times. And, understandably, she seemed to fade a little toward the end of a nearly three-hour evening in which she sang the most substantial role. But her musicality and demure demeanor remained a renewable pleasure.

Another winning soprano, in the smaller role of Iris, the goddess Juno’s messenger, sparkled brightly in “There from mortal cares retiring.” Emily Yocum Black joined knife-edged diction to some luscious phrasing. An accompanied recitative conjured the “forky stings” and “brazen wings” of two dragons vividly.

Bass Constantine Novotny stood out as Cadmus, King of Thebes. While most of his lines were in recitative, which he handed with clarity, expressiveness and a warm timbre, Novotny helped drive the pointed exchanges in one quartet as well.

The results with some of the other singers ranged from mixed to work-in-progress. Mezzo-soprano Silvie Jensen was a formidable presence as the jealously conniving Juno, all glittering calculation in her bejeweled headband and necklace. Her whiskey-voiced tone was arresting, but she struggled at the lower end of the register. Tenor Chase Henry Hopkins (who gave way to Patrick Kilbride at the second performance) had an appealing manner as the reluctantly seductive powerhouse Jupiter, but his voice tended to disappear mid-phrase. The alto Sam Siegel, as Athamas, was earnest but vocally porous as he explored the role. Mezzo Milena Gligić, as Ino, looked and sounded only partly smitten with him. Graham Bier, appropriately sleepy-faced-and-voiced as Somnus, drowsed amusingly through his two arias.

When this group of talented and developing singers joined forces in the chorus, Handel’s great facility for massed voices came shining through. Two choruses of priests, near the end of the final act, ran from succinct, astonished lines (“Oh, terror and astonishment”) to a closing exaltation of happiness.

Thomas presided, characteristically, with authority and sensitivity over an excellent orchestra. Everything from fluent string passagework to rolling thunder to delicate continuo was as it should be. The handsome musical drapery set off a fanciful tale of love-and-loss, brimming with the promising vitality, allure, and imperfections of youth.

The North American premiere of a 1734 Handel serenata is an interesting glimpse of the composer fulfilling his duties as unofficial court composer. Eyes and ears were on some of the strongly cast soloists.