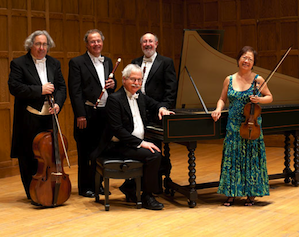 The Aulos Ensemble, a quintet of Baroque specialists, presented “An Evening in the Home of J.S. Bach” on Sunday evening in the home of C.F. Kohl — that is to say, the Kohl Mansion in Burlingame, as part of the Music at Kohl Mansion series.

We need not ponder whether the Bachs would actually have been likely to enjoy an evening of trio sonatas and quartets, or whether it would have featured this particular mix of composers (Bach himself; two of his more revered contemporaries, Vivaldi and Telemann; and two of Bach’s sons, C.P.E. and J.C.), or whether J.S. could have heard any of the music of young J.C., who composed little of note until a decade after his father’s death, or whether J.S. would have liked or appreciated it if he had. (Probably not.) Instead, let’s just enjoy the music.

And that we did. The members of the Aulos Ensemble are mostly gray-haired and a bit shaggy, and they play in a corresponding fashion. Their music-making is more than a bit shaggy — off notes and some muffing being inevitable on the Baroque instruments they play — with slackly fastened gut strings on the violin and cello, and a low pitch standard, both customary in historically informed practice. The overall effect was cool-toned and mellow, true chamber music appropriate for the confined space (well-filled with audience members) of the Kohl Mansion’s Great Hall. The sound would have been lost anywhere much larger.

Violinist Linda Quan stood in the center. Flutist Christopher Krueger, by her side, appeared to be nursing a cold, which didn’t stop him from playing with enthusiasm. Oboist Marc Schachman had the most mellow sound of the bunch, more typically for a Baroque oboist than would be the case for a modern one. Cellist Myron Lutzke and harpsichordist Arthur Haas, seated in the back, together provided the bass continuo. Although usually played by two or even three people, it counts as one musical line in Baroque practice. Thus the term trio sonata for pieces where Schachman was not playing and quartet for when he was.

The overall effect was cool-toned and mellow, true chamber music appropriate for the confined space.

The three works by the father’s generation, before intermission, conveyed their composers’ distinct personalities despite the similar instrumentations. A chamber concerto in G minor by Vivaldi, RV 107, had the lightest tone and the most intricate counterpoint, with typical Vivaldi “shuddering chords” at the end of the concluding Chaconne. A Bach trio sonata in G major, arranged from his organ sonata, BWV 525, was more stately and formal, with a quintessentially Bachian academic melody in the Adagio. Telemann’s Quartet in G Major from the first volume of his Tafelmusik expressed a glinting Telemann sound. It had less counterpoint and more exchanges of melody than the other works, and included large shifts of tempo within its movements. Aulos played these more as changes in style than in actual speed of the music, which was consistently rather fast.

Following intermission, the concert turned inward to the Bach family. First came selections from the Notebook for Anna Magdalena Bach, pieces that might or might not have been written by J.S. himself, including the famous Minuet in G and the Musette in D. These were arranged for the ensemble in a more modern style, allowing solo parts for both harpsichord and cello.

The Andantino … revealed the melodic and harmonic grace that shows what Mozart saw to praise in J.C. Bach’s music.

A trio sonata in G major by C.P.E. Bach came next. This is an early work of his, from his adolescence, before he had developed his distinctive style, so it was the blandest piece on the program. At least its early date means that the composer’s father could have heard it, though J.S. is said not to have been greatly impressed by C.P.E.’s compositions. The sonata is transitional in style, Baroque in some of its phrasing, and more Classical in its sonata format.

J.C. Bach’s contribution, however, was the real winner of the evening. Written much later in life than his brother’s piece was, it’s fully Classical in style and signals this by actually calling itself a Quintet in D Major, Op. 22, No. 1, in acknowledgment that the former continuo players have fully independent parts. Each instrument took the lead at times, which had been alien to continuo, and otherwise duplicated the lead or played supporting harmonies more often than offering a contrapuntal line. The Andantino, in particular — an aria for flute that includes much pizzicato accompaniment from violin and cello — revealed the melodic and harmonic grace that shows what Mozart saw to praise in J.C. Bach’s music and took in inspiration from him.

For an encore, the Aulos Ensemble offered the Noël provençal of the French composer Michel Corrette. Although contemporary with Bach, its quaintly modal line and the dronelike harmonies of the arrangement evoked the Renaissance.

Before the concert began, the audience filing into the hall was serenaded from the balcony with Christmas carols from the Honors Chorale of Mercy High School, on whose campus the mansion lies.