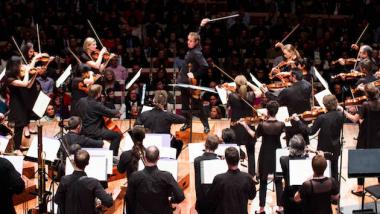 The Australian Chamber Orchestra came to Bing Concert Hall on Sunday for a Stanford Live concert determined to prove that Brahms and Mozart wrote the softest, most gentle and pillowy music imaginable.

This interpretation went with the grain for Mozart, at least for a quiet, unpretentious piano concerto like No. 12 in A major, K. 414, and certainly with Paul Lewis for soloist. Lewis played in a light and flowing manner, evolving into a hollow chiming in the slow movement. He showed himself a master at getting the antique and suitably Mozartean sound of a circa 1800 fortepiano out of a modern Steinway. Even in cadenzas which alternated heavier and lighter passages, Lewis minimized the contrast and poured out a smooth and even sound, condescending only to bring out the left-hand voice gently in some passages.

The orchestra of strings, oboes, and horns was similarly light, though not completely unvaried. Occasional bites in the attacks, little forte surges here and there, and a distinct sourness to the violas’ reply phrase in the second theme of the first movement gave texture to the music.

A string orchestra arrangement of Brahms’s String Sextet No. 2 in G major, Op. 36, was led by artistic director and lead violin Richard Tognetti in an unusual interpretation built entirely around the score’s dynamic markings. The result was a truly eccentric performance, one that felt as if it was recasting the meaning of Brahms.

Brahms marks the first theme of his first movement to be played piano to pianissimo throughout. That doesn’t usually come out as it did here: supernally hushed, so quiet and hesitant — and also rather slow — as to render it more an introduction than a main theme. Nor is a full string orchestra, even one of only 18 players, necessarily louder or bolder than the chamber ensemble Brahms wrote for. Where a single instrument can give a raw catgut sound, multiple players can render it smooth and elegant. Here it contracted rather than enlarged the impact.

Suddenly the orchestra burst out to greater power and speed with the first forte at the transition to the second theme, making that seem like the main event of the movement. After that came a series of vivid alternations between relatively loud and bold passages with entirely quiet and hushed ones.

The middle movements were equally strongly marked, with the jaunty trio sticking out like a jagged mountain in the calm sea of the Scherzo, and a contrapuntal section serving a similar function in the slow movement. This was all dictated by the dynamic markings, but it was not like any performance of this work I’d ever heard before.

The uncredited arrangement involved more than sticking orchestral section labels on the individual parts. At one point near the end of the first movement exposition, the arrangement reduces itself to soloists for a bit of variety. The third of the orchestra’s three cellists sometimes shares the second cello part with the double bass, and sometimes joins the other cellos in the first cello part, leaving the double bass to carry the second cello part alone.

The concert also offered a new work, co-commissioned by Stanford Live and heard here for the first time in the U.S., Movements (for us and them) by Samuel Adams, a busy young composer who’s been heard a lot locally. It’s constructed as a concerto grosso, with busily overlapping contrapuntal lines and frequent exchanges between a concertino ensemble of a string quartet and the larger ripieno group, though with frequent solo phrases from other members of the orchestra as well.

That must explain the “us and them” part of the title, but despite the word “movements,” this 18-minute work consists not of separate movements but of a series of sections of strongly contrasting energetic and restrained music, rather akin to the orchestra’s treatment of the first movement of the Brahms.

Adams builds his sound on open and secure but unresolved harmonic platforms, willing the melodic lines to turn outward rather than to conclude in cadences. Slower movements offer slinking melodies or oscillating solos over slow pulsating backgrounds. In faster ones, overlapping chittering phrases or contrapuntal lines build up tension into congested climaxes.

Whatever is going on in this music, it’s always interesting. Adams writes in the program notes as if he doesn’t plan out his compositions, but the result sounds like a composer who knows what he’s doing.

The Australian Chamber Orchestra, superb and often startling performs in what anything but an ordinary night of music-making.