A band of musical pirates commandeered the Downtown Independent LA on Saturday night in Los Angeles. Under the direction of composer and conductor Jack Curtis Dubowsky, a small ensemble contributed a new score for Douglas Fairbanks’s 1926 adventure film, The Black Pirate.

Dubowsky wrote this piece as a follow up to his previous score for a Fairbanks silent film, The Mark of Zorro. The Jack Curtis Dubowsky Ensemble specializes in performing alongside screenings of silent films, and they have a strong grip on the musical needs of the art form. They played the part well on Saturday. With some members dressed like pirates, the music was on point and infused the film with a modern vitality.

Dubowsky has a keen eye for the emotion of the underlying scene and his score contained both composed and improvised moments. The band consisted of drums, keyboard, double bass, and two particularly strong woodwind players.

The Black Pirate follows a scrappy Fairbanks as he attempts to avenge his father’s murder by a band of pirates. He infiltrates the pirate crew incognito and comedic adventures and mishaps play out over an hour and a half. The music shifted genre from scene to scene, adding a welcome change to moments of the film that at times taxed the modern attention span. 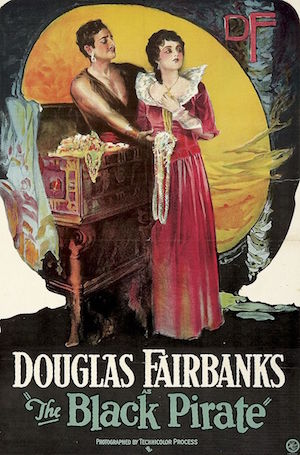 Dubowsky used his ensemble to smooth out these moments. The main musical ideas were in a standard 1920s style — intentionally camp but interesting. Lilting melodies invoked pirate sea shanties and gave a cheerful and upbeat color to the film.

But the score was most notable when it invited sounds out of abstract jazz and modern atonal harmony. The bass clarinet often intoned notes that formed dissonances against the rest of the ensemble’s upbeat pirate melodies, creating a darkness which the film otherwise lacked.

The music modulated between these melodies, modern dissonances, and improvisatory instrumental sound effects. It kept the music in a state of flux that paired nicely with the ebb and flow of the action on screen.

Dubowsky used his instruments to represent various characters in the film. The bass clarinet was a clear stand-in for Fairbanks himself, scuttling up and down the instrument’s range in moments where Fairbanks spoke on screen. The double bass represented various pirates, helping to flesh out the film’s comedy.

The score truly captured the film’s comedic voice. Fairbanks’s silent comedy is based in his muscular physicality. Unlike Chaplin’s comedy that depicts and mocks physical weakness, Fairbanks’s comedy comes from his impressive stunts. His acrobatic leaps through the air and swordplay are pulled off with comic aplomb. Dubowsky’s score celebrated and heightened that physicality.

The score often served to cue the audience’s laughter. The audience laughed particularly hard when an on-screen pirate scuttled up a rope ladder to the sound of a solitary double bass etching higher and higher.

The live music worked surprisingly well with the film. It did not take us out of the action and yet it was still noticeable. Dubowsky has a strong command for the style of silent films and their musical needs. The musicians in his ensemble played with a flexibility that only works in a small ensemble, and they reacted individually to minor developments on the screen. The woodwinds particularly stood out, providing most of the color for the sound. It was fascinating to watch both old and new art working in concert.

The Club Foot Orchestra seamlessly meshes music with film in a presentation of Fritz Lang's legendary silent movie Metropolis under a starry sky in Saratoga.