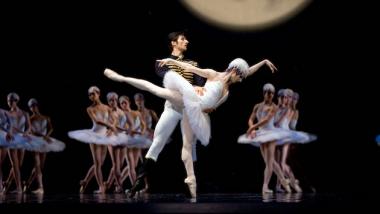 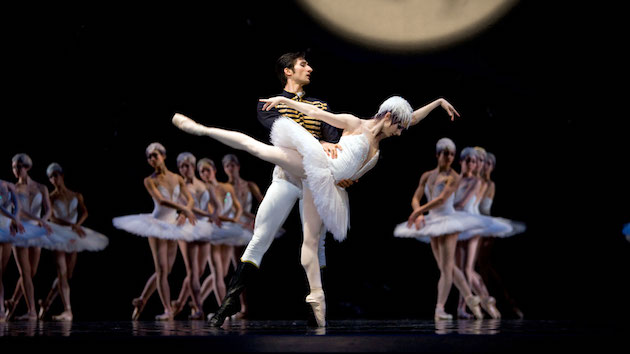 The ending was storybook — the prince and his princess surrounded by their colleagues and their boss, Helgi Tomasson, pelted with roses, taking bow after bow as the audience cheered and the golden curtain fell. With Saturday night’s superb performance of Swan Lake, Vanessa Zahorian and Davit Karapetyan — Odette-Odile and Prince Siegfried — closed a major chapter in their lives.

Soon they’ll be saying hello to Pennsylvania. The couple will lead a new ballet academy, something they’ve spoken of wanting to do. Zahorian, from Pennsylvania, received her initial training at Marcia Dale Wheary’s renowned Central Pennsylvania Youth Ballet before going on to study at the Kirov Academy in Virginia and in Russia.

Their romance began at work. Zahorian, a principal dancer since 2002, had joined the San Francisco Ballet in 1997. Karapetyan, an Armenian who joined as a principal dancer in 2005 from the Zurich Ballet, became one of her partners. Eventually, when they were sharing the title roles in Artistic Director Helgi Tomasson’s Romeo and Juliet, they began dating. One night, at the curtain call, Karapetyan proposed onstage, on one knee, with a ring, to his Juliet. Zahorian, as surprised as Karapetyan hoped she would be, said yes. The crowd went bonkers. And that, dear reader, is pretty much how it’s been. The couple, who wed in 2011, are sentimental favorites for reasons that go beyond sentiment. Their exceptional artistry and warmth, whether dancing together or, often, apart, will be missed.

Swan Lake is a great swan song, of course, allowing both leads to show their strengths independently as well as together. Independence is a quality that makes Zahorian a standout as a ballerina: the way she gets the most out of every role. Her training and capacity for hard work certainly have contributed to her fearlessness, but that sense of adventure — her joy, her respect for the music and choreography — is her gift, generously shared with the audience.

Karapetyan, an impeccable and giving partner, also brings remarkable buoyancy to his work. His Act II solo began with a grand jeté that looked as if it had been launched from the wings by a trampoline. His Prince Siegfried looked boyishly confused and tender, trying to outrun his mother’s (Katita Waldo) demand that he choose a wife, then finding Odette. The Prince and Odette looked a little nervous for the first minute of their pas de deux, then settled into a tender eloquence, propelling Odette through trusting turns, développés and arabesques, beautifully supported by Siegfried. Odette’s solo march forward, all passes and tiny jumps, spoke volumes about Zahorian’s strength and beauty. Music Director Martin West conducted, and the orchestra made Tchaikovsky sing, as did violinist Cordula Merks and cellist Eric Sung.

This is something of an exodus year for San Francisco Ballet. The brilliant Cuban-born principal dancer Lorena Feijoo, who signed on in 1999, will make a lower-key retirement farewell this week during a mixed bill. There are discernible rising stars already on board, and doubtless more to come. It was great fun to watch Esteban Hernandez, a corps dancer since 2013, leaping and spinning like a house afire (if said house was blessed with impeccable technique), in the first-act pas de trois, partnering the fine soloists Koto Ishihara and Lauren Strongin. It was a night of terrific dancing, notably in Act II, highlighted by an impeccably unified and graceful corps of swans. The Cygnets foursome — Isabella De Vivo, Jahna Frantziskonis, Julia Rowe, and Natasha Sheehan — were perkiness personified, and Dores André and Sasha De Sola were compellingly graceful as the Swan Maidens. For fine, well-muscled menace, Sean Orza’s Von Rothbart would be hard to beat.

In a flawless third act, set in the ballroom, Siegfried, feted on his birthday by an array of character dancers, betrays Odette’s love with the shameless Odile. Zahorian again amazed as Odette’s powerful alter ego. Bewitching in black, with eyes that flashed to every corner of the War Memorial Opera House, Odile dominated Siegfried body and soul, managing to look stunning, yet as predatory as a spider. The Black Swan pas de deux sealed Odette’s doom, as she appeared as a vision above the grand stairway before sinking out of sight. Zahorian’s Odile had no problem knocking off the traditional and amazing 32 fouettés, tossing in a few triples for good measure.

Among the wonderful character dancers were the supple Jennifer Stahl, as the Spanish Princess, in a pas de trois with Francisco Mungamba and Lonnie Weeks, and the return of André and De Sola, now as Czardas princesses, with James Sofranko and Hansuke Yamamoto.

The Lakeside finale, in this version choreographed by Tomasson, has a wonderful apotheosis in which we get to have our cake and eat it too. Siegfried and Odette plunge into the lake, but because of their love, they’re reborn as real people, in nonprincely, nonswanly garb. Siegfried’s got on a nice jacket, and Odette, a princess who’d been turned into a captive swan by Von Rothbart, rises in a pretty dress.

Thus begins their happy ending. Long may it continue.