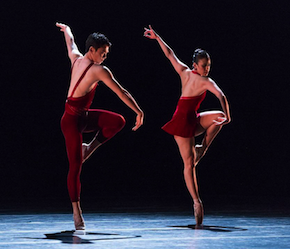 Ballet San Jose: A Gala as an Exception, and Exceptional

Galas don’t get no respect.

Among the culturati, ballet galas are often derided for the steady, boring parade of ballet clichés, the same old pas de deux — the term of art is “warhorses” — the milking of applause, and the notion that set pieces by guest artists, whipped off on demand for the sake of wall-to-wall publicity, has nothing to do with the excellence ballet companies are required to pursue.

Sigh. Some of this is even true. But how sad it would be if there were no exceptions to the old canards.

Be of good cheer: Ballet San Jose’s gala Saturday night at the Center for Performing Arts was an exceptionally brilliant exception. Yes, the artists were guests summoned in the name of José Manuel Carreño, the former American Ballet Theatre principal named artistic director last June. No, it doesn’t mean that Ballet San Jose will suddenly blossom into world-class-ness. However, it spoke well for the company’s future. For one thing, the evening, with Music Director George Daugherty conducting Symphony Silicon Valley, was beautifully paced.

It began by showcasing the engaging students of the company’s school in a Gala March, choreographed by Ballet San Jose School Principal Dalia Rawson, who danced with the company for nine years and was on the faculty for 12. All levels, from wee beginner to young adult, ran through their paces to Tchaikovsky’s ballroom music from Swan Lake, Act 3. Their poise, musicality and lack of pretension, coupled with fine technique at every level, was a pure pleasure, as were their brightly colored practice clothes and their smiles. It was good to see so many male students, too.

If you want to predict the success of a company, its school has a lot to tell you; this one now follows the American Ballet Theatre training curriculum. The other good omen was how unified by fine technique the Ballet San Jose artists (12 of them) looked in an excerpt from Glow-Stop, choreographed by Jorma Elo to Philip Glass. A premiere last spring, it relies for impact on clarity of gesture as well as footwork. The dancers, in ruby velvet on a darkened stage, cast a spell, wrapping the whole thing up with a final mystical trill of one dancer’s fingers.

As for the guests, the offerings ranged from the supple bedroom intimacies of New York City Ballet dancers Rebecca Krohn and Ask La Cour in After the Rain, Christopher Wheeldon’s romance set to Arvo Pärt, to the flashy Don Quixote pas de deux by Petipa, to Minkus, starring San Francisco Ballet’s Maria Kochetkova, flirting through multiple fouettes in a spectacular red tutu, and Taras Domitro, levitating like a rocket or spinning through flawless grandes pirouettes.

It would be impossible to pick the standout of the evening. Maybe Megan Fairchild and Daniel Ulbricht, on fire in George Balanchine’s Tarantella, or ABT’s stunning Gillian Murphy and the coltish, ardent Thomas Forster, in a perfect Black Swan pas de deux from Swan Lake. Or Ana Sophia Scheller and Gonzalo Garcia from the New York City Ballet, in Balanchine’s Tchaikovsky pas de deux, with its glamorous temps de poissons, those swooping fish dives, and bright circles of pique turns and grands jetes. Throughout, the dancers seemed to be having a terrific time with each other and the audience.

It would be impossible to pick the standout of the evening...Throughout, the dancers seemed to be having a terrific time with each other and the audience.

In the Petipa warhorse Le Corsaire, Joseph Gatti soared through the air, each leap looking like an individual trick, as the crowd went wild. Aldiarys Almeida charmed with tightly spun turns. They were the evening’s only unaffiliated guests.

What a shift of mood when the New York City Ballet’s Joaquin de Luz soloed in David Hernandez’ Five Variations on a Theme, set to a Bach violin concerto. The piece, with rapid shifts in direction and dynamics, was at once interior and, thanks to de Luz, vibrantly alive.

From Boston Ballet came Lorna Feijoo and Nelson Madrigal in the Act 2 pas de deux from Giselle; in their solo variations, his leaps were perfection, as were her tiny steps forward in passé on pointe.

Marcelo Gomes of ABT was the only dancer in two pas de deux, versatilely partnering the lovely Julie Kent in the balcony scene from Kenneth MacMillan’s Romeo and Juliet, set to Prokofiev, then turning all ring-a-ding-ding as he traded lifts and jabs with Misty Copeland in a wonderfully propulsive excerpt from Twyla Tharp’s Sinatra Suite.

Said Artistic Director Carreño onstage post-intermission, “I’m used to being back there,” gesturing behind the curtain. “From now on, I’ll be here.” He got a big hand. He deserved it.