It didn’t take violinist Daniel Hope long to pivot in the pandemic era. By the end of March, this “he’s everywhere” artist had launched [email protected], a series of livestreamed salons featuring fellow performers of all sorts, from pianist-composer Christoph Israel to singers, actor Sebastian Koch (Homeland), and even a pair of post horn players. 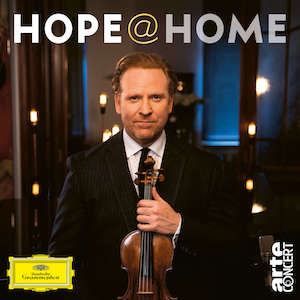 The “@Home” designation was literal at first, with Hope and his socially distanced guests making music at his own bespoke Belle Époque apartment in Berlin, smartly fitted out for high sound and video quality. Hope subsequently took his chamber-scale gatherings on tour, to locations including a Bavarian mountaintop. A number of the episodes are available on YouTube and on ARTE TV’s website.

As this series’ genial and generous host, Hope occasionally chats with his virtual audience, in soothing but purposeful tones. Freelance musicians have been hit especially hard during the Covid crisis, as he says. Hope adds that anything listeners can contribute to support musicians — or anyone else impacted by the pandemic — would be a much-needed blessing. The same could be said of the aptly named [email protected] Home itself, a welcome source of comfort for musicians and isolated audiences alike.

A new digital-only Deutsche Grammophon audio release captures the intimate, confiding character of the project. It’s no faint praise to say this collection of 21 selections is easy listening. Hope and his collaborators dare to be direct and open-hearted in a playlist that includes such über-standards as “Over the Rainbow,” “Summertime,” “Moon River,” and “America the Beautiful.”

Cuts like Rachmaninoff’s murmurous “Vocalise” and a Satie “Gnossienne” add to the predominantly pacific mood. Even the up-tempo numbers — a jazz refraction of Joseph Kosma’s “Autumn Leaves” or the title tune from the Greek film Never on Sunday — tend more toward suave, gentle percolations than rhythmic propulsions.

A good deal of the atmosphere owes to Hope’s own fiddling. Employing very little vibrato, he plays in a plainspoken, tenderhearted musical vernacular. The effect can be demurely elegant (in Schubert’s “An die Musik”), sweet without turning saccharine (“Vocalise”), vulnerable (Kurt Weill’s “Lost in the Stars”), languidly sensual (“Summertime”), and unexpectedly probing (an “America the Beautiful” that is closer to a wish for a more perfect union than a perfunctory assertion of national pride).

Hope has plenty of good company here, starting with pianist Israel’s self-effacing but sensitive contributions throughout. The superlative baritone Matthias Goerne checks in with Brahms’s “Wie rafft’ ich mich auf in die Nacht” (How I leapt up in the night ), the collection’s single most somber, gravelly voiced piece. When Joy Denalane and songwriter Max Herre team on the latter’s sung-and-spoken “Hunger,” a wistful nostalgic mood prevails.

Not everything comes off endearingly. A mashup of Manuel de Falla and Rudyard Kipling’s overweening poem “If —” is a notable misfire. But [email protected], overall, feels right for this fragile moment. In its embrace of the familiar and emotional frankness, it’s musical comfort food done well enough to nourish the soul.

An international ensemble tracks the multiple influences shaping music in the royal courts of Europe.

The musicians capture the high energy of Beethoven’s early compositions.