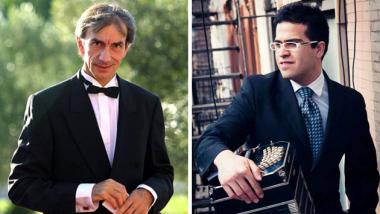 Seeing a bandoneón player in front of a symphony orchestra reminds one of the old joke about a kangaroo walking into a high-priced bar. The bartender says, "We don't get many kangaroos in here," to which the kangaroos replies, "With these prices, I can see why."

Fitting a squeeze-box Argentinian bandoneón – an essential element of tango dance-hall bands – into a classical-music milieu is a bit of a stretch. The two sound-worlds are so fundamentally different that it's hard to imagine how they could intersect. Nonetheless, star Argentinian bandoneónist J.P. Jofre and the Santa Rosa Symphony gave it a whirl on Sunday at Weill Hall in Rohnert Park, premiering a concerto for bandoneón and orchestra by Pablo Ortiz, an Argentinian professor of composition at UC Davis.

The results ranged from the transcendent to the perplexing. In the transcendent corner were a number of arresting passages, usually slow, that allowed the bandoneón's plangent sound to pierce through the orchestral haze. On the perplexing side were passages in which the bandoneón line seemed utterly random, unable to find a thematic center. In the middle of the ring was Jofre, who delivered all his many solos with technical mastery and sensitivity.

Jofre is a striking presence on the stage. Clad in a black leather jacket and wearing white-framed designer glasses, he put his right foot atop a piano stool and placed the bandoneón (essentially a large concertina) on his right knee. The buttons on the instrument activate reeds, which produce a distinctive, often melancholy sound, somewhere between an organ and a harmonica.

The opening movement of Ortiz's concerto steered clear of melancholy. Instead, Jofre opened by noodling rapid notes in his right hand while the orchestra stayed at arm's length. Later in the movement, a slow passage brought the bandoneón's distinctive sound to the fore. Here orchestra and instrument finally meshed.

That union continued in the second movement, which opened with shimmering strings and an evocative solo from Jofre that was both nostalgic and yearning. Things perked up considerably in the concluding movement, with its insistent dance beat, syncopation, and wonderful marimba solos. Jofre joined in with some spectacular playing and intricate passagework.

Things perked up in the [final] movement, with its insistent dance beat … Jofre joined in with some spectacular playing and intricate passagework.Called back to the stage by strong applause, Jofre offered a more traditional bandoneón solo for an encore, the Capricho Otoñal by Leopoldo Federico. The contrast with the concerto was striking. The sound was louder, the melody more tender, and the notes more connected, almost slurred. The two pieces did, however, share the same pervasive melancholy that seems inseparable from the instrument's sound.

The remainder of the concert was far more upbeat, from an unexpected preconcert viola solo to the rousing finale of Brahms' Second Symphony. The viola soloist was Aimee Gruen, a member of the Symphony's youth orchestra, who played a selection from Ernest Bloch's Suite Hebraic as part of a fundraising effort for the youth orchestra's upcoming tour of China.

The adult version of the orchestra weighed in next with a sparkling reading of the Danzón No. 2 by Arturo Márquez.  Conductor Bruno Ferrandis held everyone together, although at times his conducting seemed a bit frantic.

The Brahms Symphony No. 2, played after intermission, is not the least bit frantic. Here Ferrandis allowed the majestic themes to rise and fall at a leisurely pace. The opening movement featured outstanding French horn solos by principal Meredith Brown, complemented by a lush sound from the strings.

You expect more rhythmic contrast from the third movement, but again the pace was leisurely. Presto sections verged on Allegro, and the syncopations, while well played, didn't really pop. The fourth began more energetically, with Ferrandis picking up the pace. The ensemble was meticulous, the dynamics well controlled, the drive to the end relentless.