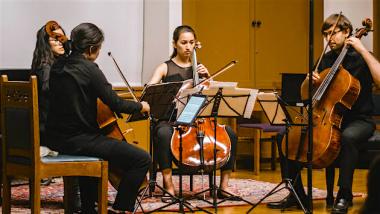 This world always needs brave people with courage to resist the mainstream, people who march to the beat of their own drums. The Polish composer Grażyna Bacewicz (d. 1969) was precisely such a soul. She was a female composer working in a deeply patriarchal time; she also made art in a Soviet country when doing so was less than legal.

This past weekend, Oct. 18–19, Bard Music West performed three programs as part of a festival to illuminate her work. Founded by pianist Allegra Chapman and cellist Laura Gaynon, the organization presents an annual festival that endeavors to make 20th-century music relatable, in part by providing adequate context about the life and work of a single composer. On Saturday evening at Noe Valley Ministry, these curators certainly succeeded with their third concert in this year’s offering. It was “Evolution and Persistence: Bacewicz and Her Legacy.” With works by Bacewicz and other composers, the performers and passionate festival staff ensured that Bacewicz’s legacy continues to burn brightly.

This long program included three works that Bacewicz herself composed. She wrote all three in the last five years of her life. The first, her Quartet for Four Cellos, included the event’s vivacious MC, Mosa Tsay. It was rife with aggressive, percussive articulations that made me worry for the health and safety of the musicians’ bows.

This program was partly inspired by the Warsaw Autumn festival, an international fête for contemporary music. In the 1950s, this festival enabled Polish composers including Bacewicz to hear music by Western composers. Alban Berg numbered among these Western influences. Clarinetist Bill Kalinkos and pianist Michael Smith performed Berg’s freely atonal Four Pieces for Clarinet and Piano. Written in 1913, this was the earliest work on the program, and its phrases sounded almost classical in comparison with the other works.

A younger composer created the evening’s gem. Agata Zubel extracted her Cadenza from a larger work and developed it into a solo piece for violin. Despite the piece’s fierce technical challenges and relentless microtonality, violinist YuEun Kim gracefully dominated this performance. She was arguably the evening’s brightest star.

A program of Polish music could hardly avoid Witold Lutosławski’s oeuvre. Two of his pieces were performed on Saturday. Kalinkos and Smith again collaborated in his Dance Preludes for Clarinet and Piano. Written during Soviet times, the composer called these dances a “farewell to folk music.” But they sounded folksy indeed to me.

Additionally, soprano Sara LeMesh joined Smith to sing Lutosławksi’s “I’m not expecting anybody” (“Nie oczekuję dziś nikogo”). Apparently, another version of this tune was performed earlier in the festival. In this jazzy version, LeMesh was audacious yet agile, commanding yet sensitive. I would have gladly listened to her voice all night.

By revealing that Bacewicz’s work is playful and mysterious, inspiring and unique, Bard Music West certainly helped to demonstrate her importance and resonance. But the festival’s exuberant, dedicated staff are also ensuring that Bard Music West forges a legacy of its own. Not unlike Bacewicz’s idiosyncratic musical voice, this festival defies pretentious norms so prevalent in modern performance practice. As surely as my laptop now proudly displays the sticker they gave me of Bacewicz, I look forward to returning to hear Bard Music West’s 2020 offering.

Two contemporary composers obliterate preconceptions about music and the objects – and people – making it.

The small music festival promises to make a big impression in 2019.