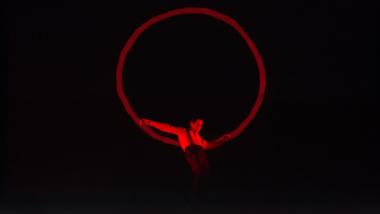 Baryshnikov Delivers a Thrilling Letter to a Man

The exploration of Vaslav Nijinsky’s art and madness known as Letter to a Man, created by Mikhail Baryshnikov, the sole performer, and Robert Wilson, is a stunner. To be sure, it’s a slow stunner, checking in at 70 solid minutes and bereft of the kind of dancing Baryshnikov, 68, did at his peak of renown. But what it has is far greater than what it hasn’t.

For one thing, it has the director Robert Wilson, whose Einstein on the Beach is a match for the pacing and repetition, the propulsive genius, of Letter to a Man. Admittedly, Einstein’s impact — Philip Glass? Game over — is greater than this new piece, commissioned in part by Cal Performances, which presented it over the weekend at Zellerbach Hall. But both works leave one with the sensation of approaching the lip of the precipice, pausing, analyzing it, thinking things over, and plunging in, full-throttle.

And then there’s Baryshnikov. Since retiring from ballet, he’s been more active than ever, investigating — notably with Mark Morris, with whom he created White Oak Dance, and in Letter with the assistance of legendary postmodernist Lucinda Childs — what he can still do and what the art form can become. He has his eponymous art center in New York, has collaborated with varying success on several theater pieces that suit his still-compelling movement style and capabilities. To many balletomanes, Baryshnikov is one of the Big Three male dancers. The other two are Rudolf Nureyev — and Vaslav Nijinsky.

But to our story. In 1945, Nijinsky, who had become increasingly unstable after 1917 and in and out of mental institutions, experienced periods of increased lucidity, according to his wife, Romola. Nijinsky, who was to die in 1950, spoke more intently and more volubly than he had in many years. His diaries included imaginary correspondence with the Ballet Russe impresario Serge Diaghilev, Nijinsky’s mentor and former lover, dead since 1929. Nijinsky’s marriage to Romola seems to have led to his dismissal from the Ballet Russe and his spurning by Serge Diaghilev, which broke his heart as well as his tenuous sanity. (There are various historical takes on the nuances of their affair and their breakup, and there is a sort of he-said, he-said within the piece.) It is the sense of recollection, of rejections and regrets and psychosexual torment, as well as Nijinsky’s passion to reconcile his life and work with his spiritual place in the firmament, that forms the libretto for this extraordinary piece of theater and movement, music (culled by music producer Hal Willner from songs of many eras by many creators) and noise, lights and explosions, and even Nijinsky’s own sketches — often, eyes — which expand circularly into all-obscuring scribbles.

Baryshnikov enacts Nijinsky eloquently, even sitting in a chair. Standing, he sometimes seems to float, his arms as boneless as he wants them to be, whenever he wants them to be, his entire torso eloquent and seemingly endlessly pliant (Nijinsky, after all, was the Faun in Afternoon of a Faun, which he choreographed as well). When Nijinsky rises from his chair (sometimes it’s an inverted chair, this being, after all, a theater piece) his tailcoat makes an elegant accent. Sometimes he bends rather stiffly, like a puppet, and not unlike Petrouchka, the role Nijinsky created in 1911 in the Michel Fokine ballet.

Nijinsky appears throughout in somber variants of black and white (tails, suspenders, black trousers and white shirt, all by Jacques Reynaud) rather than motley, but the link is unmistakable, especially as Baryshnikov flips those gloved hands through the classic Petrouchka gestures. (Yes, Baryshnikov used to dance Petrouchka. Need you ask?)

We rarely hear Baryshnikov’s Nijinsky speak; his voice, in Russian and English, is usually recorded, as is that of a female (perhaps Childs; uncredited, but plausible), and there are English supertitles, reiterating tortured questions about man and God, and whether Nijinsky is Christ or a simple man. The sets are simple yet complex, and sometimes weird; a barred window has the shape of a church window; a musing about youthful sexual adventures with “tarts” in Paris has paper flowers as backdrops and a little paper-doll girl who barks as her head flips around. There are lovely moments in settings of austere countryside; others in which Nijinsky arms himself with slender branches as whips. And there is a slide of a dead soldier, a reference, perhaps, to the time Nijinsky was caught, in 1905, in an anti-Czarist uprising in which he was hurt, but others were killed. “I know about war,” says Nijinsky disarmingly: “I’ve fought with my mother-in-law.”

Which leads to the question, would Letter to a Man be less spot-on had a mere mortal taken the role? Given the connections any dance lover would make between these two towering figures, the answer must be of course. And besides, Baryshnikov would have never bothered. He and Wilson, incidentally, are cocredited for direction, set design, and lighting concept.

And then there’s the intricate theatricality of the entire piece. This was made for legends. The introductory music as the audience is settling in is pure (or maybe not-so-pure) vaudeville and post-vaudeville: Sophie Tucker, Baby Snooks, George Gershwin, Stephen Foster, and on and on. The end of Letter to a Man takes place on a teeny-tiny stage within the stage, the theater of our — and Nijinsky’s — imaginings, with the stereotypical red velvet curtains, the gilded proscenium arch. Clearly, it’s where Nijinsky, delusional and describing to Diaghilev how successful he is, how busy he is making new ballets and presenting new shows, feels declaratively at home. And we can also see how perfectly, in this depiction of defiance amid despair, Baryshnikov inhabits that same space. The ultimate gift of Letter to a Man is that brief, tantalizing moment when the broken man and the whole man are seamlessly one.