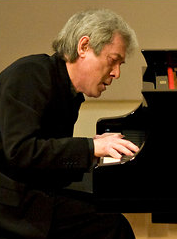 You can’t always depend on a great performance from a great pianist. Everyone has an off day. Dmitri Alexeev’s concert at Le Petit Trianon, presented by the Steinway Society of the Bay Area, was a disappointment, however, because of a lack of interpretive judgement. Though his repertoire featured eminently loveable Romantic composers — Schumann, Wagner, Schubert, Liszt, and Chopin — Alexeev showed little sympathy for their musical thought.

The opening of the program did not bode well. Alexeev’s reading of Schumann’s Arabeske, Op. 18 — one of Schumann’s most poetic and tender creations — was bland, inarticulate, and singularly inflexible. It was a harbinger of almost everything that was to follow, except for one component: the volume. Alexeev cranked up the decibel level decisively in Schumann’s Sonata No. 1, Op. 11 and, for the rest of the evening, turned it down only on rare occasions.

Schumann’s sprawling, kaleidoscopic sonata is nearly unmanageable for many a pianist, and it posed an insurmountable challenge to Alexeev as well, in spite of the fact that he shortened the first movement by not repeating the exposition. The brief slow movement, titled “Aria,” provided a respite from Alexeev’s brutally loud and grossly over-pedaled performance.

For those who heard Alexeev’s bombastic rendition and who are not quite familiar with the score: The third movement of the Sonata, “Scherzo e Intermezzo,” is, in fact, impulsively volatile, with biting accents, and mostly soft. There is no fortissimo indication until the end of the first page, and even then for four measures only. And the next fortissimo does not appear until the first few bars of the polonaise-like Intermezzo.

In the finale, abrupt contrasts between sharp staccato and smooth legato articulations contribute greatly to the impetuosity of the movement. Unfortunately, most of the staccato chords and single notes were smothered by Alexeev’s unremitting pedaling.

Alexeev cranked up the decibel level decisively in Schumann’s Sonata No. 1 and, for the rest of the evening, turned it down only on rare occasions.

The second half of the program included a selection of Franz Liszt’s piano transcriptions of opera scenes and songs by Wagner, Schubert, Chopin, and Liszt himself. Those were followed by a couple of Chopin’s mazurkas. They all received an equally ponderous, lead-footed treatment, with occasional quiet reprieves here and there.

I would like to briefly mention only one piece from that group: Liszt’s transcription of Chopin’s song “My Darling” (often translated as “My Joys”). When well-played, this transcription can make you cry. While I was listening to Alexeev’s aggressive, two-fisted delivery, all I wanted was to fight back.

Even Alexeev’s infrequent lyrical retreats were marred by his curious manner of presenting each melodic phrase by forcefully punching out the first melodic note, regardless whether it fell on an upbeat or downbeat.

The program concluded with Chopin’s Polonaise in A-flat Major, Op. 53, “Heroique.” Here Alexeev’s steely banging reached its apogee. Just when I thought that it would be impossible to play any louder, he somehow managed to pump up the volume further. Apparently, though, that was exactly what the audience wanted to hear. A thunderous standing ovation ensued.

For an encore, Alexeev chose Chopin’s infinitely sad Mazurka in F minor, Op. 63 No. 2. It began with a lingering, heart-rending dissonance in the first two bars and came to a whispering conclusion in the last two. These four bars were Alexeev’s best music making of the entire concert. I wish there had been more of it.