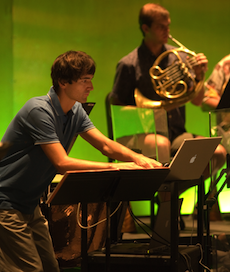 Walking around Civic Center on a weekend night, it used to be easy to tell who is going to Davies Symphony Hall and who is going to a rock concert or rave at the Bill Graham Auditorium. Now those lines are beginning to blur.

DJ and Composer Mason Bates has been the featured living composer at the San Francisco Symphony for the past couple of years as the orchestra uses more technology in its concerts, from electronic instruments to video projects. The 37-year-old Bates was also recently appointed to the composition faculty of the San Francisco Conservatory of Music, as it too aims to innovate in music in addition to conserve traditions.

Bates’ Alternative Energy is a programmatic work with four continuous movements that tell a story of energy: from steam-powered Industrial Revolution factories to futuristic nuclear power plants to a deeper kind of spiritual energy. I first heard this piece at the Cabrillo Festival of Contemporary Music a year ago, where I was wowed by the integration of electronic sound effects and the orchestra. On Friday night, the effect wasn’t as mesmerizing because of the setup of the speakers. At Cabrillo, even though the concert took place in a gym, the placement of the speakers surrounded the audience in close quarters, creating a magical, immersive experience. At Davies Hall the speakers were on stage and sounded a bit muffled, not quite loud enough. If the symphony is committed to playing more of this kind of music it needs to install a high-quality surround sound system in the entire hall (Meyer Labs in Berkeley has an amazing system).

On the other hand, that idea almost defeats the purpose of having a traditional acoustic orchestra. Classical musicians take pride in not having to use mics and speakers. But the identity and culture of the orchestra is gradually changing.

Bates’ Alternative Energy is a programmatic work with four continuous movements that tell a story of energy.

Alternative Energy pops, tinkles, and hisses with jagged mechanical beats at Bates’ typical cool Andante moderato pace. Various sections of the orchestra take turns reflecting these rhythms, locking into the metronomically equal divisions of the beat in a colorful array of sounds. The composer sits at a Macbook next to the timpani, triggering prerecorded altered sound samples in rhythm like a regular member of the orchestra. Meanwhile the strings get long, soulful melodies that feel like the accompaniment; the rhythmic churning is the main point of interest. A fiddle-style violin solo was well played by Associate Concertmaster Nadya Tichman but sounded dainty in the overall mix. Perhaps she should have been amplified to compete in volume and timbre on the same level of the electronics. Instead, the electronics were simply turned down, which took away from their dazzle. Overall, though, the performance was effective and received an enthusiastic reception.

Classical musicians take pride in not having to use mics and speakers. But the identity and culture of the orchestra is gradually changing.

The snare drum roll that started the concert almost made me spring up and stand for the national anthem (it’s close to the beginning of the season, after all). But it was the dramatic beginning to Rossini’s Thieving Magpie, not The Star- Spangled Banner. Michael Tilson Thomas led a majestic and poised rendition of the introduction, yielding to a more playful Allegro theme. The overture featured some great examples of the “Rossini Crescendo” in which a quick figure is played over and over while rising in volume, speed, and overall intensity. It was a spirited concert opener but a funny pairing with the Bates.

Beethoven’s Piano Concerto No. 1 in C Major rounded out the concert, with elegant yet powerful playing by Norwegian soloist Leif Ove Andsnes. The rhythm and runs sounded fresh and strong, without spilling into an overly Romantic sound. The Steinway grand piano even sounded, at times, like a Beethoven-era forte-piano. Andsnes played two Beethoven bagatelles as an encore, the second of which was satisfyingly dynamic.