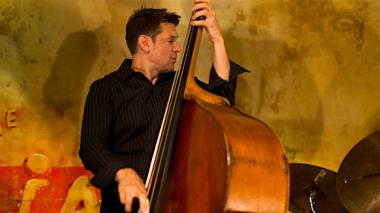 It’s tempting to describe Ben Allison’s music as cinematic, but the term doesn’t really capture the arrestingly detailed, coolly poised, and exceptionally entertaining nature of his compositions. While it’s easy to visualize characters, scenes, and plotlines to accompany his tunes, the jazz bassist writes and performs music that spins self-sufficient narratives, full of incident and personality.

At Berkeley’s Freight & Salvage on Wednesday, Allison performed with Think Free, a band that takes its name from a quintet album he released a decade ago with guitarist Steve Cardenas and trumpeter Shane Endsley, a founding member of the influential band Kneebody. Focusing on material from 2009’s Think Free and 2017’s Layers of the City (Sonic Camera Records), Allison, Cardenas, and Endsley were joined by Allan Mednard, a supremely musical player who is rapidly ascending into jazz’s crowded top tier of drummers. 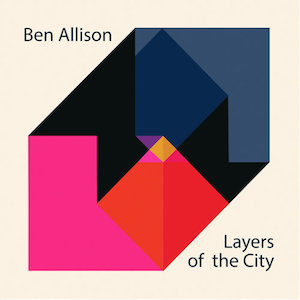 The band kicked off the concert with “Magic Number,” the opening track from Layers of the City, a slinky, slowly gathering piece that encapsulated everything that’s exhilarating about Allison’s music. He writes memorable melodies that immediately feel familiar but without a hint of cliché or quotation. Solos are integrated into the flow of the tune, elaborating on the melody rather than blasting off into harmonic outer reaches. And most importantly, he designs the pieces around finely calibrated group interplay so the music unfolds like a dynamic conversation, with thoughtful pauses, stream of consciousness segues, and unexpected revelations.

The effect is unfailingly dramatic. While Think Free doesn’t play chamber jazz in the sense that a high percentage of the music is fully notated, the absence of a piano (a chair filled by Frank Kimbrough on Layers of the City) provides the music with a welcome transparency. Alternating between a variety of mutes and his warm open-bell tone, Endsley expertly balanced humor, pathos, and wry observation while Cardenas, a brilliant and understated improviser, provided both tightly knit propulsion and expansive, arching solos.

Part of what makes Think Free such enthralling performers is that contrast between the band’s workmanlike stage presence and the vivifying detail of their soundscapes. It’s difficult to gauge the volume or intensity with which the quartet is playing by visual cues.

Aside from Allison occasionally breaking into a few dance steps with his stand-up bass as his partner, the musicians use minimal body English. The stillness lends a sense of efficiency to their execution, which goes hand in hand with the spacious feel of the quartet’s sound. On Allison’s unsettling ballad “Ghost Ship,” Mednard’s brush work propelled the quartet like gentle puffs of steam, crisp but cottony swirls of sound entwined around Cardenas’s sinewy guitar lines.

A boppish theme, the new, unrecorded “Breakfast with Eric” turned into a languid blues, while “The Detective’s Wife,” a sly, tartly knowing theme, advanced with the epigrammatic elegance of a Raymond Chandler riff. The concert reached a sumptuous climax with a fever-dream rendition of Neil Young’s “Expecting to Fly.” A band’s name doesn’t always reflect upon its sound or mission, but Allison and his bandmates fully inhabit the concise manifesto of Think Free.

Bass Virtuoso Larry Epstein Talks About Jazz and Life After the S.F. Symphony

The former associate principal bassist focuses on jazz these days, but his classical roots still nourish his music.