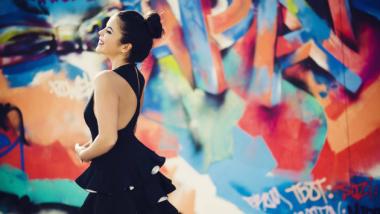 There was an uncanny moment in Berkeley Symphony Orchestra’s performance of Berlioz’ song cycle Les nuits d’dété (Summer nights), the opening number of their Wednesday, October 14 concert at Zellerbach Hall. In the fifth movement, “At the Cemetery: Moonlight,” soprano Simone Osborne sang of a ghostly graveyard encounter. At the moment the spirit passes through “a shimmering ray,” Berlioz interrupts the plush orchestration with glassy string harmonics played by two violin soloists and a single violist. This chilling depiction of cold moonlight provided the perfect introduction to the main event of the evening — the light-inspired orchestral work Laterna Magica by Finnish composer Kaija Saariaho.

Saariaho, who is currently serving as Bloch Professor in Residence at UC Berkeley’s music department, was present for the West-Coast premiere Laterna Magica. In her onstage introduction to the work, she explained how she derived the title from Swedish director Ingmar Bergman’s eponymous autobiography, in which he vividly describes the array of lighting techniques used by his photographer Sven Nykvist. This description, which is whispered by members of the orchestra throughout the piece, also inspired the form of Laterna Magica.

In an almost cinematographic manner, Saariaho depicts shifting lighting effects by juxtaposing blocks of sound dominated by various tone colors and acoustic effects similar to Berlioz’ use of harmonics. At certain points, the horns emerge in a kind of drooping chorale meant to symbolize the color red. Wind chimes and celeste sparkled on the surface of a shimmering string halo, which required the string section to play almost at the point of inaudibility.

At times these shifting planes of tone color felt a tad listless, but Saariaho attempted to remedy this through a contrasting musical element — ostinati (short, repeated, rhythmic motives). The composer explained that the process of speeding up still images to become a moving picture was reflected in her piece by exploring identical ostinati at different tempi. As the ostinati speed up, they change from melody to texture.

Laterna Magica’s ostinati ranged from jazzy, John Adams-like riffs to pounding Stravinsky-esque rhythms that seemed pulled from The Rite of Spring. A gamelan-inspired, percussion motive was paired with the orchestra members’ whispering to create a kind of ritualistic atmosphere of mystery. Flamenco rhythms, according to Saariaho, are also present in the score.

While conductor Joana Carneiro and the orchestra showed off their new-music chops in a fine execution of Saariaho’s work, Laterna Magica nonetheless seemed to lack a clear trajectory. Rather than working together, the two sides of the work make it feel confusingly split — should we sink into the hazy, light-inspired timbres or run with the pounding ostinati? While there are some beautiful moments, Saariaho often gets too absorbed in pure sonic beauty and the orchestral tone colors she has generated. [Simone] Osborne has a rich, youthful voice and a keen sense of drama

The same could be said for Berlioz’ Nuits d’été, in which melodic inventiveness is swallowed up in a luxurious sea of strings, making it hard to differentiate between the six movements. Yet the work’s flaws were almost forgotten after hearing Canadian lyric soprano Simone Osborne’s performance. Osborne has a rich, youthful voice and a keen sense of drama, especially in the almost operatic lament “On the Lagoons.” What is more, her French diction is impeccable — she would do well to incorporate more French roles into her repertoire as her burgeoning career unfurls.

The last piece on the program, Ravel’s obnoxiously repetitive Boléro, was clearly meant as a tie-in with Saariaho’s Spanish-inspired flamenco ostinati. However, besides this superficial similarity, Boléro had little in common with Laterna Magica. While the Ravel is a crowd favorite, Carneiro might have taken better advantage of Saariaho’s presence and programed another work by the composer.