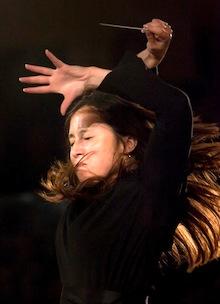 Thursday night’s performance by the Berkeley Symphony was billed as “The Shadows of Time,” after Henri Dutilleux’s eponymous symphonic poem of 1997, which served as the heart of the program. This proved an apt programmatic title for several, mostly felicitous, reasons. Indeed, the concert as a whole served to foreground various ways in which the experience of music can shape our perception of time.

Opening with the ephemeral reveries of Debussy’s Prelude to the Afternoon of a Faun, and closing with the epic narrative of Shostakovich’s Fifth Symphony, the evening’s performances had the odd effect of projecting an overarching sense of the passage of time accelerating. Although the Debussy and the Dutilleux, which made up the first half of the program, lasted scarcely more than half an hour altogether, each of these works creates a dreamlike world, with continually fluctuating textures, meters, rhythms, and tempos that variously accelerate, retard, and suspend awareness of time. By contrast, the simpler tonal gestures and clear neoromantic phrase structure of the Shostakovich, which actually lasts about 45 minutes, seemed to fly by in no time at all.

Having recently moved back to the Bay Area, I was hearing Joana Carneiro, the Berkeley Symphony’s new music director, conduct for the first time. Carneiro has a strong musical personality, which she communicates with passionate yet very clear physical gestures, and under her guidance the orchestra has made impressive strides toward developing a more disciplined and dynamic identity.

Although there was room for improvement, the performances on Thursday were, on the whole, very satisfying. Todd Brody’s carefully etched flute solo, which introduced the Debussy, promised a clarity that was sadly lacking in much of the first half of the concert. This was due, at least in part, to the truly dismal acoustics of Zellerbach Hall, which tend to swallow and flatten the subtle orchestral colors of works like the Debussy and the Dutilleux. I understand that Cal Performances has recently sponsored an extensive renovation of the hall, but to my ears there was little evidence of improvement on Thursday.

In the two French works, the orchestra created an appropriately warm wash of colors, a feature that Carneiro’s approach seemed designed to emphasize, though the focus on impressionistic haze often masked the more detailed linear nuances that make this music come alive. Although from my vantage point it appeared that Carneiro’s cues were well thought out and precisely executed, there were a number of small ensemble problems in the orchestra that exacerbated this problem. Attacks were not always as precise as they should have been, and in the Debussy, which felt a bit unsettled and hurried, the orchestra seemed to balk at the conductor’s attempts to make the tempo more elastic and breathe between phrases.

Although written on commission for the Boston Symphony in 1997, Dutilleux’s Shadows of Time inhabits a stylistic world that has much in common with European concert music of the early 20th century, with textures, orchestration, and melodic gestures reminiscent of Ravel, early Stravinsky, Britten, and Bartók. Repetition of distinctive motivic ideas is given an almost classical treatment, with clearly recognizable developing variations. At the same time, the orchestration of a number of passages shows a concern with ensemble timbres that calls to mind the work of the so-called “spectral” school of French composers of the late 20th century (featured last week in a wonderful concert by UC Berkeley’s Eco Ensemble, in a program that included Talea, a chamber work by Dutilleux’s student Gerard Grisey, which has become something of a classic in its own right).

The orchestra excelled in presenting the more vibrant and extroverted gestures.

As in the Debussy, Dutilleux’s subtle linear nuances were mostly lost during the more atmospheric textures in Thursday’s performance, often coming across as tentative and unfocused. On the other hand, though there were a few rough edges, the orchestra excelled in presenting the more vibrant and extroverted gestures. Especially noteworthy were the string basses and winds at the end of the central third movement, titled “Memorie des Ombres” (Memory of shadows), which the composer dedicated “to Anne Frank and all the children, innocents of the world.”

I was surprised to learn that Thursday’s concert was the first time that the Berkeley Symphony had programmed Shostakovich’s popular Fifth Symphony, in part because it was the work with which the orchestra appeared to be most comfortable. Of course, because of its popularity, along with the fact that excerpts are often included on orchestral audition lists, I am sure that most of the individual orchestra members have performed this work elsewhere many times by now. Furthermore, in spite of (or, arguably, because of) its complicated political history, the Fifth is a fairly straightforward neoromantic symphony, and its challenges include few of the fussy, detailed ensemble problems presented by works like the other two performed. In any case, Carneiro and the orchestra appeared to be thoroughly enjoying themselves as they launched into an enthusiastic reading of the Shostakovich, a reading that led to a well-deserved standing ovation.

Rare Treat From Ma and Ax